When Your Best-Laid Plans Go Up in Smoke 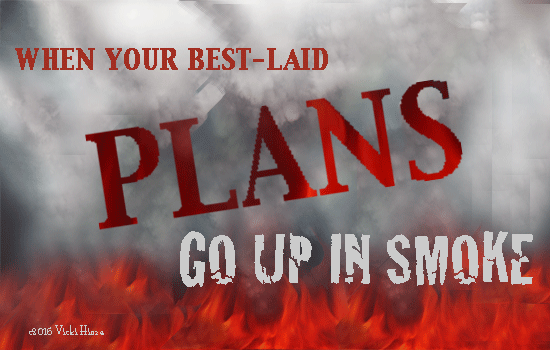 When Your Best-Laid Plans Go Up in Smoke

Things happen that are firmly outside of our control. That’s one of the most difficult-to- accept challenges in life.

For authors, if that challenge doesn’t surface in the writing of the book, it’s in the release of the book, or in the marketing of the book. It’s in something that no matter how much planning we do or how disciplined we are in sticking to the plan, we or the book is impacted and we’re relegated to the sidelines to watch. We see it happen, might even know in advance it’s going to happen, and yet we can’t prevent it. When it does happen, we are helpless to stop it. And, unfortunately, that impact is often negative.

Years ago, I recall a train full of books being sent to bookstores across the country. Along the way, the train derailed and the books were destroyed. The publisher elected not to republish the books but to take the loss. It was a wise fiscal decision for the publisher, but it negated the authors’ ability to earn anything more than the advance payment on those works. This cost authors, many of whom write a book a year, huge.

Yet the trail derailment was an accident. There was no one to blame or upon whom to focus that upset. Authors quickly discovered that no matter how much they struggled to write the best book possible, readers wouldn’t have the opportunity to read it. Today, they might get an ebook instead of a print book. Then, ebooks didn’t yet exist. The situation was out of the author’s control. The losses, simply put, had to be absorbed by the parties.

The same is true for the publisher, who struggled to publish the best book possible, and the bookseller, who strives to offer the best books possible that appeal to their reading shoppers.

The point is, in situations like this one, everyone is disappointed and suffers financial and other types of losses.  Yet, the event is outside everyone’s control and authority and all parties have to suck it up, accept it, absorb the losses, and move on.

It made for a rough time for many, and yet this wasn’t the most difficult kind of out-of-our-control upset that happens for authors.

The most difficult kind of upset is when something happens that requires a judgment call and things go badly.  The times when an author must weigh the totality of a given situation and decide whether to stick with the plan on a project or to alter it.

Not for the first time, I recently landed in a situation which required a judgment call. How will it turn out? It’s too early to tell, but frankly, it could go either way. The point is I wanted to share the experience. Hopefully, when other authors find themselves in situations requiring judgment calls, they will feel neither isolated nor alone. They aren’t. But unless we are open and discuss these events openly, when such a time happens to an author, he or she can certainly feel isolated and alone. Here are the details:

I started a series in 2014 called Down and Dead, Inc. It’s humorous, a dash of mystery, a dash of romance, and a tad zany.  This was a departure from my vintage suspense novels and from my Christian suspense fiction novels. So taking on the project was risky, but I queried my readers and they were intrigued by the concept and eager for me to do the books, so I began the series with Down and Dead in Dixie.

I did a second Down and Dead, Inc. project, Down and Dead in Even. In it, I established Dallas, Texas, as the basis for the foundation of the third project. This setting was not mutable, though the majority of the story does not occur there. It is the home base of the main characters and the inciting incident occurs in Dallas. The remainder of the story takes place elsewhere. In other words, Dallas is established in the second project and cannot be changed in the third one.

In 2015, I was deeply committed to other projects and couldn’t squeeze that third book, Down and Dead in Dallas, into my writing schedule.  I did in 2016, and finished the book in July—within days of the catastrophe in Dallas.  That event, while totally unrelated and nothing like the events in the book, laid waste to my publication plan and my marketing plan.

Technically, in so far as the book, Down and Dead in Dallas, is concerned, there is nothing to stop me from publishing it today—except my judgment that this is not an appropriate time to release a book with that title.  I can’t change the established title and a release now is, in my judgment, the wrong thing to do.

I had the dilemma:  To Release? To Not Release?

Some advertising funds are lost. Income is deferred, which shoots the budget in the foot. And some readers already familiar with the series are understandably disappointed at the publication delay.

The option existed to revise the book and have the main characters move before the opening of the book. While that is a solution, it alters the characters and the book in a lot of ways. The two months for a total revamp wasn’t a feasible solution because it negatively impacted multiple other projects currently scheduled for writing time.

I elected to delay publication and to absorb the losses, including momentum. The main basis for the judgment call I made was a sense of respect for victims, their families and the people of Dallas. They’re wounded and need time to heal. To me, delaying publication was the right thing to do.

So I’ll eat those losses which cannot be recovered, and wait until a reasonable amount of time has passed, and then release the book. I will do so, hoping that readers understand the reasons, and that in the interim, they don’t forget about the series. I also hope momentum can be regained. That’s always dicey, but hope springs eternal.

There are times when the best plans are trashed and left in tatters. That’s the reality. Sometimes the best course of action is clear and there’s no decision to be made, only for the results to be accepted. In a way, that’s actually easier on the author than those times when there isn’t a clear-cut response. The times when the author is called upon to make judgment calls. Or the publisher must.

The author can only control the judgment calls that are his or hers to make. Often, due to the conflicts created, the choice seems murky. Then, it is up to the author to cut through the clutter and to decide the basis for the call.

I can’t offer much on what should go into a decision seated in judgment. For me, it is a right versus wrong  call. A matter of respect. Of compassion and sensitivity. It comes down to, in others’ shoes, how would I feel if… Each individual knows his or her own criteria on judgment. And each will exercise it as s/he sees fit.

A word of caution: Don’t judge others for the decisions they make. If my kids were going to go hungry if I didn’t publish, I would publish. If deferring income meant I couldn’t make a mortgage payment, I’d publish. So would you.

So when someone makes a decision, before you whip off an “I’d never do that” comment, give that person the understanding you’d want in their situation. They have insight into their situations you lack.

Their reasons well may be born of necessity, and in their position, you well might react exactly as they have and do exactly what they are doing.

Most authors who have been writing and publishing for a while have run into out-of-their-control events. Few are spared. When your best laid plans suffer a major upheaval, remember that. Remember that others have endured and survived the fallout. Others have suffered losses. Many have paid dearly, and many—often the same authors—have recovered.

The ones who endured these challenges with the least amount of trauma are those who faced the challenge without bitterness and with dignity and grace, accepting the reality of the situation and focusing on doing what could be done to mitigate losses and move forward.

That minimizing of trauma is my ultimate wish for you.

Your best laid plans—some of them—will go up in smoke. But that does not mean you must go with them. That too is a judgment call you get to make.