When writers write a series of related novels, they often opt to connect the books by characters, setting, or circumstance.

For example, my Seascape series is set in a Bed and Breakfast in Maine. All of the novels share that setting and the secondary characters are people at the inn and in the surrounding village. I did the same type of related novels in the Crossroads Crisis Center series, creating a two-prong connection in each of the related books using setting and characters (secondary characters, in both cases).

Many authors will use a single main character, supported by a cast of recurring secondary characters, to create a series. Think of Jack Reacher, Stephanie Plum. Or a series of recurring characters, like in my War Games series. It’s built around a team of special operations individuals. In the first book, I have one team member as the protagonist. The story is predominately told through her point of view, from her perspective, meaning everything else relates through the prism of her vision. But there is also a second team member who acts as friend and confidant, and that provides a vehicle for info-sharing by showing versus telling and gives the reader the opportunity to better know this secondary character. In the next book, that secondary character moves into the protagonist’s slot and a third team member takes the secondary confidant’s position. That sets up for the third book.

Those series connected the novels by characters—teams of operatives—by setting—the team’s Home Base of operations—and by circumstance—the team was assigned a mission to complete. Having all three connections provided the added benefits mentioned above, but also gave a broader scope to their goals, motivations, and conflicts. The obstacles were greater, the consequences of failure were greater.

Early on, I did the Lady series, which ended up being two books. Why? Because the types of stories required a large character cast. The first book was about three separate groups who did not interact. So it wasn’t logical that protagonist and her group would interact directly with the antagonist and his group to stop a third villainous group from destroying the world. That large cast, while fine for many novel types, did not work well for romantic suspense, where a great deal of the novel is focused on the development of the relationship between the heroine and hero and develops as they confront the obstacles in the external conflict. Had I written the story as a straight thriller, it would have been fine. I didn’t. So while it was well received, it was atypical and more difficult on reader expectation. I learned from that, and avoided it in future series.

Many series have been written that are about a single family, a single place, a single event. Some authors have built careers on these types of related novels. Brothers or sisters, or generations of a family.

Expanding beyond that, there are series that are related by geography. Remember the Wagons West series, where a story was written and titled chronicling the move to populate the west? Independence! was the first, if memory series. And near that time there came a similar series on the White Indian, and we followed those chronicles.

In both cases, there were recurring characters but the focus was on the move west, on the experiences of the Indian. Characters who had been protagonists appeared in later novels, which readers enjoyed. They got to see what happened in the next chapter of those characters’ lives. That’s always held appeal to writers and to readers. And that, what happens next, can be incorporated into many series regardless of what the author uses to connect the books.

A series can be related by an object. An amulet or other piece of jewelry. A wedding dress. A clock or painting or time machine. All have been used. The key to the series is to set the rules for the object and stay consistent. You might reveal untapped powers or abilities, but the previous rules established remain intact, or if they change, the reason is logical and plays out on the page. That’s playing fair with the reader.

In the thematic series, the books have a recurring theme. They don’t share the same characters, they might not even contain the same sub-genres, though they should share the same genre so reader expectations’ are met. In this type of series, the books are standalone books, meaning you can read any one book and have the whole story on those characters. The next book will be totally different: different characters, different setting, different circumstances. The theme is what is consistent.

You do want the same genre so the reader knows what type of book s/he is getting. All romance. All mystery. All fantasy. But you can delve into different subgenres, provided the theme remains the same.

For example, my Reunited Hearts series is a thematic series. Here are the books: 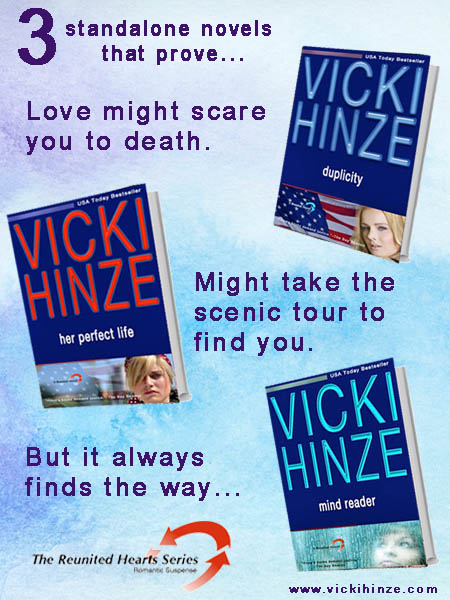 The novels are diverse. They don’t share common characters, setting, or circumstance. They are standalone novels. What they do share is a common theme. Each is an atypical reunion story. Two people at odds or forced apart are reunited and love gets a second chance.

When you craft a thematic series, you do want to provide similarities for the reader. Things with which you feel the reader will bond.

I’m sure there are other secondary connections between the books, but those listed are intentional repetitions. When writing thematically, often the author makes multiple connections or includes multiple recurring threads or sub-themes that are subconscious connections because of the way the author thinks. S/he isn’t really aware of them, but they appear on the page because they’re the natural outgrowth of the author’s perspective and view and even the way s/he approaches novel construction, obstacles, conflicts and resolutions.

It is that instinctive writing that permits an author to write a book early on and years later write another, and still later write another and yet all three contain a lot of thematic connections. For deeper insight, you can read more details on these three: overviews, first chapters, reviews, awards, etc. on their book pages: Her Perfect Life, Mind Reader, Duplicity.

Some other thematic series would be those in which all the novels are protector stories, stories about someone falsely accused, betrayed. Unlikely heroes, fallen heroes, mistaken identity—the list is endless.

When you do thematic series, the most important thing to remember is to be mindful of reader expectations and work to get those secondary connections in all the books so that you do your best to meet the readers’ expectations.

Give readers commonalities that run true book to book. Common threads that carry the same kinds of emotional reaction. Things to which all of the characters could relate.

No author wants to fail readers. We write to entertain! Including a strong, universal theme and relatable secondary connections gives the reader a vehicle so that s/he can enjoy the thematic series journey.

← Previous Link: Prev: The Lowdown on Loyalty Next Link: Next: Memorial Day →

END_OF_DOCUMENT_TOKEN_TO_BE_REPLACED

END_OF_DOCUMENT_TOKEN_TO_BE_REPLACED
Manage Cookie Consent
To provide the best experiences, we use technologies like cookies to store and/or access device information. Consenting to these technologies will allow us to process data such as browsing behavior or unique IDs on this site. Not consenting or withdrawing consent, may adversely affect certain features and functions.
Manage options Manage services Manage vendors Read more about these purposes
View preferences
{title} {title} {title}