In 1775, The Continental Congress began a tradition in America that has endured. They proclaimed the observation of a national day of prayer, citing: “a day of public humiliation, fasting, and prayer.”

The tradition continued with a day of prayer and thanksgiving proclaimed by George Washington, and it was Abraham Lincoln who signed a Congressional Resolution for fasting and prayer. He did so during the Civil War.

This tradition continues today. We don’t hear as much about it now as we have in days past. There was a time when reminders of the first Thursday in May being set aside as the National Day of Prayer was a huge event, headlines.

In the past few years, we hear less and less about the National Day of Prayer. That is both a tragedy and a disservice to Americans because this nation was founded on the premise of freedom of religion. It was for that purpose that immigrants came here—to escape religious persecution. And it was with the recognition by founders of this nation that rights conceived in the structure of civil society in this nation were endowed by our Creator.

Our nation is plagued with troubles today. It and many of its people are suffering. We need healing. In the Bible—the first book printed in the United States so that every child in school had access to and could read it—we’re told to turn to God and from evil ways and He will heal our land.

Today is the perfect day to do so. Today, on this National Day of Prayer, if we pause and think beyond ourselves to the health of our country, we will realize the most significant thing we can do to help ourselves is to pray for our nation.

That is the most important thing we can do for it, and for ourselves. 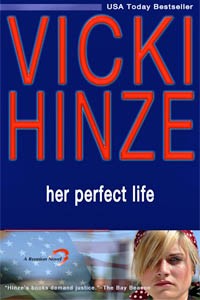 © 2014, Vicki Hinze. Hinze is the award-winning, USA Today bestselling author of nearly thirty novels in a variety of genres including, suspense, mystery, thriller, and romantic or faith-affirming thrillers. Her latest release is The Marked Bride, Shadow Watchers, Book 1. She holds a MFA in Creative Writing and a Ph.D. in Philosophy, Theocentric Business and Ethics. Hinze’s online community: Facebook. Books. Twitter. Contact.www.vickihinze.com.