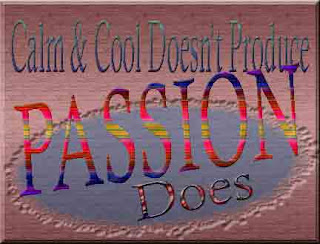 Calm and Cool Doesn’t Produce. Passion Does.
Recently, I listened carefully to opinions on disposition and their value regarding a discussion between two people that held opposing views. One was passionate, one was calm and cool.

Afterward, there was a lot of post-discussion debate about which demeanor held more value. The consensus left me scratching my head. They opted for cool and collected, the least emotional of the two people being debated.

I thought just the opposite. The one who spoke with passion infused what he said with purpose and vision. He clearly felt deep convictions about what he was saying. This was acknowledged in the group discussion, and yet they gravitated to calm.

I love calm as much as the next person. I seek it and go to great lengths to preserve it. But calm doesn’t bring out the best of us or encourage us to dig deeper, to play like Einstein or Ben Franklin and do that experiment for the thousandth time or the two-thousandth time–whatever it takes.

← Previous Link: Prev: Creativity During Chaos Next Link: Next: Dueling Characters: In Them, Story Strength →

END_OF_DOCUMENT_TOKEN_TO_BE_REPLACED

END_OF_DOCUMENT_TOKEN_TO_BE_REPLACED
Manage Cookie Consent
To provide the best experiences, we use technologies like cookies to store and/or access device information. Consenting to these technologies will allow us to process data such as browsing behavior or unique IDs on this site. Not consenting or withdrawing consent, may adversely affect certain features and functions.
Manage options Manage services Manage vendors Read more about these purposes
View preferences
{title} {title} {title}