BORN TO BE BLESSED—TWENTY FOUR YEARS 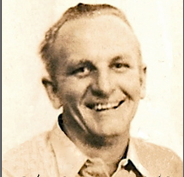 BORN TO BE BLESSED—TWENTY FOUR YEARS

My dad is on my mind today.  A lot.  It’s the 24th anniversary of his death.  We lived three states apart at the time, and he sent for me—and waited until I arrived and we said good-bye to pass.

That hurt then, but as the years pass, I have so often been grateful that he gave me that gift.

He’d been sick for thirteen months.  In and out of the hospital.  It’d been a hellish ordeal for my mother and for me.  The kids were young, Hubby was still active duty—commitments were plentiful all around.  I couldn’t physically be there as much as I wanted, and he knew it and forbade my mother to tell me he was in the hospital again until the wee hours the morning of his death.  She called.  I went.  It was a hard drive—not because of traffic but because she said, “He told me that he wants to see you one more time.”

My dad didn’t wax enthusiastic or have a flair for the dramatic.  I knew what he meant—this time is the time.  And the miles went by so slowly because I did.

As you can imagine, memories bombarded me the whole way.  Some were good.  Some were hard.  All were bittersweet.  I won’t get into the weeds with them, but I will share that when I arrived at the hospital and we talked, he was in out of lucidity.  At times, he thought I was his mother.  At times, he’d call me Tiger, which he did my whole life (and probably explains why on the rare occasions he wrote “Vicki” he spelled it wrong.  Tiger, he always got right.

While he’d been drifting in a morphine haze, minutes before his death, my dad sat up, clear-eyed and totally lucid.  The last words he said to me were, “God bless.”

Even as I type this now, a lump forms in my throat.  While we often talked about God, and we both have always believed in God, that is the first, last and only time, my father sought God’s blessing for me to me.  Whether or not he prayed for it, I have no idea.  But this once, I heard it myself.  And it changed me forever.

I haven’t spoken of this before now.  Not specifically.  It cut too close, meant too much.  But I’ve come to realize that those are the very things that most should be spoken of and acted on.

But I was wrong.

Those things are incredibly important—vitally important.  But the single greatest gift a father or mother can give his child is to ask God to bless that child.

While parents can love wholeheartedly, they are still human and thus flawed.  But God is flawless.  The perfect parent with the clarity of perfect vision and unconditional for the child He entrusted to those parents.

Children are born to be blessed.  By their fathers and mothers, and as parents, it is their duty and privilege to seek God’s blessing for their children.

The more that I’ve studied the Word, the more I understand the significance of parental blessings being sought.  The investment and formal beseeching, entrusting your most beloved to your Heavenly Father.

Today, I’m a bit sad, as a well-loved daughter who misses the daily interaction with a much-loved parent.  But I’m moved, too, that my much-loved parent sought God’s blessing for me.  And I’m beyond moved that my Heavenly Father reaches out in ways significant to me—signs if you will—offering comfort, letting me know He is with me.  And that let’s me know I am blessed.

Parents, if you haven’t, bless your children.  I’ve shared this so you’ll know it’s no small thing—and it, like your love for them regardless of where you are, endures.

← Previous Link: Prev: The Truth About Us Next Link: Next: LIES AND LIARS →