WHAT HAPPENS WHEN SOMEONE LIES?

WARNING:  This is a no-edit zone… 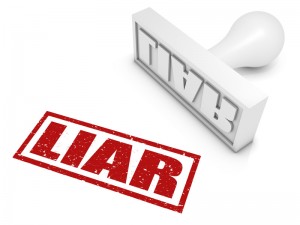 This works in creating fiction.  The author makes an assertion—establishes the premise.  Then the author adds vivid details that support the assertion.  That might be in the form of other characters, events, or statements.  Specifics is the key in establishing a premise.

But a premise can’t be asserted and accepted indefinitely.  It has to be reinforced to give added support and weight to it.  So the writer backs up the premise using other characters, additional details that substantiate the assertion, or an event that reinforces the assertion as credible.

Later in the novel, the assertion is tested and there proves true or, in the case of a lie, the truth is revealed.  This revelation may be disappointing or stunning, depending on its nature and role in the story.

In a romantic comedy, the author asserted a dress was “bad luck.” (Established the premise.)  Not just any dress, a wedding dress.  From that point forward in the novel, events occurred to prove the point (Reinforced the premise.)  At the end of the book, the premise proved false—and the reader rejoiced. (Revelation.)

Lies work hard in fiction.  They generate conflict, act as catalysts to deeper truths, provide story fodder to create situations and events that the author requires to tell the story s/he wants to tell.

In some cases, the lie becomes true.  Example.  A woman wanted to get married.  She hired the minister, booked the church, planned the wedding and reception down to the guest list and cake.  What she lacked was a groom.  But as events unfolded, and she worked toward her goal, she had prospects.  And by the end of the book, her perfect wedding had her perfect groom.  Her lie became true—and to the author’s credit, it was as a result of the efforts of the bride. 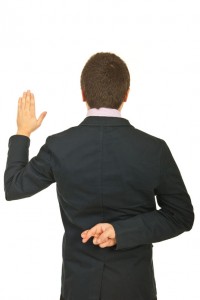 Lies do work in fiction.  But they also have consequences and can sever relationships, instill doubt and break trust.  The examples I’ve cited have been positive ones.  But there are as many if not more examples in fiction where lies destroy.

How could the results be any different?

In life, when someone lies to us, what is our reaction?

We emotionally react, depending on the consequences of the lie.  We are upset, disappointed, devastated.  We’re angry, feel used, abused, betrayed.  Doubt has been interjected and we now doubt every single thing the liar has ever told us about everything.  If one lies once, s/he could again.  Trust has been broken.  Our perception of that person as one we could trust in what s/he says and does, dissipates.  Suddenly all we thought we knew and all we believed is in doubt.

That can create an enormous amount of conflict and a lot of angst and anxiety.  Those things are great in fiction.  We need them for good stories and storytelling.

In life, we lose respect for the liar.  We doubt everything s/he says or does—actions, words, intentions and motives.  The more deeply we’ve invested in the liar, the stronger the impact is felt.  We don’t trust.  We resent.  We are disappointed and we do feel violated.  We might forgive, we don’t forget, and we no longer trust or respect.

Lying carries steep consequences in life.  It destroys families, friendships, faith in those others.  Again, the depth of our injury and insult and reaction is directly related to the depth of our investment in that person or those people.

In specific story situations, the consequences of lying will be exactly as steep—the objective is that fiction mirror life.  The people and events might be fiction, but the emotional reactions mimic those in life.  This is the means through which readers connect with the characters.

One of the greatest challenges in fiction is redemption of the liar.  One unredeemed is typically punished.  But the redeemed might or might not work back into readers’ good graces.  The resolution is necessary to do that, and that resolution should include a confession and repentance, if you will, where the liar apologizes and does all s/he can to make “right” his/her “wrong.”  Full out honesty and accepting personal responsibility for one’s own actions increases a desire to forgive.  That forgiveness is key.

On the rare occasion that confession/repentance/revelation of truth and attempt to make it right doesn’t occur and the story still works.  The situation is that the character does the wrong thing for the right reason knowing s/he is sacrificing himself for the sake of another.  That, readers will forgive.

Broad scale lying is tougher.   If a character lies to a group of people, some will get over it, some won’t—regardless of what the liar does to make things right.  Some will have expected nothing better from the liar, feel the exposure of the lie proves them right.  Some will be devastated, some will blow it off saying all people in that position lie.  So the author gets a variety of responses.  That can be useful in storytelling as well.  The meat of the story though remains with those who have the strongest emotional reactions.  We love and hate, but to the in between, we’re indifferent.  That’s the one thing readers do not want, and authors definitely do not want.

Lies can be useful storytelling tools.  We’ve all been lied to or about and that makes lying a universal emotion—one most people can relate to and have experienced.  That’s a big benefit to the author in creating reader-and-character bonds.

Not that it needs saying, but lying is not recommended outside of in creating fiction.  There’s a host of reasons why, but because the reaction is universal, no explanation should be needed. (If you do need one, feel free to contact me and I’ll fill you in. :))

P.S.  If you haven’t signed up for my New Release Alert REMIND ME and/or occasional Newsletter, please do so.  Would love to welcome you.

P.S.S.  A huge THANK YOU for your support on my new release, SURVIVE THE NIGHT.  I so appreciate it (and keep the feedback coming.  I’m deciding whether or not to write more than the initial three in this series so what you think is really important to me).