When the Unexpected Happens 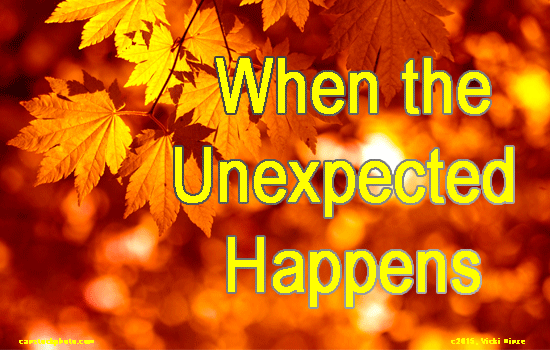 When the Unexpected Happens

We cruise along in life and something unexpected happens that turns our world on its ear and has us re-evaluating everything.

Recently, I had such a moment.

I’d broken a tooth over the weekend, had the damage evaluated on Monday, and on Tuesday morning I had a dental appointment for the repair. Just before leaving, I received a text from my beloved daughter-in-law. There’d been a shooting. The schools were on lockdown.

That rocked my world. My daughter is a teacher and two of my angels are students in two of the schools impacted. Nothing strikes fear or fury in the heart like danger to your children and grandchildren.

The messages flew back and forth from us, fast and furious, trying to determine what was going on in our peaceful town and if our family members were safe. The wait was harrowing, as I’m sure it is for all in such a position.

Everyone it seemed had different tidbits of the story. But I have to tell you, I was relieved to finally hear from my daughter that they were on enhanced security procedures as a precaution. More relief came with hearing the shooter was barricaded in a hotel room and surrounded by police, sheriff’s deputies, fireman and even fish and wildlife management officers. Everyone responded.

After a long wait that seemed much longer (as tense moments always do), we were told the shooter was in custody, and the victim, a sheriff’s deputy was in critical condition and in surgery. The schools were back to business as usual.

A lot of prayers went up, a lot of tension ratcheted down. A lot of thinking and deep breathing while reassessing went on. Everyone remained on edge, upset and struggling to return to normal. I can’t speak for others but focusing on anything else the entire day just didn’t happen. I worried about the deputy, his family, his fellow officers. Worried about what that “in custody” meant on the shooter. Some said he’d been killed; others, that he’d been arrested. Rumors flew. In situations like this, they always do. And either way, the threat to the public was over and notifications had to be made before public statements could be released. Heaven knows, no one should have to learn the fate of one they love on the news.

Late in the day, the public learned that the deputy, who had been critically injured and taken to surgery, had survived the surgery but died shortly thereafter. He had retired from the sheriff’s office but returned part-time to earn extra money to take his family to Disney World.

And the shooter, who had barricaded himself in a motel room, had died in a gunfire exchange with law enforcement. He’d been served on a domestic violence offense and ordered to surrender his firearms. He’d claimed the weapons were in his vehicle, and when the deputy had gone to retrieve them, the shooter shot the deputy in the back multiple times and in the back of the head.

This drove home the fact that none of us are immune. That pervasive challenges impact us all.

And that made the incident a defining moment. My thoughts and prayers are with the deputy and all who responded: local police, firemen, fish and wildlife—all hands were on deck. Their response time? Four minutes. Impressive—and proof that time isn’t measured in minutes but in moments. I’m sure it seemed a lifetime to the deputy. I know how the minutes dragged waiting to hear from my family. It had to be a hundred-fold worse for them.

Our town has always been sleepy, peaceful and calm. But this day changed us. We will be forever more mindful that there is no immunity. We’re all impacted by all. And that definition has been indelibly imprinted. No one can afford the luxury of taking anything in life for granted. It can change on a dime. Not just by your own actions, but by the actions of others. By strangers.

We’ve all heard it, known it, but we haven’t really experienced it, and that makes our perspective lens a lot longer when reality gets in our face and bites us. When that bite happens, we accept that things are different. Life is different. And knowing it drives home the truth that one minute you can have a perfect world and the next, through no actions of your own, your world can be shattered.

The unexpected can happen to you, to me, to us any day. All that’s required is a single defining moment. And aware of it, we dare not take life for granted.

← Previous Link: Prev: Faith Zone Notes: Wants and Needs Next Link: Next: The Benefits of the Graceful Exit →