What About the Refugees? The Balance Between Compassion and Common Sense 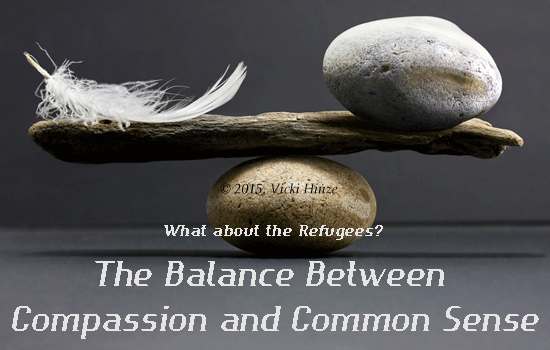 Since the attacks in Paris, I’ve received a lot of notes from people who are having a hard time finding a balance between compassion and common sense, particularly on the issue of America taking in refugees.

Where’s the balance? Is there a balance between being compassionate and being sensible?

There is. Innately, most know it. But the pressures of the outside world, playing politics, slurring those who exercise it, using manipulative tactics and degrading means make us question ourselves and our motives work hard to blur the truth. The thing is, the truth is, and, for those it seek it, it will be revealed.

We need to recognize what those who are engaging in blurring are doing and why they are doing it. Then we need to shelf the nonsense and look at the challenge for a solution that is both compassionate and sensible.

Fast forward to today, post the Paris attacks and slaughter of over a hundred thirty people, the injury of hundreds more—random killings, not targeted beyond being people in France.

While we are a nation flirting with disaster due to debt, and while we are war weary, we must accept the fact that in this war, we don’t get to choose. The choice has been made for us by those attacking us, who will continue to attack us until they achieve their objective. Being at war isn’t our decision. They’re coming after us to kill us no matter what we think about it.

What is our decision? Whether or not we will fight back. Whether or not we will defend ourselves, our homes, our loved ones, our country. In that, we do get to choose. Oh, we’re supposed to have been fighting back for a long time. But we haven’t been. When at war, you fight to win. You don’t fight to run out a clock or to keep the hounds at bay until someone else can take over. You fight to win. We haven’t done that.

If we had, there wouldn’t be munitions depots and training camps still standing and only now, post Paris, being hit. Our military wouldn’t fly sorties on missions and need to return with their bombs because the rules of engagement won’t allow them to shoot the enemy. The pilots wouldn’t have to do fly-bys to warn truck drivers hauling black-market oil to black-markets to get out of their trucks before targeting them. It’s impossible to fight a war with zero civilian and zero collateral damage. Our military makes every effort to minimize but zero is not possible. So their hands have been tied by their current rules of engagement.

What we are seeing is really rather remarkable. An enemy launching an offensive elsewhere and simultaneous terrorist attacks in its adversaries’ homelands. And we sit with our hands tied without a strategy to win. Is it really a surprise that we’re losing?

That’s another topic for another day. Where’s the balance? How can we retain the spirit of who we are in regard to the refugees, honoring our nature and beliefs, and not ignore the stated threat and intention of our enemy? Bring refugees here and some, as we’re told, will be terrorists bent on killing us. Not bring refugees here and turn our backs on the plight of those in trouble. What do we do?

We seek a sensible solution that considers both compassion and sense.

As I write this, this morning, I’ve just learned that Paris is warning its citizens of the potential for biological and chemical attacks. The Vatican, Milan, and Washington DC have been warned that they’re being targeted; the commentator said, “credible threats.” Our leaders haven’t seen fit to warn us, and I fear the reason for that is political.

A bill in the House of Representatives (and sponsored by some of our security entities) will be voted on today regarding refugees. Asserting that importing them to our nation be paused until assurances that they are not terrorists infiltrating can be determined. The first job of the federal government is to protect the American people. That we’re not being advised of the increased threat tells us we need to seek our news elsewhere.

This information does factor into a compassionate, sensible solution. These are not minor or ancillary factors in assessing the challenge or the solution. Nor is the fact that Americans define themselves. They choose. They determine their own fate in actions and deeds. No one else, including terrorists, chooses for them.

We should also be mindful that the terrorists are extremely well funded. A billion dollar black-market oil sales (mainly to Turkey and Jordan) and wheat sales (they hold 40% of that market there). We should be mindful that a lot of weapons, including biological and chemical, can be bought with that kind of money.

We should also be mindful that the guilt, and sophomoric slurs being thrown at us by some deemed leaders require scrutiny because their concern now in bringing refugees here was decidedly absent when citizens of Syria were being ignored and their status as refugees was being defined. In other words, where was the concern for “widows and orphans” when they were under attack in their homeland and being made refugees?

There is a balance between compassion and sensible. Neither is mutually exclusive.

In the US, when there is a threat, what are we told? To shelter in place. If it is good enough for us, then it is good enough for the refugees. You see, the choice on what to do isn’t limited to bringing them here or doing nothing. The narrative might be being presented that way (again, I fear for political reasons), but there’s a viable alternative. Shelter them in place.

With the French, the Russians, and the US and others, being actively involved, there’s no reason to not create a safe zone in Syria and protect the refugees there. Help them there.

The benefits are less risks to all the nations attempting to offer relief and assistance to the refugees that is more aligned with their own cultures. Before you blow that off as insignificant, consider the shock of everyday life in Syria being replaced in a swoop with daily life in America or in France, England, or Germany. Can you imagine the trauma of adjusting?

If you’re an innocent refugee, you’ve lost everything and now you’re plopped into a country with strange laws, strange ways, and strange everything. That creates additional strain physically, emotionally and spiritually. It makes a difficult situation nearly impossible—particularly if all you want is to go home.

No one seems to be asking refugees, “Are you wanting to come to America to be American? Or are you just not wanting to get killed in your homeland?”

Before you think that’s insignificant, ponder on it. Imagine yourself in that situation. Imagine how you’d feel and what you’d think. The ways of the people in other countries are not your ways. Their outlooks and perspectives and dreams are not your dreams.

So create a safe zone and protect it. Assist the refugees sheltering in place there. Help them to help themselves in their country. Their culture, their homeland, their laws—the familiarity of what makes that homeland their home. They have a vested interest in it. They love it as we love America.

That is the balance between compassion and common sense. Sheltering in place offers the refugees respect and needed aid without requiring them to forfeit their country and all that goes with it to make them who they are.

As I said before, we are at war. We don’t get to choose on that. The terrorists are going to kill as many of us as they can, and it is our decision to either let them or to fight them. Believing we can talk our way out of war, or them out of their quest, is delusional and, contrary to the assertions of some, we are not a delusion people. We are compassionate and we are sensible.

We want to help those in trouble; it’s our nature. And we can help without further jeopardizing ourselves. That’s important not only for our own survival, but because, if we’re dead, we can’t do a thing to help anyone else ever again.

That’s the key component too many are forgetting and all should be remembering clearly.

If you’re one who has been torn about this challenge and trying to determine what is the right thing to do, I hope my thoughts here helps.

Sheltering in place is a reasonable, sensible solution that respects the refugees and Americans. That’s balancing compassion and common sense.

This is my assessment and my solution. Others will see things differently, and that’s fine. It’s fantastic, actually, and bound to produce even more refined, better solutions.

In the end, Americans will assess and conclude, and they will make their conclusions known to their leaders. Those leaders will either adopt or ignore them. On this, we can but hope the people’s choices are not ignored, because it is their lives that will be placed in jeopardy. Leaders have protection. It’s citizens who are vulnerable—and they won’t forget being ignored or being made vulnerable.

Bottom line, assess and conclude. Coming at the challenge seeking a win/win result will give you the mind and heart for what you’re doing. And working with both, you’ll reach conclusions that rest easily on your mind and shoulders, and on your heart and soul. They’ll rest easily because you’re not closing your mind or heart but opening both wide, seeking the best possible solution. And that is compassionate. And Sensible.

← Previous Link: Prev: Faith Zone Notes: Enemies Among Us Next Link: Next: Helping Each Other During Tough Times →