The Difference One Letter Can Make 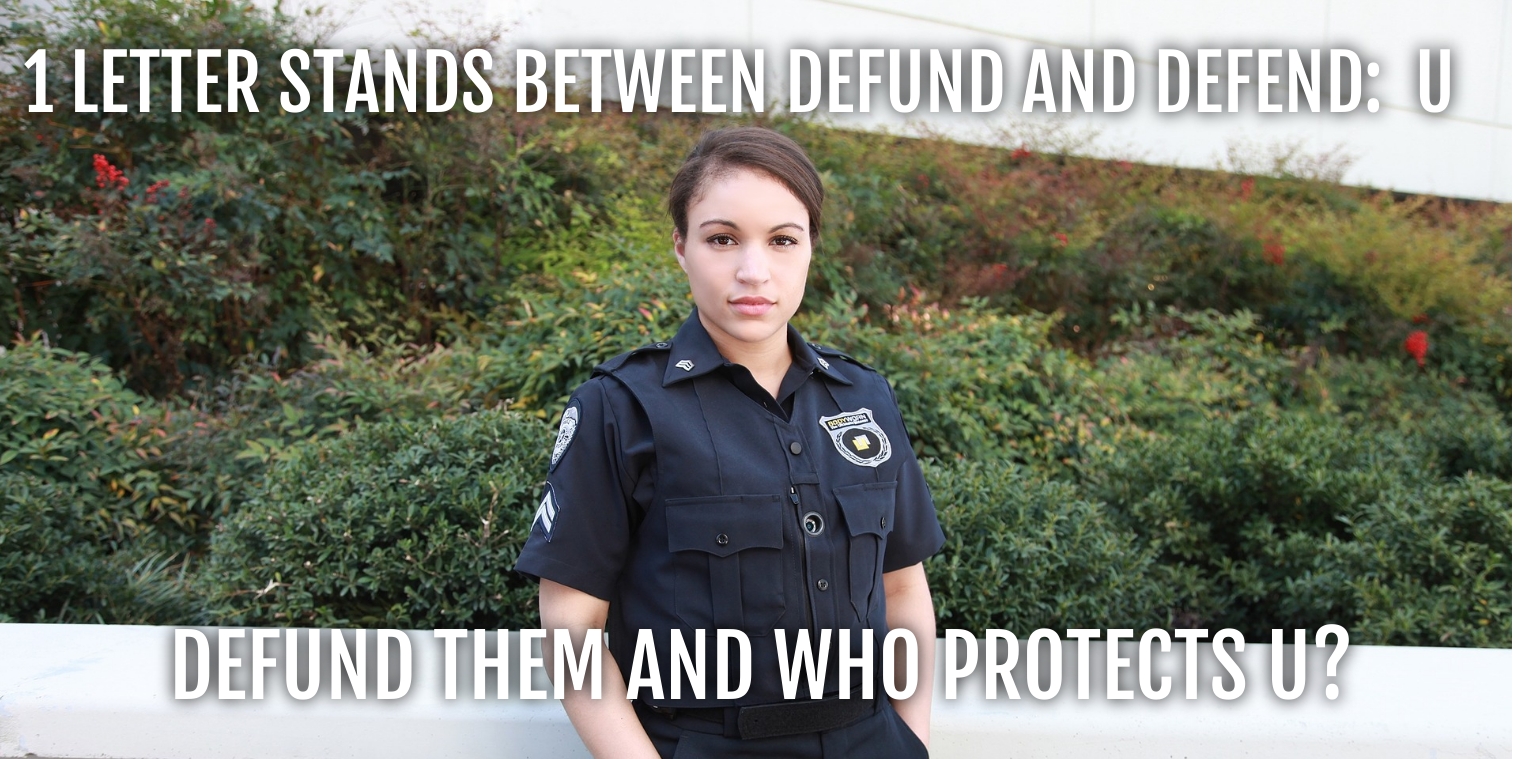 What happened to George Floyd was wrong and everyone knows it.  Everyone agrees it’s unacceptable and should never happen again.  Everyone agrees the officer with eighteen complaints should have been stopped long before this incident.  But he wasn’t.  And here’s where we are.

Skip forward past the united outrage to protests, then riots, then looting and destruction.  Then to defunding the police.

Put your emotions in a box and think.  Critically, think.  When you saw the video, you were appalled.  You were outraged and disgusted.

Now step back.  Clear your mind.  And put yourself in a police uniform from anywhere else in the country.  From that same department.  Watch the video again—from inside the uniform.  What is your reaction now?

You’re appalled.  You’re outraged and disgusted.  AND you are betrayed.  Betrayed that a brother in blue would do this.  He took the same oath to serve and protect that you took.  He joined the force to do just that, to make your city or town or state or nation a safer place for families to raise their kids and walk the streets without fear of harm.  He or she gets up every morning and hits those streets, taking on the risks of not coming home to his own family because s/he believes in something bigger, something that must be preserved for people to live free:  law and order.

Watching that video from inside that uniform, and you are ashamed of the offending officer.  You know that far too many are far too emotional to remember that the actions of one are not the actions of all.  You are just as upset—even more so—than others, because you know that you will be painted with his brush, though you have done nothing wrong.

Still standing in that uniform, you watch your mayor and governor and state legislators abandon you and your fellow officers.  They throw you under the proverbial bus, subject you to verbal and physical abuse, because they aren’t worried about you or your career or how hard you’ve worked or how many risks you’ve taken or even how many lives you’ve saved.  They are worried about their re-election.  Winning it.  That’s what most matters to them.  Long ago, while citizens slept, trusting leaders to lead as citizens would lead, the meaning of public service and public servants fell to an insatiable hunger for power and control.  There are, of course, exceptions, and you know that.  But you look around and see far too few of these leaders stand up for the people or for you.

Given no choice, you must accept that you’ve been betrayed and abandoned, and you’ve done nothing wrong.  You stand falsely accused, condemned and convicted not because of any action you took but due to your uniform and your sincere belief in law and order.  Your desire, often a lifelong desire, to serve and protect.

Someone else commits the act.  You live with the fallout.

There is good and bad in everyone, including officers.  But right now, emotion is ruling the day.  Thinking is muddied by rage, and that rage is being misplaced.   In this, you cannot blame an entire group of professional law enforcement officers for the actions of one.  Regardless of what industry or profession you work in, there are those who excel at it, and those who do not.  Those born to do what they do, and those who belong elsewhere but have not yet realized it.

An anchor on TV asked if the police were defunded, and someone broke into her house in the middle of the night, who did she call.  The answer was realizing her privilege.  How do you think that anchor is going to fare against an armed intruder?

Another responded to that same kind of question with a recommendation to sit down and talk with the perpetrator and work it out.  How do you think that home invasion is going to resolve?   Think the homeowner who has been invaded fares well?

In Minneapolis, the day the defund talk started, they began a push for “communities policing their own.”  Citizens would get rid of the police and deal with the crime in their communities.  Untrained citizens who are not professional law enforcement officers.

Let’s take an unemotional look at a few situations and see what we think:

You see the point.  Imagine all the different types of challenges—school protection, assaults on the street, complex RICO cases, hostage situations and everything in between.  Citizens are simply not equipped, trained or in many cases willing and able to meet those challenges.  Why would people take those who are trained and willing out of the picture and insert those who are not?

During the recent riots, 25,000 businesses were destroyed that won’t be coming back.  For those, their dreams are dead.  They must live with having done nothing wrong, but as a result of the actions of others, are now not in a position to rebuild and start over.

Now think about the impact on that community these businesses serviced.  Drug stores—gone.  Car parts (best not breakdown!)—gone.  Grocery stores—gone.  Who lives without them?

Some say the federal government should have stepped in faster and with a firmer footprint.  Yet they ignore the fact that we live in a republic.  The mayors and governors and state legislators run the states.  It is on them to protect and defend the citizens in their states, and if they need help, to ask for it from the federal government.

To those casting blame at the president and federal authorities, it would be wise to study how your government works.  These challenges are the result of mayors and governors not executing their duties appropriately.  That’s a simple truth.

And it’s also what makes defunding the police an emotional and, I’m sorry to say, irrational response.  Up to eighty percent of the rioters were from out of state.  They infiltrated peaceful protests with ill intentions, fake identification, and stolen license plates on their vehicles.  They were flown in, driven in on buses, and many were paid to riot and loot.

There were pre-staged pallets of bricks, ready for grabbing to destroy property that wasn’t theirs.  There were sticks, metal pipes, concrete milkshakes (to cause head injuries to those struck, many of whom were Secret Service agents guarding the White House), tennis balls filled with concrete, weapons and Molotov cocktails and other incendiary devices and bombs.

Those with the training and the desire to protect citizens are defunded and no longer on the job.  Are you aware 300 NYPD officers retired last week?  That 600 spoke to their superiors about resigning or retiring and might yet do it?  That hundreds were injured in the riots, and many were hospitalized for those injuries?  They faced everything from being run down by cars to being shot in the back of the head to being stabbed in the neck.  And that doesn’t take into account the verbal abuse.

Who is going to step into their shoes?  Who is going to willingly face what they face knowing the mayors, governors, and many state legislators will abandon them?  That many of the individuals arrested will be put right back on the street to rejoin the riots?

As stated in the beginning, there is one letter’s difference between DEFUND and DEFEND.  One letter, and that letter is U.

Think about it.  We all hate and resent what happened to George Floyd.  We all hate injustice and unfairness across the board.  We all want to live safe and free, to live our lives without having others kill us or our dreams as the result of something we oppose.

One last point.  Police are under intense scrutiny all the time.  Their actions are judged by many.  Internal Affairs.  Superior officers.  The mayor, the governor, watchdog groups, the people on the street.  More oversight isn’t the problem.  They’ve got tons of oversight.

Before you paint them all with the brush of one whose actions the rest of the officers deplore, remember this:

Who ran into the buildings while citizens ran away on 9/11.

Who manned the streets during Covid pandemic to keep streets and citizens and businesses protected.

Who answered when you called 911 because someone you love was in crisis, had a medical emergency.

Who talked you through an emergency procedure that saved the life of someone needing help when you didn’t know what to do.

One. Letter. Different.  One.

← Previous Link: Prev: Facing Your Deepest Fear Next Link: Next: Independence Day:Do We Know What or Why We're Celebrating? →

END_OF_DOCUMENT_TOKEN_TO_BE_REPLACED

END_OF_DOCUMENT_TOKEN_TO_BE_REPLACED
Manage Cookie Consent
To provide the best experiences, we use technologies like cookies to store and/or access device information. Consenting to these technologies will allow us to process data such as browsing behavior or unique IDs on this site. Not consenting or withdrawing consent, may adversely affect certain features and functions.
Manage options Manage services Manage vendors Read more about these purposes
View preferences
{title} {title} {title}