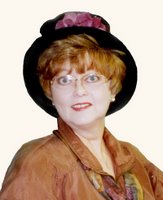 Warning: this is a no-edit zone…

Typically this time of year, we’re all off to a running start with New Year’s resolutions. We’ve laid out our plans and are now busy enacting them.

Whether you call your intentions for 2006 intentions or goals or plans or resolutions, the bottom line is they’re a map to what you want to accomplish in the coming year.

If you haven’t yet done this, don’t despair. There’s an in-depth article in the library on the www.vickihinze.com web site, “Why We Need a Plan” that can offer guidance on different aspects of writing you might want to consider for developing your plan, along with an example I use.

Most writers attempt to clear the decks to make getting into the writing as easy as possible–with the fewest life interruptions. That’s a good idea, IMHO; I do it myself. But two things nip at the heels of this action:

1. Within a few weeks, all the other incidentals stack up again and
2. Because the incidentals are cleared, we “think” we have more time than we actually do and we either:
A. Start an additional project or
B. Volunteer for something.

And then in a few weeks when the incidentals pile up again, we’re overwhelmed.

The point of the message is to be careful about taking on new things during the first few weeks of the New Year. Hold off until your desk clutters a little and you get a more realistic view of what this year’s “stable” is in your writing world.

I’ve been asked several times in the last week an efficient way to title books. For some writers, the title is something that can change easily. For others, like me, the title comes and it directs the thrust of the story. I write around the title. So it’s critical to have in mind a strong title that can carry the weight of a story.

For example. HER PERFECT LIFE, my April book. I imagined and gave a woman all she ever wanted–and then took every single bit of it away from her and forced her to rebuild a new life. In doing so, she discovers its perfection.

You can see that no other title would fit as well as this one. Why? Because the entire story spins around it. It is the story.

Whether you start with a kernel of an idea, character, situation, you translate it to the title and then build from there. You might change it several times during development, but each change will be targeted specifically to this story and these characters.

One suggestion is that before you settle in with a title, run it on bn.com and see if it’s been used. If it has, and its been a couple years, you can likely stick with it. If it’s been used lately, you might want to change it. Slight alterations work as well as synonyms. When you’ve got the right cadence, you’ll know it; trust your inner ear and your gut.

Titles are often changed, but if you weave the story around yours, and it is ingrained into the book, the odds are greater that you’ll keep it.

Remember, those of you who haven’t yet set out your plan (intentions/resolutions) for 2006, that it isn’t too late. Check out the article in the library, spent an hour with yourself and decide what you want to do. Drifting aimlessly is not a trustworthy mode of transportation on your career path.