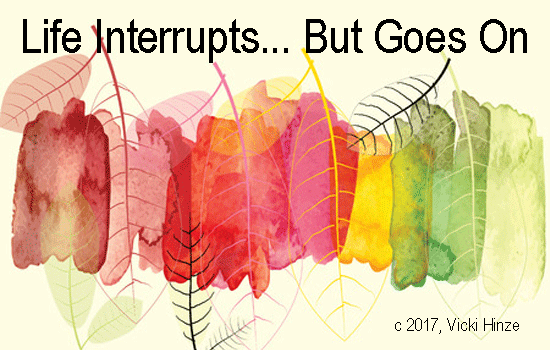 Life Interrupts… But Goes On

We all know that we experience Seasons. Times in our lives when things go smoothly, and times when they just don’t. I’ve been in a “just don’t” season since right before Thanksgiving. Hubby broke his foot and had to have surgery.

That meant he was sidelined for six weeks, and in the way wives are when husbands are down, so was I. It made for scaled back holidays and for challenging times working. And then Murphy’s law, unconvinced we had enough on our plates, kicked in. An update skewed my website. We’re into week five of trying to get it back to normal, and after some very large bills and anxious moments, I am hopeful that this week things will get back to normal on it. Been praying a lot on this. There are things on that site that can’t be redone or replaced.

But Murphy wasn’t yet done. On a Monday Hubby was told his foot had healed properly—there’d been some doubt and concerns that the surgery might need to be repeated. We rejoiced at that bit of good news… until Tuesday. One day later, with visions of things getting back to normal dancing in my head, I went in for a normal follow-up visit with the doctor and had unexpected surgery that same day.

That knocked me for a loop for two weeks. Two weeks in which I was scheduled to prepare for the release of a new book, Down and Dead in Dallas. It was supposed to come out the week that five police officers were shot, but I delayed the release out of respect for those officers and their families because that shooting incident occurred in Dallas.

The title of the book had been established in a previous book, Down and Dead in Even, so it couldn’t be changed, and while that is the only thing the two have in common, I just couldn’t release a book with that title on raw wounds. So I held off. Then all this.

While I agree there is never a good time for unexpected events that knock us off our feet, after all the months of work in writing a book and all the effort of publishing that book, it really causes disappointment and complications when life interrupts. Still, under the circumstances, the delay was the right thing to do.

So now I’m playing catch-up; it seems, on everything at once. I prayed about that, too, and accepted that I can do only what I can do, and then I put the challenges on the altar. I’m limited in what I can do. God isn’t. And this is one of those times when I have no choice but to accept my limitations and to trust Him, that He will get word to those who need it or want it or could benefit from it.

Admittedly, I’m hoping this specific season of trials is closing. I’ve had about all the “fun” I can take for now. At least, I think I have. Oh, I’ll deal with what I must, but I sure would be grateful if the season ends now. There’s no sugarcoating this. I am bone-weary tired.

The good news is, I’m not soul-weary tired. Like everyone else, I’ve had my share of those seasons, too, but I’ve been spared that this season, and for that I am really grateful.

If you’ve been reading the Down and Dead, Inc. series, you know it started with Down and Dead in Dixie. The second project is Down and Dead in Even. I wanted to mention that because when you subscribe to my newsletter, you get a copy of Even free. It’s a Quick-Read novella about Caroline Branch Easton, and if read before Down and Dead in Dallas, you’ll get more from the book. While that isn’t essential, getting to revisit some characters is always more fun when you know them. You meet Christine Branch in Even, and she so interested me, she just had to have her own story. That brings us to…

Down and Dead in Dallas, Christine’s story, which reveals a lot of the inside secrets of Sampson Park. I totally enjoyed that, and I hope readers will, too.

Down and Dead in Dallas is currently available in ebook (paperback is coming) at: Amazon, BN, iBooks and Kobo.

With grace, the door on this Season will soon close. And a window of progress will open. As I write that, I’m reminded of the truth that even the darkness night falls to joy in the morning.

May your dark nights be few, your mornings be many, and may you enjoy seasons of great progress!