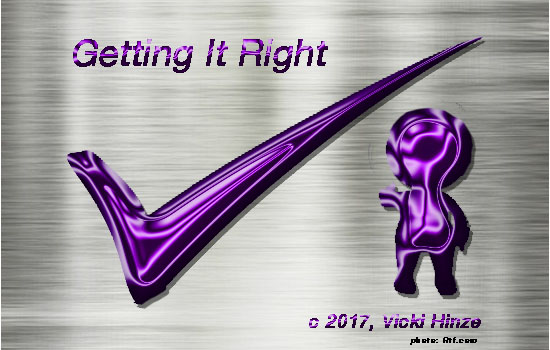 We’ve all heard a lot about Fake News lately, though it isn’t really anything new, and its claim to fame is not restricted to any group or entity. We see fake news published all over the place by all types of news media outlets. Even those sources we have deemed most reliable have slanted pieces not on opinion pages but on news pages.

There was a time when journalistic integrity precluded the publication of anything unverified or lacking credible sources. Between the twenty-four hour news cycle and the Internet, there surfaced a need for a high volume of content and for speed in delivering content.

Too often, mistakes are made. We accept that; we’re human. When they are made, retractions don’t always follow. Sometimes they do and are buried in back pages or small print, and sometimes the retraction is handled by an “update” to the original story.

None should deny the difficulty of the job. Yet an abundance of both retractions and updates undermine the credibility and the journalistic integrity of the publisher and the author. The initial publication is read by many, but far fewer will see or read the retraction or update. That creates challenges.

Particularly, challenges for many of the publication’s readers, who believe what they initially read to be fact. They miss the retraction or update and continue to believe the initial report is factual and accurate. Retractions might catch readers’ eyes, but far fewer readers will read an update, believing when they see the story, they’ve already read it. The natural inclination is to pass right over it. This, too, leaves the reader with the false impression of the original story being accurate.

Those challenges are not and never have been wholly avoidable for journalists. And in today’s media-savvy public are far more opportunities for flaws and inaccuracies to be revealed or exposed. This necessitates journalistic discipline and a dedication to get it right the first time. Credible sources later proven to lack credibility diminishes trust, destroys believability.

New information surfacing that alters the context and changes things completely creates a different dilemma. But it is a dilemma journalists and publishers have long since been aware exists. Their readers are aware it exists. When it happens, journalists dedicated to their profession ask themselves if they rushed the story or what they could have done differently to reveal the new information before releasing the story. In other words, they access their own actions and revamp their procedures accordingly.

Typically, after authoring or publishing an inaccurate story, a process revision is adopted. In the past, journalists and publishers tried hard to stick to facts that were from credible sources and verified. They sought to retain their credibility and to protect their reputations—personal and their media outlet’s—by seeking multiple sources and by verifying multiple sources.

With the advent of opinion being interjected into so many areas of journalism, it has become more and more difficult for readers to interpret whether what they are reading or viewing is opinion commentary or news. Many media sources blend the two to such an extent that it is difficult to differentiate. They slant their stories and programs, citing or interviewing—some say debating—experts who also slant their opinions. Questions are posed and structured to get desired responses. This too blurs the lines between commentary and fact, adding an additional layer of input for readers to sift through to make a reliable determination.

Lately, these blurred lines have been obliterated by media sources publishing stories and airing “news” segments that they blatantly state are “unsubstantiated” and “unverified.”

While many might speculate on the rationale for publishing a salacious story that is unsubstantiated and unverified, only the story’s publisher and author know for fact. Yet damage was done—to the subjects of the story, to its author, to the publishers, to the anchors.

In this recent occurrence, within hours of publication, it was revealed that the salacious story had been in possession of the author and publisher for many months. So speed to release the story wasn’t a factor. Volume of content needed clearly wasn’t a factor either, so their reasoning for damaging the subject’s reputation and their own remains a mystery. It is also noteworthy that many other journalists and publishers had this story and elected not to publish it because its claims were not verifiable or substantiated. The story lacked credibility—on multiple fronts.

In the post-publication revelations, evidence was produced and released by third parties that the entire story was false and inaccurate. One named subject was not even the right person. For hours, readers and those who believed the publisher and media outlet were accurate scourged and condemned (and thus, falsely accused) the principal subjects involved. Those subjects declared decisively that the story was bogus and wholly inaccurate. Third parties produced verification and evidence that claims of travel to a purported location were manufactured and false, and witnesses from the individual’s actual whereabouts during the stated time of the event corroborated that the report itself, upon which the story had been based, was not authentic, not an official report.

The original report contained no redactions. Soon after the evidence proving the falsehoods, a single sentence, or portion thereof, was redacted. A cable news channel picked up the story and didn’t verify it. It did air it, and really went out on a long limb, giving it a lot of coverage and air time.

In its footsteps, other media outlets and reporters followed. Clearly, they were not yet aware of the evidence proving this story was fake news. Several government officials were taken in as well. And about twenty-four hours later, an entity phoned one of the subjects to apologize. Both were damaged, and that’s the bottom line. Others were impacted and damaged because those sharing this story didn’t get it right.

The point is, while this is an irritant for the subject(s) in the report, it is a nightmare for the publishers and reporters or anchors in all mediums who put the story into the public. Trust is broken. Credibility is shot. And doubt interjected by them flows over into all other media outlets. Seeds of distrust have been sown.

While these negative results might be able to be repaired, in future, readers and viewers will be slower to trust these people and entities again. Once trust is broken, even when repaired, a crack remains, and doubt seeps in through that crack which requires others to take all that is said and asserted with a grain of salt. Readers and viewers might forgive but they don’t dare forget that these “reliable sources” for news have been wrong before and they could be again. Nor will readers forget that they passed along what they thought had been the facts only they weren’t. They were embarrassed for believing… and they are not eager to endure that again.

Journalists and media publications form a bond with their readers and viewers. It is a bond seated in trust on both sides, and understanding that makes publishing a story that is unsubstantiated and unverified unacceptable.

These entities learned, or will learn, a hard lesson with this event. Whether libel and slander suits will result, who knows. But imagine yourself being accused of salacious behavior you didn’t commit. Would you vigorously defend yourself to the full extent the law permits?

Only you can answer that, but it’s a tough spot to be in, and it carries added, and I daresay, regrettable consequences. The damage to credibility and reputations is enormous and long-lasting.

As writers, whether of fiction or nonfiction, we understand that bond between author and reader. The consequences of violating it and breaking that trust. But from this recent event, we have the opportunity to see more clearly the impact and results of those violations and breaches.

There are those initial-story readers who do not yet—and may never—know the truth. They are still discussing this report, this article, as fact and still sharing their findings with others. The challenge broadens, and the casualty is the truth. The victims are the subjects. The irritations and interruptions to their lives. The impact, intended and unintended, on them is significant, and that impact continues to ripple.

The same thing occurs in fiction. A reader reads and finds inaccuracies in setting or inconsistent characterizations—details that are just plain wrong—and recognized as false, it has a negative impact that is shared in the form of reviews and commentary. Negative consequences to the author, the book, the publisher result.

As writers, we need to be aware of this, and do take a lesson from fake news. What lesson exactly?

Verify sources. Test credibility. Take the time and make the effort to get what you write right. And if you can’t verify or substantiate, don’t publish. In novels or fictional stories, even if you are creating a world, that world must be credible, logical—believable.

Believable credibility is as imperative in fiction as journalistic integrity is to nonfiction.

© 2017, Vicki Hinze. Vicki Hinze is the award-winning bestselling author of over thirty novels in a variety of genres including, suspense, mystery, thriller, and romantic or faith-affirming thrillers. Her latest release is The Marked Star. She holds a MFA in Creative Writing and a Ph.D. in Philosophy, Theocentric Business and Ethics. Hinze’s website: www.vickihinze.com. Facebook. Books. Twitter. Contact. KNOW IT FIRST! Subscribe to Vicki’s Monthly Newsletter!

← Previous Link: Prev: Creating the Life You Want Next Link: Next: Life Interrupts...But Goes On →