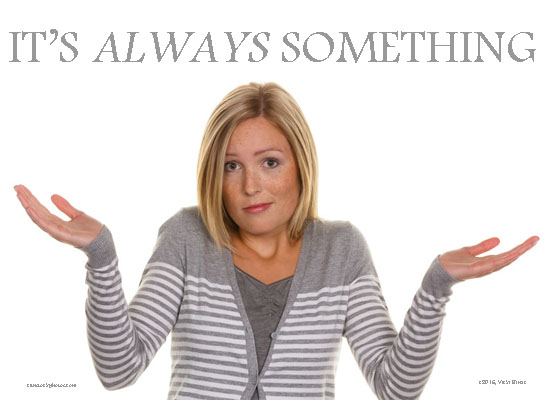 Well over a month ago, I visited a blog. A popup window informed me that a virus was attached to the article and my computer refused to go there.  Thank goodness for protection!

A few minutes later, I shut-down my computer.  It wouldn’t reboot.  To keep this short, the hard drive failed. I had done a lot of work that day so didn’t have backup copies of it, but everything else was backed up so, at most, I’d lose a day’s work.  Three articles, two chapters in a book, and a number of graphics as well as two new series ideas, I’d done the preliminary testing and workup on to see if I wanted to pursue them.

That’s a lot to lose.

It took days but the data was successfully retrieved. The computer, however, was damaged in the rounds.  I’d bought a new one and got back to work, restoring from the external hard drive and recovered data.  All was well, except for the destroyed computer.  It took a month to resolve that issue, but that worked out okay, too.  I ended up with two new computers. Some would say that was the best possible outcome. I know I love that store and will shop there forever because they did the right thing.

Now, I thought, all this computer stuff is done. Now, I can get back to writing.

Not so fast.  Some person or groups thought it was a perfect time to slam one of my websites with hack attempts.  As many as 100+ in a day. I’m notified of every attempt, which means my email was clogged to the nines also.  This continued for a week.  Then, it stopped.

Good, I thought. That’s over. Everything held and no damage was done.  Now, I can get lost in my writing.

Not so fast.  The router decided it wasn’t happy and it gave me fits.  I get a new one and install it and think, okay, that’s that.  Now, I can write.

Uh, not exactly.  I kept getting kicked offline.  Over and over.  This whole ordeal, I told myself, is a patience test. I can deal with it. Really, I can.  So it’s not the computer, or the router, this problem has to be the modem.  So I take the modem to my provider and get a new one.  I’d had it four years and, I learned, the life expectancy is about 2 years, working it as hard as I do.

I get home and install the new modem.  I was almost giddy.  This is it. The last thing.  I mean, what’s left to possibly go wrong?  Nothing.  Writing is coming soon, I tell myself…

I was wrong.  The new modem works great.  The router and computer works great. My printer, however, which had worked great, now won’t work at all.  In fact, it’s disappeared—virtually.  Physically, it’s still right here.  So I fritz around with it, and finally get it to work by hardwiring it. That doesn’t resolve the problem but it did enable me to use it to fax an important document. Then the printer fizzled out on me again.

No phone for support online, but my internet provider was gracious and helped and we did get the printer working again.  It just wouldn’t do its wireless thing.

At this point, I’d been frustrated and yet helped by kind people with multiple issues for over ten hours. I realized I’d had enough.  I placed my hands flat on my desk, and aloud said, “That’s it for me. It’s ALL on the altar.”

I logged out of my computer, shut off the lights and left the office.  That’s the first time I’ve not checked email before closing shop for the night in so many years, I can’t remember it.

The lesson is, you persist, but when you’re saturated, sometimes you need to know when it’s time to back off and be still a bit. I was there, and did it.

So this morning, I come into the office knowing the challenge awaited me. Yet I wasn’t wired for sound.  Actually, when I put it on the altar, I really did. Didn’t give it another thought last night or this morning until I hit the office door.

I crank up the computer and the printer didn’t fix itself (shoot!) so I had to try again. I shut it down. Unplugged it.  Rebooted it.  Still no luck.  So I got this idea that I should maybe check the setup again—not via the computer but directly on the printer.  I did and ran its test reports and everything looked good.  But the computer still wouldn’t talk to the printer.  Mmm….

I shut everything down. Unplugged it all and then powered up again.  I checked the printers on the computer and finally found the issue!

Finally, the printer is working again—and talking to the other devices and the testing shows all is well on the home front.

And I’m little wiser for the wear.

This morning, the challenge didn’t begin to test my patience. I guess I left the impatience at six weeks of computer issues on the altar, too.  My attitude changed. It’s always something and it works out—eventually.

The one thing after all these weeks of computer turmoil I do wish I’d done is to put it on the altar sooner.  First and not last resort. But I guess I needed to go through it for the lesson to stick. So that worked out for the best, too.

Now, there’s a new computer, new router, new modem, and working printer. All with new cords and freshly checked updates and, well, the whole nine yards.  But I’ve learned my lesson.  I am not going to say maybe now I can write.

If the world falls apart now, I’m sure someone will fill me in after my pages are done.

Because the truth is, at no time are conditions perfect for any of us on anything.  It’s always something…

Vicki Hinze is the award-winning bestselling author of nearly thirty novels in a variety of genres including, suspense, mystery, thriller, and romantic or faith-affirming thrillers. Her latest releases are: The Marked Star and In Case of Emergency: What You Need to Know When I Can’t Tell You (nonfiction). She holds a MFA in Creative Writing and a Ph.D. in Philosophy, Theocentric Business and Ethics. Hinze’s website: www.vickihinze.com. Facebook. Books. Twitter. Contact.         KNOW IT FIRST! Subscribe to Vicki’s Monthly Newsletter!

← Previous Link: Prev: Quick Tip on Discipline Next Link: Next: America's National Calendar for May 11 →