There’s been a lot of reeling going on in everyone’s life since early November–and, honestly, since long before then.  Many expected that the reeling would cease and it hasn’t, and that often sends the reeling into hopelessness and despair.

In the past month, I’ve talked to more people despairing than I remember speaking with in my whole life.  It’s been hard to help because I’ve been reeling, too.  So I’ve prayed on it and put it on the altar.

I was beginning to think that either those prayers weren’t going to be answered or for some reason the time for answers hadn’t yet come.  Boy, was I wrong–on both fronts!

We all know that seemingly unrelated incidents aren’t unrelated at all.  The connections are there.  We just haven’t yet seen them.  We also know that our awareness of those connections can come from anywhere, any direction, at any time or place.

Such was the case for me while dropping into Walmart yesterday to pick up a “by request” goodie for one of my angels.

Cruising down one of the semi-main aisles, a red T-Shirt caught my eye.  I don’t typically go for bright reds.  I favor the blue-reds.  So this oddity–that this bright red shirt caught my eye–really snagged my attention.  I stopped to look at it.  Here’s a photo I snapped of it: 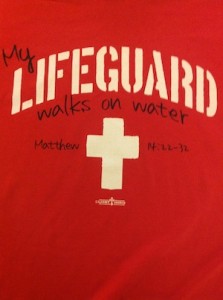 Body slam!  Mind grounded.  My life’s guard does walk on water.  Even when I can’t figure things out, He can.

And then I saw, T-Shirt number Two: 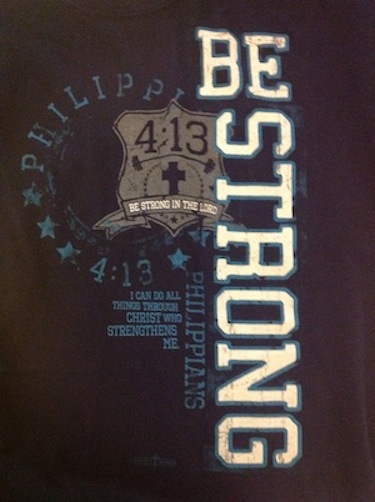 And then I saw the third t-shirt: 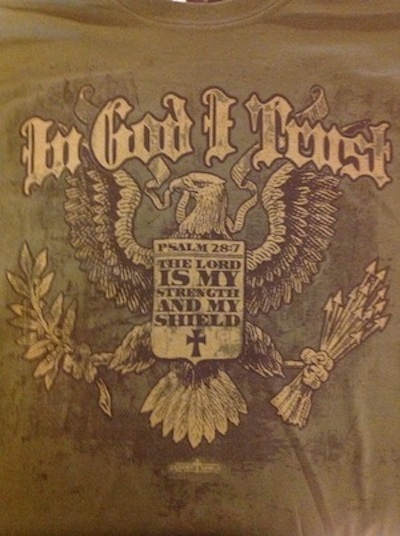 In God We Trust.  That’s where strength resides–and our shield (life’s guard), too.

And there it was.  The answers I sought for myself and to share were right there before me, in three Life Source™ T-Shirts hanging innocuously on an aisle rack in Walmart.

And (because someone’s going to ask) did I buy the shirts?

You bet I did.  All three of them.

Call it cheap therapy, or supporting the vehicle for answered prayers.  Call it whatever you like.  I call it God Speak.  Because He did.  He spoke to my weary mind, body and spirit, and He grounded me, reminding me of all we tend to forget when we get too wrapped up in this blink we call life.

And because He spoke, my heart is at ease and I hope that in sharing this now yours is, too.

← Previous Link: Prev: Wishing You and Yours the Happiest of Thanksgivings Next Link: Next: Moments of Grace: It's All Fodder! →