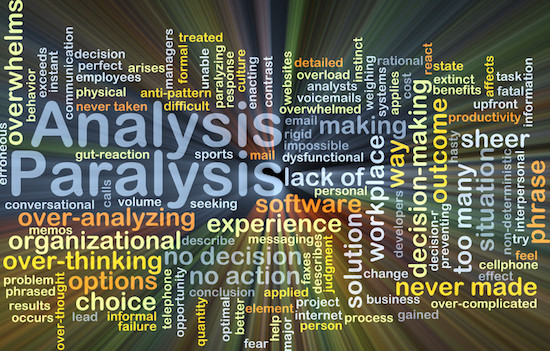 A great tool for those in business who want to stay in business is analysis, particularly of new projects. The objective is to minimize risks. To mitigate high risks. Yet some take “high risks” to mean any risk, which guarantees they’ll never achieve all they could have because they won’t get out of their comfort zone.

Your best always resides outside your comfort zone.

Let me share an example. In the early 1990s, I got a great idea for a new series of books. Two things made the series a little unusual: One, there was a paranormal element (which hadn’t yet come into its own) and two, the series would be an author-generated, open-ended continuity series of single title novels.

I pitched the project to my agent, who… well, let’s be kind and say she hyperventilated. When she was breathing almost semi-normally again, she told me that if editors wanted an open-ended series of single-title continuity books, they’d create one and then hire the authors to write them. Authors didn’t generate open-ended series.

Needless to say, she didn’t represent it. I told her that was fine—you never want someone representing something they aren’t crazy about—and handled it myself. My thinking was if I were an editor and some author handed me a fully developed series concept, I’d be interested. All the work done for me?   You bet I’d be interested. She thought that was a mistake but couldn’t stop me, so she tolerated me shopping the series.

I contacted five editors at five major publishers. Four were interested. I flew to New York and met with each of them.

One wanted to incorporate the series into an imprint that was restrictive. Nixed that one.

One made an offer on the spot, and it was a good offer, but something held me back. I couldn’t say what, but I knew to keep the options open.

The third was a bust. Her vision for the series and mine were poles apart and never the two would meet much less mesh.

The fourth editor was excited. She literally bounced in her seat and her eyes had this wonderful twinkle. Her enthusiasm matched my own. She too made an offer, and while it was for less money per book than the first offer, I knew she was the right editor for the project.

I called my agent and fired her, then hired a new agent to handle the contract. An agent and agency that was willing to tiptoe outside the lines and take risks that were analyzed and deemed worth taking. (I like to blaze trails. That latitude is a “must-have” in an agent/agency for me.)

The series was successful and came oh-so-close to being made into a television series. (Yes, another near-miss.) The books are still selling today.

Now, in fairness, let me say that there are times when we all suffer from analysis paralysis. None of us are eager to embrace high risks and we all want to minimize risks and maximize success. But here’s the thing. The two are not mutually exclusive. Embracing one and shunning the other doesn’t guarantee you won’t fall flat on your face and splat!

You can do all the analysis in the world and still be wrong. Something happens that’s unforeseen or out of your control—like market reaction, reader reaction, a shipping catastrophe—and that one incident changes everything. So you analyze, yes. But if playing it safe becomes the sole focus, you’ll never truly enjoy success or hit your personal best. You’ve encumbered yourself with self-inflicted limitations that prevent your best from leaving the bench, much less getting into the game. Oh, you might get down from the nose-bleed section of the bleachers, but forget getting on the field and playing. It can’t happen because you won’t let it.

Remember, too, that analysis is a necessary step in a process. The process encompasses more. All. Thinking about something doesn’t actually do anything. Doing requires action.

I could have shelved the continuity series at multiple points along the way. Talked myself out of sending to my agent. When the agent expressed, er, reservations, I could have said, “Forget it. It’s too risky.” I could have let fear and doubt gnaw at my faith in the project, and not contacted the editors on my own. Few authors submitted without an agent then, and doing so was viewed as a little less than wise. I could have not gone to New York and not met with the editors, or I could have opted for the publisher offering the most money, the best marketing plan. I could also have ignored that instinct saying to hold off accepting that first offer, or ignored the twinkle in the eye and enthusiasm of the second editor.

There were multiple analysis points when paralysis could have set in, and any or all of them could have rationally and logically been justified. Only one thing stopped me. One.

I believed in the project. The risks were ones I understood and was willing to take. Worst case, I figured, it wouldn’t sell and I’d look like a fool. For this project, I was willing to look foolish.

And I guess that is the deciding factor.

Do your due diligence, yes. Analyze. But don’t let analysis become paralysis. Don’t not take risks out of fear. Take risks that are worth taking for reasons you deem worthy.

Incidentally, that original agent has long since been out of business. And I’m still writing. And what of the editor with the dancing twinkle in her eye? She’s still in the business, too. Promoted many times since then, which is absolutely no surprise.

Vicki Hinze is the award-winning bestselling author of nearly thirty novels in a variety of genres including, suspense, mystery, thriller, and romantic or faith-affirming thrillers. Her latest releases are: The Marked Star and In Case of Emergency: What You Need to Know When I Can’t Tell You (nonfiction). She holds a MFA in Creative Writing and a Ph.D. in Philosophy, Theocentric Business and Ethics. Hinze’s website: www.vickihinze.com. Facebook. Books. Twitter. Contact. KNOW IT FIRST! Subscribe to Vicki’s Monthly Newsletter! Your best always resides outside your comfort zone.

← Previous Link: Prev: Chance and the Extraordinary Life Next Link: Next: Writers and Faith--Part 1 →