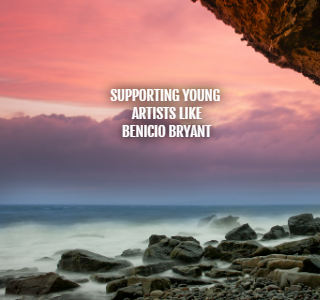 For some time, I’ve worried about young teens and the impact on them of lyrics and music.  This concern goes back to the early days of my own kids being young teens and lyrics that sent destructive messages.  I worried that putting those songs into their heads would seat and influence them in their lives.  And when I realized that songs I listened to as a teen and haven’t heard for years, when replayed, I recalled the lyrics explicitly, I knew my concern was justified.

A while back, I was surfing on YouTube and ran into a young singer named Benicio Bryant.  He sang You are the Reason and had a wonderful voice that was far more mature than his age.  He was thirteen at the time and yet his voice was infused with deep emotion and sparked relevant thoughts.

I went in search of more and discovered he was competing on America’s Got Talent.  In his audition, he sang The Joke.  If you’ve been bullied, or you’ve ever experienced someone putting you down to make themselves feel better and you’ve struggled to rise above it, this is one you won’t want to miss.

Advancing in the competition, he performed original songs.  Ones he had written.  And they are good.  Really good. In Here Goes Nothing he explores having a dream and fearing you’re not good enough but going for the dream anyway. Can you relate?  Of course, you can.  Everyone has had to face or fall to that fear; it’s universal.  We understand those risks, those fears and doubts, and we know there’s only one constructive way through them—to take the risks.  Simon Cowell advised Benicio to listen only to and trust himself, and he advanced again.  This time, with positive comments from several judges that this was a hit song.

And so he did advance.  With Who I Am.  Have you ever known someone who struggled, made it, and then forgot where they came from or lost their way?  This song is all about that, and a plea to be honest and for help to not let this happen. It’s great.  Just great.  Such a positive message and a heartfelt plea to keep your head on straight about priorities and what really matters.

Benicio then sang Fall Apart, a soul-searing song about feeling a loss of faith in you or in what you’re doing by someone who matters.  About seeking and the struggle and feeling that loss of support: an experience anyone in creative pursuit (and likely any other) has no doubt encountered many times.  There is always someone whose support you had and wanted to keep, who moved on to the next shiny thing.

The whole point is this:

He boldly confronts insecurities and welcomes listeners to peer into his heart and soul, awakening in us the certainty that we are not alone in our own fears and doubts.

There isn’t an author who doesn’t experience those fears of not being good enough.  Not a writer who doesn’t have to overcome hiding the scars and pour it all out on the page.  Not a writer who gets close to reaching the dream and must face the truth that underneath it all, they’re terrified of crashing and falling.  Yet, they write anyway.  But, man, do they relate.

I started this article as a message to writers. But the truth is, these insecurities apply to everyone.  In any stage of life or their careers.  The demons wanting to hold us back, to talk us out of reaching for the stars, are merciless.  And there is but one way to vanquish them:  to confront them and push forward, to stretch and reach in spite of the fear.

That is what Benicio does in his music.  And it is exactly what millions of us need to affirm our own journeys.  And that is why we should all support him.

A NOTE TO BENICIO

If you should see this…  You have an amazing gift.  Your life’s purpose is clear.  Keep your internal compass intact and your head on straight because the world needs a lot of what you have to give.  And know, writer to writer, human being to human being, I and many others are wishing for your every success—for you, and also for all those you have and will touch through your music.  It’s a big responsibility—not for the faint of heart—and there will be many ups and downs. Yet, I am wholly confident that you’re up to the task.  Stay fearless and be blessed!

← Previous Link: Prev: We Remember Next Link: Next: Life Makeover →