The Storm is Coming… 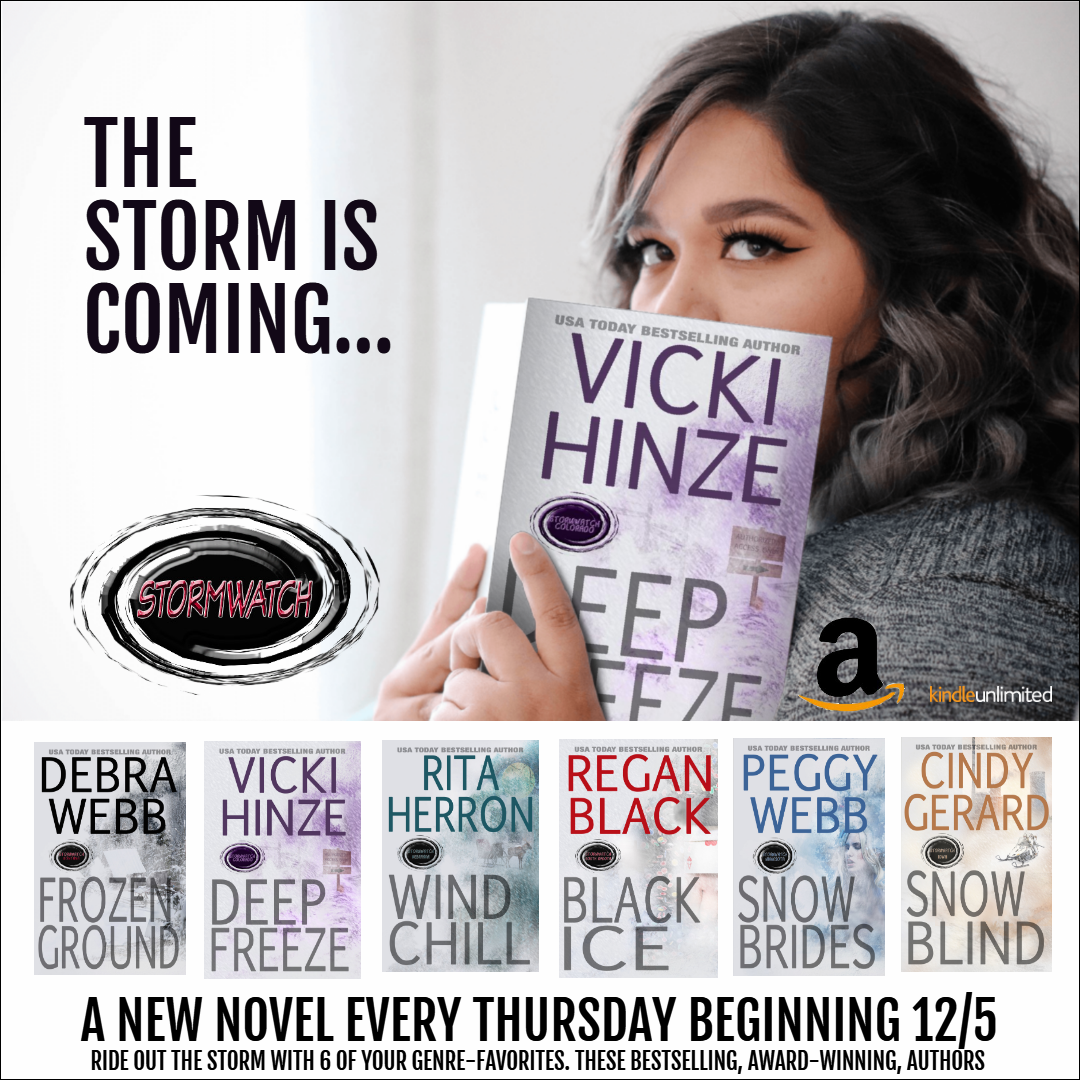 Every year, a group of authors get together and create a series of related books.  Debra Webb and I basically lay out the series and, when we’ve got a good grip on it, we bring in the other authors.  Each author then writes a book for the series and the rest is history!

All of the books are suspenseful, some are romantic suspense, some are more mystery.  The new series about to be released is STORMWATCH.  In it, readers track Holly, the worst winter storm in eighty years, from Montana to Colorado, to Nebraska, to South Dakota, to Minnesota, and to Iowa.  Every Thursday, beginning December 5th, Readers dip into a state and experience the storm and its impact there on specific people in specific situations.

In every novel, readers discover, in a storm, the weather isn’t the only threat!

December 5th, with Debra Webb’s FROZEN GROUND, we engage in the life of Abbey Gray, who returns to Montana and Sheriff Garrett Gilmore, a man who has been in love with her since they were kids.  When Abbey’s neighbor is murdered, Abbey must find the truth about her painful past to avoid becoming the killer’s next victim!

December 12th, with Vicki Hinze’s DEEP FREEZE, we connect with Emma Miller, a probationary security consultant posing as a reporter and assigned to protect a top-secret High Containment Lab located underneath an International Airport in Colorado that houses the deadliest bio-contaminate diseases on the planet. A lab under attack by terrorists who want to black-market those pathogens. Dr. Gregory Mason Martin, a bio-containment specialist, runs the lab. He and Emma grew up together and she’s always fascinated him, but she has a long-standing habit of going through men like water, so Mason’s kept his distance. He doesn’t dare to trust her or her abilities. Now, they must protect the lab and stop the terrorists from obtaining the pathogens. And protect the pathogens from the deadly storm. If those pathogens are stolen, the world will be held hostage, and worse, if set loose, the country could be facing the worst pandemic in history. A pandemic that could wipe out the entire nation.

December 19th, in Rita Herron’s WIND CHILL, we join Special Agent Gia Franklin, who has been tracking The Christmas Killer, a cold-hearted monster who murders and leaves one of the Twelve Days of Christmas ornaments with the victims. Gia must stop him before he kills again. And then he kidnaps her sister, making the case personal. Fearing this is a trap, Gia teams up with Sheriff Murphy Malone to save her sister and spare the town.  The Christmas Killer has plans of his own—ornaments eleven and twelve for Gia and her sister…

December 26th, in Regan Black’s BLACK ICE, we follow the storm to Deadwood, South Dakota, to a casino packed with stranded people where Evelyn Cotton deals cards to keep her adventuring business in the black during the off-season. Wyatt Jameson, a man from her past who’d left her for the Army without so much as a goodbye appears.  Recruited by the FBI, and unbeknownst to Evelyn, Wyatt’s undercover with a group planning to steal the famous Mae West Solitaire on display at the casino.  The storm changes the would-be thieves’ timeline and Evie gets caught in the crossfire and Wyatt’s carefully laid plans are shattered. She’s angry and bitter, believes he’s a crook, and he must win her over—fast. Without her adventuring expertise, they might not survive long enough to tell her she’s the woman he’s never stopped loving.

January 2nd, in Peggy Webb’s SNOW BRIDES, the storm hits Minnesota, and turns Maggie Carter’s turbulent life—her marriage to Joe is on the rocks—into every parent’s worst nightmare. Their daughter Kate is driving home from college, perhaps the last holiday they will ever spend together as a family, and Kate vanishes. Even worse, she’s the third college girl to disappear near the frozen Superior Hiking Trail within the last two years. Is Kate trapped by brutal nature or is she in the hands of a monster? Maggie, a Search & Rescue handler, and Joe are galvanized into action. Can they find their daughter—and their way back to each other—before it’s too late?

January 9th, in Cindy Gerard’s SNOW BLIND, the storm twists into Iowa, paralyzing everything in its path—and escalating the simple recon mission of Rapid Response Alliance operatives, Cara Graves and Josh Haskins to an imminent threat.  Cara and Josh have 48 hours to circumvent a well-planned nuclear disaster. Fighting the clock and the worst blizzard in nearly a century, Cara and Josh risk everything – their lives and their hearts—to stop the terrorists determined to create Armageddon.

Here’s a short video on STORMWATCH!

All six of the novels will be available in digital and paperback.  You can find them HERE.

I hope you enjoy this new series as much as we have enjoyed putting it together for you!

← Previous Link: Prev: The True Meaning of  Thanksgiving Next Link: Next: The Storm Roars Into Montana in Debra Webb's Frozen Ground →