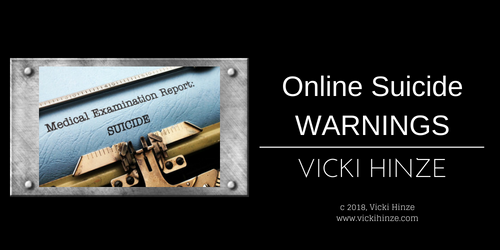 Online last night, a public figure was in crisis. Feeling she had failed in her mission, she sank into depression and began speaking of suicide. Some spoke out in support of her, and some actually encouraged her to kill herself.

This raises a couple of questions that parents, in particular, should be addressing. First, the fear of failure.

We all try and fail. It’s part of growing up. It’s also part of being an adult. The challenge isn’t in failing, it’s in how we view failure. Parents can teach their kids a lot of responses, but none will teach more than watching a parent attempt and fail and witnessing how the parent responds to it. Kids truly do learn what they live.

We all need coping skills on dealing with disappointment and failure because at some time we are all going to be disappointed and to fail at something. That makes it imperative to learn that failure isn’t fatal—nor should it be.

My father used to say that failure is proof of an attempt that was out of your reach. You tried. You stepped out of what was known, comfortable and easy, and made an effort to stretch further. That’s a good thing. When you take the risk and make the attempt you are growing. Every attempt brings experience. Insight. And from those two things, you gain wisdom.

If you aren’t failing, then you’re standing still. Sticking with the easy or the known. You aren’t growing. That means you’ll never reach your potential. You’ll never even know what it is, because you choose not to test it.

Now, let’s leave emotion behind for a second and look at failure from a logical standpoint. If you try something new, hard, and different. You’re stretching. Growing. You might not succeed at your goal, but you gain something. Experience, insight, wisdom. So if you gain something, have you failed? Really?

So teach your children that failing is part of the process. No one who has achieved a great goal did so on his or her first attempt. S/he failed many times on the way to becoming what some describe as an “overnight” success.

I’m fond of quotes. One I love is all it takes to win in life is to get up one time more than you get knocked down. No idea who first came up with that, but I’ve told it to myself for years. We need to teach our kids the value in it. Just keep getting up. Get up once more than you fall, and you win. So long as you get up, the quest isn’t over.

Another critically valuable lesson is in learning there is no shame in failure. We all like to win. Of course, we love to win. But the truth is, most winners have failed their way to it. They’ve taken risks. They’ve made mistakes. They’ve started over and over and over. Tried again. Rarely does anyone win something worthy of being won without experiencing his or her fair share of failures—or more than his or her fair share of failures. Failing goes with the territory. It’s part of the winning package.

That, strange as it may sound, is a blessing for two reasons. The attempts refine our attempt and confirm our dedication to it. Define the importance of what we’re attempting to us and to others. And that we make them teaches us the lows and the highs. We better understand the value of the win because we have trudged through the sludge of the loss. There is much value in that journey.

Not only do we grasp what winning gives us, we understand what it demands from us. The sacrifices and efforts. Because we genuinely understand what we’ve experienced, we have a much deeper appreciation for the journey’s of others and for what we’ve won—and how we’ve won it.

How we win is every bit as important as what we win. Oh, you’ll hear people say, “By any means necessary.” But foul is foul, and with time, the penalties for foul become steeper and steeper. Stick to fair means. Fair will remain fair, and carries no stench or slime that clings to the conscience, the heart or the soul.

Failure isn’t a bad thing. That is the point. It can actually be a wonderful thing because it might not open the door to your goal, but it will open a door, or several doors that lead to the door that opens your goal. Rarely is attaining a worthy goal a single step process. Far more often it’s a series of steps. All we must do is make them, eyes and ears open, learning as we go.

When we don’t teach our children to cope constructively with failure, or make them aware that failure holds value, we do not serve our children well. They need to know how to win and lose. To try and succeed and to try and fail. They need to know that their reactions to both define them, their character, and that there is value to them in their reactions. Not just value in this specific response, but in the wisdom that can be applied to every undertaking in their future for the rest of their lives. These are tools. Give them the tools.

They also lack the insight that at some point in time they will be broken and fragile, and when they are, others will respond to them. I hope that they receive better than they gave this woman.

To those “just do it” people: your parents failed you. They did not instill compassion or an understanding that no one escapes from feeling hopeless or helpless sometimes. And when someone reaches out with talk of suicide, what they are really saying is, “Help me.”

Let last night be a learning lesson for you. You’re no longer a child, and you are responsible for teaching yourself what your parents or caregiver failed to teach you. And that is that the world doesn’t revolve around entertaining you. All humans stumble and fall, and whether they want to or not, rely on others to lift them up. If they did not, they wouldn’t go into a public forum and cry out for help.

There is no shame in asking for help. There is shame in mocking someone who does. It’s time for you to look deep inside and to decide what kind of person you want to be. Do you want to be a mocker? Truly? Because if that is your choice, you will stay a mocker, but if you do, know that you will one day cry for help. You will seek it and you will feel the pain of being mocked. It is a fact that what we do to others comes back to us tenfold in this lifetime. Why does this happen?

Because that which we mock we must learn to understand. Compassion, nurturing and humanity are not just words. Dignity and grace are not just words. They are a way of looking at life, at ourselves, and at others. It is those things that cause people to lay down their lives for others. To feed someone hungry and skip a meal. To take cups of hot coffee to homeless on a cold night when they stand around a burning trash drum seeking warmth for their numb toes and fingers.

Some will say I’ve had a hard life and I take care of my troubles myself. I never ask anyone for anything. Let them fix their troubles like I fixed mine. To those, I say, you’ve been blessed. Gifted with what you need to be able to take care of your troubles. You’ve gained from your hard times and that education has helped you make your way. Built your strength. But different people have different experiences and different strengths.

And here’s the part you’ve been missing or you wouldn’t be a mocker: Every individual with his or her own journey and gifts brings something of value to the table. Perhaps something you lack. You need. Something that would be of benefit to you.

You had an opportunity last night to be compassionate. To look deep within and outwardly express your humanity. If you mocked, you failed.

But don’t be disheartened. Failure isn’t fatal. The wisdom and insight you gain can foster growth. Your growth will aid you in tapping into your humanity. I hope you do. I pray you do—for your own sake, but also for the sake of those who rely on you.

The public figure from last night survived and saw dawn. For that we should all be grateful.

And to her mockers, this morning, I ask this question:

How would you feel at this moment if she had not?

← Previous Link: Prev: Between the Rock and the Hard Place Next Link: Next: Times of Trouble →

END_OF_DOCUMENT_TOKEN_TO_BE_REPLACED

END_OF_DOCUMENT_TOKEN_TO_BE_REPLACED
Manage Cookie Consent
To provide the best experiences, we use technologies like cookies to store and/or access device information. Consenting to these technologies will allow us to process data such as browsing behavior or unique IDs on this site. Not consenting or withdrawing consent, may adversely affect certain features and functions.
Manage options Manage services Manage vendors Read more about these purposes
View preferences
{title} {title} {title}