Hitting the Wall: When You Can’t Take One More Disappointment 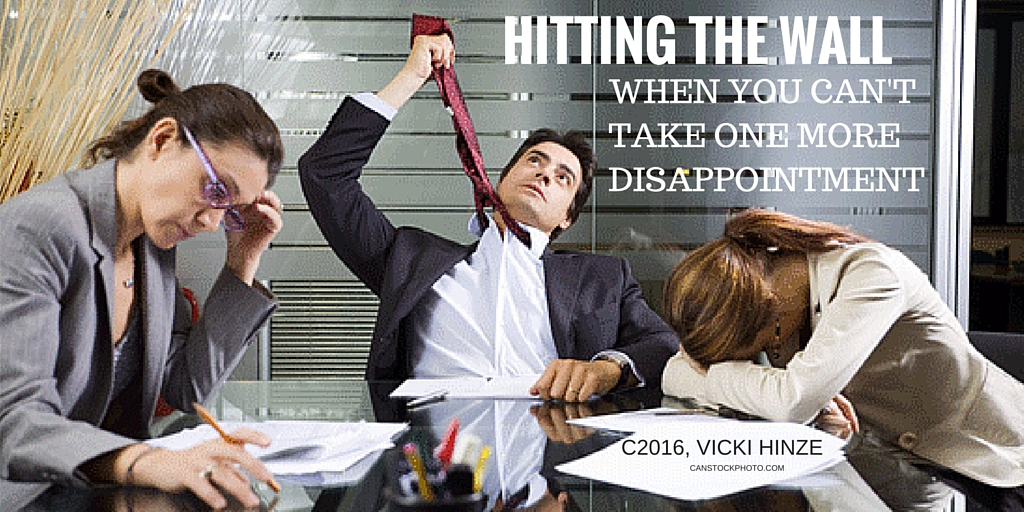 When You Can’t Take One More Disappointment

Sooner or later—and, unfortunately, all too often—we hit the wall where we suffer disappointment and think we just can’t get through it one more time. We’ve been there before, regularly, and over and over we’ve picked ourselves up and pressed on. Now, we feel depleted. Hollow. Empty. And we wonder, what do we have left we can use to pick ourselves up?

We also wonder, Why me? You try hard to be a good person, to help others, to do all you need to do to achieve what you’re striving to achieve, and yet, here it is again—the wall. Disappointment. Why?

But truth dawns and we’re forced to accept that exploding, stewing or simmering doesn’t fix anything. It doesn’t ease the other upsets or fill us up, though it can add more troubles to our heap. It doesn’t answer any questions. And it certainly doesn’t do anything to tear down that wall.

Sooner or later, we recognize this simmering isn’t doing anything except keeping us miserable and caught in despair, and let’s face it, that’s a sucky place to be. We don’t like it, we don’t want it, and we surely don’t need it. What we need are answers. We need to find out how to knock down the wall. And we need to know how to handle disappointments so that they don’t chew us up and spit us out.

We need those answers because we’re smart enough to know that as long as we’re striving for something, for anything, we’re going to hit walls and we’re going to suffer disappointments. It goes with the striving territory. So since we can’t wish walls and disappointment away, we have to figure out how to endure them without them beating us half to death.

That’s recognition of the problem and that brings us halfway to the solution. Why? Because no one ever solved any problem until they recognized it as a problem. We did that. That’s progress. And now we can shift our focus to solutions.

A couple questions come to mind immediately. Why did we hit the wall? Was it a lack of preparation or planning or something left undone that could have better prepared us to face the wall? If so, our solution’s easy. Do what wasn’t done—and do it well. Then the wall dissolves.

But what if we were prepared, we had planned and had done all we could do? What then? Then we look at the outcome and ask if there’s anything we could have done differently to avoid smacking into the wall. If so, we have our solution. If not, and the result was simply out of our control and nothing we did or didn’t do, nothing we could have altered and done differently would have changed a thing, then there is solace for us in knowing it.

Oh, we’re still disappointed that what we hoped to achieve was sidelined and our success thwarted but, you know, there are two ways to look at that, too, and they both deserve respect.

Haven’t you ever wished for something and worked terribly hard for it only to later realize that not getting your wish or what you wanted was a lucky break? A blessing? Because if you had gotten that wish or want, you wouldn’t have pursued what you did pursue and what you did do worked out a hundred times better? More important to you? A blessing in disguise?

Garth Brooks sang a song once, “Thank God for Unanswered Prayers.” Haven’t we all experienced those kinds of events? At the time they occurred, we might have been disappointed or even devastated, but with the clarity of hindsight, we discovered what happened was a good thing—in some cases, nothing short of divine intervention.

Maybe the single best thing we can do about the wall, is to do all we can—prepare, plan, carefully execute—and maybe hit fewer walls in our efforts. But when we do collide, we need to focus not on emotional upset and anger but on why we hit a wall and what we can do about it.

Disappointment, riding shotgun on the train of emotions we’re feeling, requires a different skill-set. It requires permitting ourselves to feel the emotion for a short time. And then us exerting the self-discipline required to move beyond it. We know why we’re disappointed. It’s justified. But is this one of those times we’ll Because if we don’t move beyond it, we’ll be stuck in the past, stymied and unable to move forward. We know people who have done that, who are still doing it. They let one event dominate their entire lives. Permit it to cause them to regret the past, let it steal their present and their future. We want no part of that. We want to move beyond it, and get on with our lives. Perhaps, we will look back on this disappointment with regret, but we also might look back on it with gratitude that we weren’t successful. We don’t yet know. But it is possible.

And that possibility is enough to grant us enough solace to pull ourselves out of disappointment-mode and into the restructuring-mode. What can we do to fix it? We need to get out of our emotions and into our intellect. We need to get creative, seek creative and constructive solutions.

Often, making that shift from disappointment to restructuring seems like such an ordeal—a high mountain for us to climb. But it’s not. We’re overthinking it. Letting it become bigger in our minds than it deserves. The shift simply requires us to change our minds. We do that all the time. This time, we change our mind to get a different perspective.

Any of us can wallow in disappointment and hang there for as long as we want. From experience, I can share this: Don’t expect a lot of company. We’ve all heard that misery loves company, but it truly doesn’t. Misery likes nothing. So most people—including those feeling miserable—don’t want to hang around someone miserable for long. If they’re going to be miserable, they want to focus on their own misery, not yours.

Now it is true that when you’re miserable nothing is as arrogant as sunshine or some Pollyanna, offering you platitudes. But does that resolve the challenge you are facing? No. This is why, personally, the smallest amount of time I can spend being miserable the better. I hate feeling miserable. Yet I recognize the wisdom in giving yourself time to emotionally react to disappointments. Misery and emotional reaction time are however two totally different things.

In my writing world, one of the biggest disappointments you can suffer is a rejection letter on a submitted work. You create something from nothing and work long and hard, pouring all you have and even that you didn’t know you had into it, and someone says no. Some writers consider their books their babies. They’re not. The moment a writer decides to sell what s/he writes, the books become products, and the writer who accepts that fact will be miserable and disappointed a lot less than one who doesn’t. The truth is, if you write and submit, you’re going to get rejection letters. What many writers don’t realize is, regardless of how high on the success ladder a writer gets, s/he rarely stops getting rejection letters. But that’s the truth of it. See why the baby needs to be thought of as a product now?

So I discovered this truism years ago, and I set a rule for myself. When I got a rejection letter, for a full five minutes, I could stomp, rant or rave. After that, I was done with the disappointment and I moved on to what’s next and where do I go from here. That’s the value I assigned to my projects being rejected.

No doubt many others thought I was insane to limit disappointment to five minutes, but let me share something significant with you. I write only stories I love. So if someone else doesn’t love them, it’s okay. I still love them. And—this is truly important—I’ve been called by writers who received rejection letters and were despondent, devastated, and even very close to suicidal. There is nothing constructive in any of that. Nothing that evidences faith in yourself and your work or love for your project. It is an evidence of placing too little power in yourself and your work and too much power in the opinions of others. And no matter how well informed, how gifted or educated, theirs remains a subjective opinion. The lesson: reclaim your personal power and love your work.

If you see others despondent, devastated, or near suicide once, much less over and over again, it’s more than enough evidence for you to conclude it wise to change your mindset and not dwell in disappointment. To move beyond it quickly before those ruthless demons sink their sharp claws into you. Because if you don’t move beyond quickly, they will. And you will suffer.

So if disappointment is chewing you up, the first thing to do is give yourself your version of five minutes, then recall all the good in what you hoped to achieve in your effort. Then, shift your focus to how you can still achieve it.

Disappointment is going to happen. But it doesn’t get to rule you for a second longer than you allow. Instead of dwelling on what’s wrong and what you failed to do or think you can’t do, focus on what’s right with what you want to do and why it’s important to you and how you can succeed. Bottom line, that’s the only way you’re going to make it happen.

And no matter how many disappointments you suffer—and you will suffer many because when you attempt great things, you fail your way to success (by nature, success is a journey of failed attempts and efforts)–remember this: you might fail a thousand times. But if you attempt a thousand one times, that one could make all the difference.

Knowing that you could be one or two or ten attempts from success kind of sucks the power right out of disappointment, doesn’t it?

I wonder if knowing that was the source of the old quote: So long as there is life, there is hope? It could have been, and maybe it was…

All I really wanted to say in this article is this:

In yourself. In what matters to you. In what you’re trying to do. And don’t give walls or disappointment the power to knock you off your course. You might think you can’t take one more disappointment or survive smacking into one more wall—and surely you wish you didn’t have to; we’re all bruised and battered and wish that—but you can take it. You can get beyond it. And that’s the most important thing to remember: you can.

← Previous Link: Prev: Believe in Yourself Next Link: Next: Altar →

One Incident Changed Everything--Twice   Death and loss and grief impact us in different ways but the burden is always...