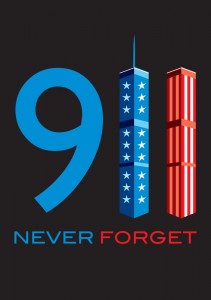 It’s 9/11. Twelve years have passed. Do you remember where you were and what you were doing that day? The way your life was before then? All the ways in which your life has changed since?

I was at home that morning, writing at the computer. The news was on the TV beside my desk. The first plane striking the tower happened. The anchors speculated on whether or not it was an accident. I knew it was not. I’ve been married to a pilot most of my life. They’re trained–and it’s an innate reaction–to miss everything humanly possible. A plane turning to aim for a building is anti-pilot.

Then the second plane hit and John Scott was the first to say what I’d been thinking. It was an intentional attack.

After that, like everyone else, I was fixated on the news and resigning myself to the fact we were at war. I mentioned this on an author’s loop and was firmly told, “Oh, no. It’s not war. There is no war.”

But today isn’t about all of outgrowth of the attacks. It’s about remembering those we lost and the day our nation irrevocably changed. We had the privilege and luxury of believing that we were safe on our homeland. We learned a lesson that most of the rest of the world already had learned: we are not.

Our history. Who we are. What we stand for. What happened on 9/11. And those who sacrificed for us all.

We must remember. We must not deny. We can never forget. For the moment we do, we become more vulnerable to the same or worse.

So today, pause, stop, and think about 9/11. And then join me in remaining alert and diligent. Do so for yourself, your family, your country. Do so because the costs of not doing so are too great, the scars too deep, to not do so.