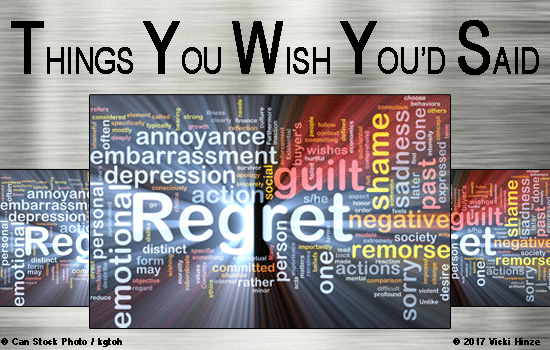 Ever had an experience then later think, I wish I’d said…?

Maybe you were talking to your boss.  About your future with the company.  About a project.  About a new slot opening or a transfer or any other matter of importance where you felt you probably should keep quiet.

Maybe you were talking to your parent.  About a rule or a consequence for some action.  About a class or a path for your future that you wanted to take or didn’t want to take.

Maybe you were talking to a friend.  About any of the things friends discuss, including your friendship.

Or maybe–and in my experience, these are toughest–maybe you wish you’d said something to someone who was dying and didn’t.  Either because you didn’t want to upset them or because you were so upset you couldn’t talk past the boulder in your throat because your emotions were rioting.

My point is that we all seem to later wish we hadn’t said things, but we also experience times when we wish we had said something and didn’t, too.  And we’ve learned the hard way that sometimes it takes more courage and grit to speak than it does to stay silent. The risks are higher…

Some say he was between the veil–one foot in this world, one in the next.  But that’s another story.  In this one, the point is that he talked and I listened and learned things about his childhood that I didn’t know.

He wasn’t himself, clearly.  Yet his words held the ring of truth and the pain of a little boy growing up without a mother or a father (who also died before my dad was two years old).

Then in a moment of clarity just before he died, my dad sat up and clear-eyed and minded told my mother and me goodbye.  His last words to me were, “I love you, Tiger.  God bless.”

Often in the years since, I’ve wished I had seized those few moments to thank him for all he’d done for me as a parent.  He was not my friend.  I had plenty of friends.  He was from beginning to end, my parent and he did all parenting implies.

I knew what parenting took.  I knew he’d sacrificed for me, and that there had been times when I’d stepped on his toes and on his heart.  I wish I’d acknowledged all he taught, an appreciation for all he instilled by example and all he encouraged by attitude and outlook.

But the wound of losing him cut so deep and was so raw, and that boulder in my throat was so big, I couldn’t say anything more–and then when I thought I could, it was too late.  I watched him release his last breath.  The opportunity had passed, and there would never be another.

In my mind, I still talk to my dad.  I say now all I wish I’d said then, at that moment.  And I’m comforted at knowing I expressed appreciation to him many times during his life.  But I still regret not seizing that moment.

Maybe saying I love you was enough.  Believing that it might have been gives me solace.  Yet it’s been over twenty years and I still wish I had said all those things and more.  I still regret not having done it.

When my mother was dying, I did say those things.  And I saw her response to hearing them.  She lived a time longer and we shared much more.

The day before she died, she told me how much all we shared meant to her.

You see, these things we wish we’d said aren’t just said for us, they’re said for the other person, too.

The Psalmist said in 39:2 “So I remained utterly silent, not even saying anything good. But my anguish increased.”  We all learn this lesson, I suspect, at some point in our lives.  But there are other lessons, too, where the roots go back thousands of years…

“Therefore I will not keep silent; I will speak out in the anguish of my spirit,” says Job 7:11. “I will complain in the bitterness of my soul.”  This speaks to airing differences and hurts to clear the air and settle them.  So that the hurt doesn’t fester and grow stronger and rob you of joy and peace.

Interestingly enough, Job–31:34 shares an often cited motivation for staying quiet.  “Because I so feared the crowd and so dreaded the contempt of the clans that I kept silent and would not go outside—.”  We don’t want to upset or anger others, or to look foolish.

But this kind of silence perpetuates wounds festering and adds regret.  We should speak up, speak the truth.  When we don’t, our silence condones, and that creates situations riddled with untruths and misconceptions, leaves others with false impressions.

There are times, of course, when silence is golden and listening is the wise path.  Recognizing those times requires judgment, and often that’s gained through experience and guidance.

One path to checking yourself on when to speak up and when to stay silent is to listen to your inner voice.  The nudges you feel to say something or urges warning you to keep quiet.

On its own, the nudge or urge isn’t reliable.  Determining what is driving it is.  If anger or upset is at the wheel driving you to speak or not, question yourself. If love or mercy is the driving force, then say what you feel nudged or the urge to say.

The important thing is to act from your higher self, not your base self.  To not regret what you do or you don’t do, seek to find or bring peace, comfort, and solace in what you do or do not say.

Your decision won’t always be right.  But using your innate tools and measuring in peace, solace and comfort (for you and others), you’ll be right more often than not.

Asking yourself why you’re feeling nudged or that urge.  That’s key.  Why does speaking or holding your tongue matter?  Answer that and you’ll know if it’s your higher or base self doing the nudging or urging.

Answer that and you increase your odds of having fewer occasions when you ride your own back or chew yourself up inside with wishes or regrets about things you wish you’d said.

END_OF_DOCUMENT_TOKEN_TO_BE_REPLACED

END_OF_DOCUMENT_TOKEN_TO_BE_REPLACED
Manage Cookie Consent
To provide the best experiences, we use technologies like cookies to store and/or access device information. Consenting to these technologies will allow us to process data such as browsing behavior or unique IDs on this site. Not consenting or withdrawing consent, may adversely affect certain features and functions.
Manage options Manage services Manage vendors Read more about these purposes
View preferences
{title} {title} {title}