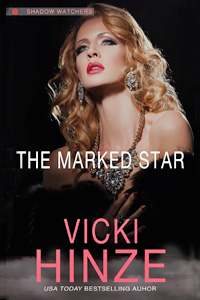 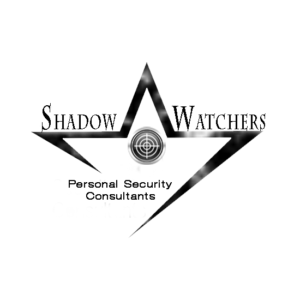 #3 The Marked Witness (not yet released) (Sam) 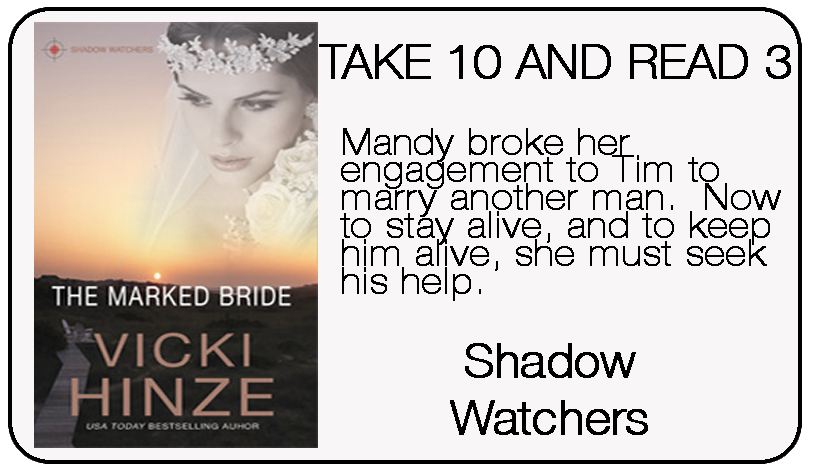 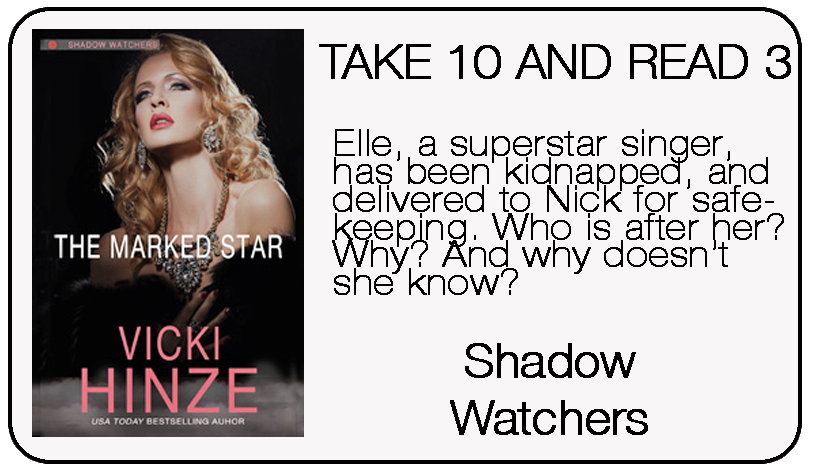 “A thriller you won’t soon forget, especially if you’re a fan of the romantic obsession mastered by Alfred Hitchcock in Vertigo or Otto Preminger’s Laura. Vicki Hinze’s latest blends disparate elements together with surprising ease, and the result is a darkly original tale where hope and faith provide the light. The story, though, isn’t so much about faith conquering all so much as coming to the realization of its limitations and learning to overcome them, which comes define Brandt’s very heroism. Such spiritual elements would’ve overburdened the tale in lesser hands. Good thing’s Hinze’s are as sure and steady as they come, making Forget Me Not not to be missed.” (On Forget Me Not)

–Providence Journal
The Shadow Watchers were introduced in the Crossroads Crisis Center novels, now they return with their own stories…

Superstar Elle Bostwick is kidnapped in London. But who has kidnapped her?  NINA, a ruthless, powerful organization of opportunists who will do anything to anyone anywhere to gain access to something Elle has that they want?  The CIA, who is equally determined to prevent NINA from gaining that desired access? Why kidnap a superstar singer? Why Elle?  And why does she not know what they’re after?

Elle mysteriously appears at a Shadow Watcher’s wedding reception, and Nick Sloan is ordered to keep her safe indefinitely.  Yet the Top Secret entity issuing the orders doesn’t say safe from what or who is pursuing Elle. Not even why, which is atypical.  Why is this happening now?

Nick and Elle have a history.  Determined to never need or want or love anyone because of his horror show of a family, Nick left her without even saying good-bye.  He didn’t know Elle had been walking wounded, too.

Now she’s burst back into his life—with baggage that could get him and the other Shadow Watchers killed.  Who is on their side?  Who is the real enemy?  What does that enemy really want?  And most importantly, will they find out before they end up dead?

CAN LOVE HEAL THEM?  IS IT ENOUGH?

Nick willingly risks his life for Elle, does does he dare to risk his heart?  Does Elle dare?  Both have little reason to trust…except for the hope of love they find in each other. Can love heal such deep wounds? Spare the lives and the hearts of Nick and The Marked Star?

Forget Me Not (Ben)
Deadly Ties (Mark)
Not This Time (Joe)

Note: Wed to Death is a Shadow Watcher Short Story dealing with a different team.