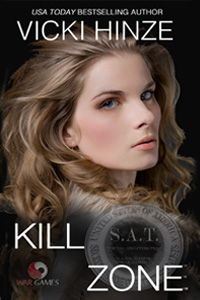 ~Jeff Ayers, Author Magazine
The wife of a biological warfare expert, murdered. Her husband, accused of killing her. Her intelligence operative brother-in-law, the target of assassins determined to hide the truth. All battle a formidable enemy adept at infiltrating the highest levels with body doubles. What is the Secretary of Defense to do?

He has only one choice: To activate the S.A.T.—Special Abilities Team.

Dr. Morgan Cabot heads the S.A.T. team and is ordered to interdict Captain Jackson Stern, the brother-in-law of the victim and brother of the accused killer—or his body double—and to determine which he is before he leaves international waters. Morgan must positively identify him and determine how the team’s enemy and feared adversary, Thomas Kunz, connects to this homicide case. Who killed Laura Stern, and why? Is her husband guilty, or had he been framed? And has classified intelligence on biological warfare been compromised, national security been breached? Who and what is the ultimate target?

Morgan’s special abilities have made her an outsider most of her life. She’s accustomed to skeptics; being highly intuitive has wrecked her every personal relationship and many professional ones. She’s prepared to face the challenges on this case. But she is not prepared to face Captain Jackson Stern. He matters. His opinion of her matters, and, depending on her findings and how this case resolves, he has a lot to lose.

Murder. Power. Resolve. Facing steep challenges from her allies and enemies, Morgan expects their worst, including being targeted for assassination. But not until she interdicts the secretive captain does she realize that to find her answers and accomplish her mission, she must risk her life and her heart.

1.Chapter One introduces some of the special talents of the S.A.T.. team. In addition to combat skills, the women have special abilities that they bring to play in their positions.      Women especially have always been said to have more empathy, and ability to “pick up” on bodily cues from others.     Have you ever known, or are you, someone like this?       Have you ever had a “bad feeling” about someone or a situation that turned out to be an accurate perception?  Trusted someone without knowing why?

2. Science has shown that there are indeed visual cues that a trained or naturally  sensitive person can pick up in order to decide on trust, truth or fiction.   What would be a visual cue that would indicate that a person is trustworthy or hiding something?   Do you think these visual cues can be learned and manipulated to the person’s advantage?

3. The Special Abilities Team (S.A.T.) members skill largely comes from careful observation of behavior.   The enemy, Thomas Kuntz, depends a great deal on substituting “doubles” or virtual clones of key people within the United States security systems.     If you were to be “doubled,” what would be some of your unique mannerisms that would have to be duplicated in order to make the fake-you pass close observation?   Do you have a special habit, dislike, or verbal expression that instantly identifies you to your friends?   What about your family or spouse?    Who do you think it would be hardest to fool – your mother, your best friend, your spouse?   How about your family pet?

4.Sleep deprivation is lack of the proper amount of sleep needed to function at a normal level.   If the women of the S.A.T. team lack sleep, or do not get the bare minimum of two hours sleep, they will suffer from  a severe loss of their special psychic ability.   Sleep deprivation has even been used as a tool for torture.    If you have been losing sleep, how does it affect your performance at your job or at home?    How do you think people with stressful and demanding professions such as soldiers, doctors, or firefighters cope?   New mothers frequently report depression and inability to cope when learning to take care of a demanding infant that interrupts normal sleep patterns.     What about politicians, who frequently spend hours in planes or meetings and then must make important decisions?

5.Jackson states that visiting a psychiatrist or counselor would be a job-killer for his brother, Bruce.   Why would this be?   Is this belief true or false in most jobs or only specialized ones?   Would visiting a psychiatrist be perceived as a weakness in your job or family?    If you need such help, would you get it, or hide the problem as best you could?  Do you think real help is possible for personal problems from psychiatrists and psychologists?   Would you rather depend on a chemical solution such as antidepressant, self-medicate with drugs or liquor, or meditations such as prayer?

7.When Morgan’s family discovered her intuitive abilities they rebuffed and rejected her.   This type reaction can occur with other talents discovered in children, such as unusual math or musical  abilities.   If you were Morgan’s parent, how would you advise her regarding the developing abilities she’s manifesting?

8.Much depends on DNA findings in the progress of the investigation of Bruce.   Many criminal cases are decided upon DNA evidence.   Old cases can be reversed and innocent prisoners freed.     What do you think about this type of evidence?   Is it “iron clad?”   Can mistakes be made  in taking evidence, or at the lab processing the DNA?   Currently DNA is used as an iron-clad method of proving identity.   Might this change with developments of new scientific methods?    Would you be willing to accept the evidence of DNA as conclusive in a case involving you or your family?

9.While Jackson clearly loves his brother, Bruce, and his sister-in-law, Morgan suspects he might be a “commitment-phobe.”   In their line of covert work, surely a close relationship with a mate would be impossible without total commitment of each partner.    Considering that each partner elevates his/her personal safety risks simply by being associated, would you be able to hold up in such a marriage or relationship? What would be required?    Would you be able to raise children and teach them moral values when your life is built on secrecy, danger and the ability to kill another human being with stealth and efficiency?

10. Dr. Joan Foster is about to have her baby.   Do you think this pregnancy was wise?   Dr. Joan admits it was unplanned.    Will the child be an unwitting target for those opposed to Dr. Joan’s line of work and her allegiances?    Should she tell her child about her line of work and why she does it?    When would be the right time to tell a child this?

11. Morgan and Jackson form a romantic partnership. What kind of a working and family team will they make, considering that they know each other’s work and understand what is required?   They both have intuitive abilities.    Would this strengthen a romantic relationship or weaken it?    Would you want your partner to know what you are thinking in a romantic situation?

“There is a murder and the husband is accused. The brother knows he’s innocent and convinces a psychologist that works for a secret military outfit to help him prove it. Kill Zone by Vicki Hinze combines romantic suspense, military technothrillers, and paranormal elements to great effect. I was honestly surprised how much I enjoyed the story and the memorable characters.” –Jeff Ayers, Author Magazine

“Sizzling Romp James Bond style Vicki has given us another rocket-paced military suspense in her War Games series. The first to introduce the concept of the diabolical Thomas Kunz–a terrorist and black marketeer bent on taking over the world by infiltrating the West’s intelligence agencies with double agents–was BODY DOUBLE, followed by DOUBLE DARE, DOUBLE VISION and now KILL ZONE. The difference with Kunz’ doubles is that they look and sound like the original agents but are actually opertives who have been mentally, physically and surgically altered to follow his orders and steal top-secret government information for him. This time Kuntz targets a special abilities team led by psychologist Morgan Cabot and her two associates, Taylor Lee and Jazie Craig, after they are assigned to solve the mysterious death of the wife of a U.S. biological warfare expert. This team of “intuitive” parapsychologists consults for Colonel Sally Drake who runs S.A.S.S.–Secret Assignment Security Specialists, a group of highly trained American operatives who work outside normal protocol to protect the United States, but the American public can never know of their existence. Using S.A.S.S. as her anchor, Vicki Hinze presents each book like an episode in a television series. Only her gift for creating superb characters carries our suspension of disbelief so we can enjoy these stories forged in what seems a bizarre concept of identity theft. Kill Zone entertains and dazzles.” –Bonnie Toews, At the Crossroads of Humanity

“WAR GAMES: KILL ZONE is a fast moving story that reacquaints readers with the adventures of the S.A.S.S. team that began in DOUBLE DARE, and continued in BODY DOUBLE and DOUBLE VISION . . . Kill Zone is an action packed suspense that keeps readers glued to the page.” –Livia Holton, TRRC