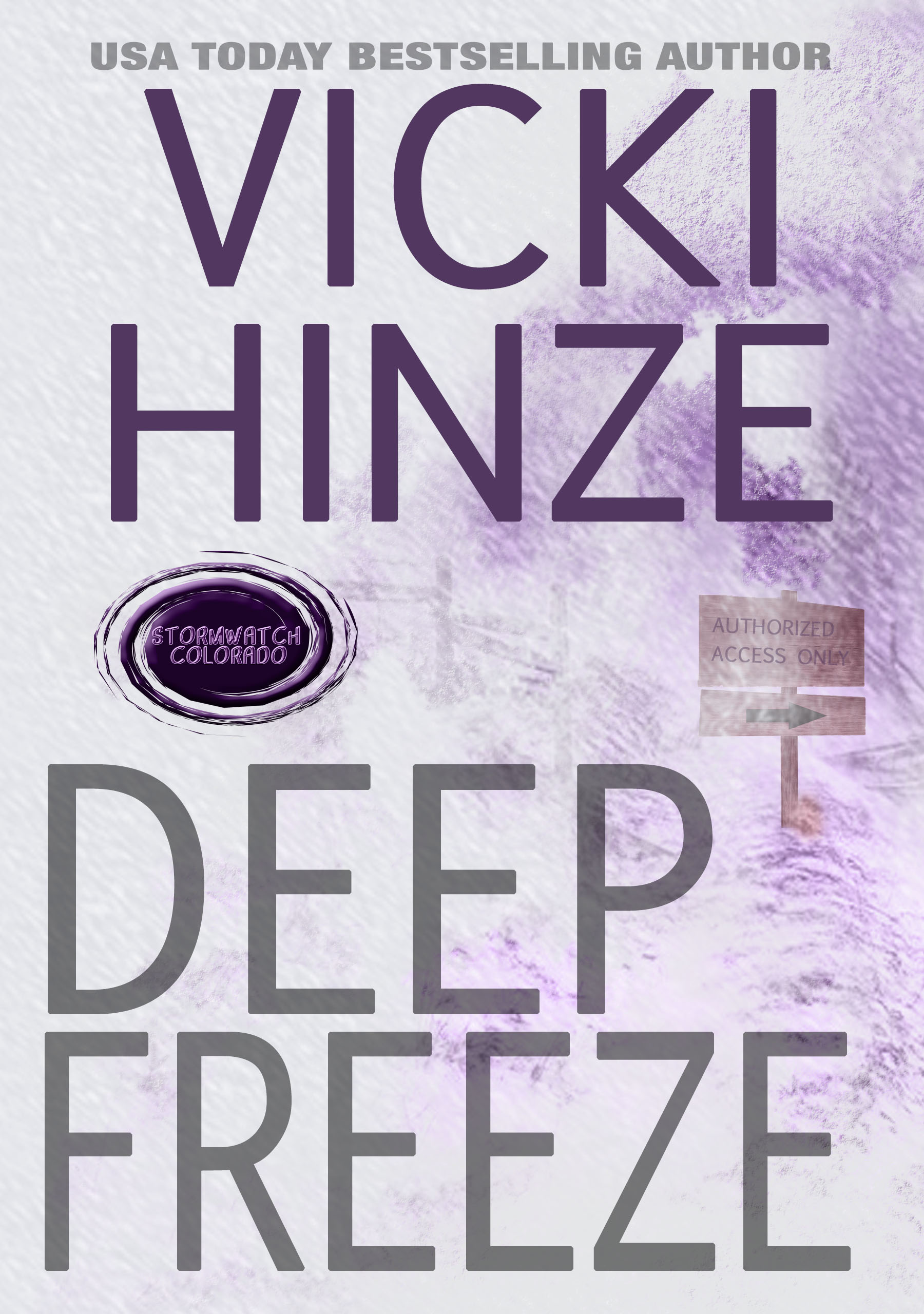 “The heroines in a new genre [women’s action-adventure] of romance novels are smart and tough enough to take down anyone who gets in their way.”

The storm sweeps in like a thief in the night…

Winter storm Holly is the worst in eighty years bringing high winds, subzero temperatures and snowfall better measured in feet than in inches. The weather paralyzes everything in its path, but, in this storm, weather isn’t the only threat.

Emma Miller, a probationary security consultant posing as a reporter, is stranded at Portal International Airport in the worst storm in eighty years. She’s reassigned to protect a top-secret High Containment Lab in the international airport that houses the deadliest bio-contaminate diseases on the planet. A lab under attack by international terrorists who want those pathogens to sell on the black-market.

Dr. Gregory Mason Martin is a bio-containment specialist who runs the top-secret lab, and he knows Emma well. They grew up together, went to school together, and she’s always fascinated him, but she has a long-standing habit of going through men like water, so he’s kept his distance. He doesn’t dare to trust her or her abilities.

Now, all these years later, they must work together to protect the lab and stop the terrorists from obtaining the pathogens. And they must protect the pathogens from Holly, the deadly storm barreling mercilessly toward them. If those pathogens are stolen, the world will be held hostage, and worse, if mishandled, the country could be facing the worst pandemic in history. A pandemic that in short order could wipe out not just cities and states, but the entire nation.

Both are willing to risk their lives. Both are reluctant to risk their hearts. Yet events prove neither of them is who they were thought to be. And a fierce battle against terrorists and the storm proves challenging but no match for the challenges chambered in their human hearts.

A MUST READ!  FAST AND ACTION PACKED!

Winter storm Holly means business as it bears down on Colorado, and travelers are stranded all over the state including Portal International Airport. Unbeknownst to these weary, trapped travelers, a top-secret High Containment Lab containing some of the deadliest pathogens known to man is right below their feet! And worse, there is credible evidence that an attack on the lab is imminent! Emma Miller, a probationary security consultant who has been grounded in Portal on her way home from her last assignment but now is redirected to handle this emergency.  She is totally qualified but the person in charge just happens to be the one man that has always doubted her.
Dr. Gregory Mason Martin is a bio-containment specialist who runs the top-secret lab and knows Emma well.  They grew up together and went to school together but in his mind, her “flighty” nature leaves him doubting her abilities to stop the threat and keep the lab safe from the terrorists determined to breach security and the lab to get their hands on the deadly secrets within. With threats coming at them from all sides and lives on the line, Emma and “Mason” might just learn a few things about each other and themselves as they fight to keep everyone safe from both nature and the greed of men willing to set off a pandemic of epic proportion for the love of money. Fast and action-packed, book two in this amazing series is a must-read.  –JW REINHOLD

This is the second book in series and is really great. Mason is the scienctist who got away.
Emma is the security specialist sent to help.  Mason has been working in high security lab in the tunnals of the airport at Portal. it is going to be moved but rumors say it will be raided before then.
Holly the snowtorm of the century will help the invaxders put unless Emma can stop them. this is a great way to do series. really good books.  –Morgan Shelto

Contemporary Romantic Suspense, Thriller
Emma Miller is an undercover agent for a covert govt. agency. She is stranded in the airport by Holly, the storm of the century, when she is notified that she now has to protect a bio-lab, under the airport, from a bio-terrorist group. When she is sent to the director of this lab, she runs into Dr. Mason Martin, a man from her past that she has never forgotten.
Neither trusts the other because, Emma has always felt that Mason never liked her and, Mason has always believed that Emma went through men like ‘a buffet.’
This is a fascinating, nail-biting, roller coaster ride of a story that you will LOVE. It will also scare you to your soul!
If I could give it a 10 star, I would!!! –CJr (Amazon)

Awesome Suspense ,Storm Holly has made a impact at the airport ,5,000 plus people are stranded .Emma happens be there at the right time, she has to make sure the secret lab that’s holding deadly pathogens is not breached.Mason who runs the lab is surprised to see his old school mate unaware of what she’s really doing there.They have to work together when danger strikes in this fast paced, suspense , great build up , page turner. ==Beatrice Followill

OMG!!!OMG!! What an intense suspenseful read. This was my first read by this author but definitely will not be my last. I hung on to every word, every page anticipating the next. A rollar coaster ride to say the least. Vicki Hinze delivers silver screen quality in her characters and in such vivid details throughout the entire book. Greatly impressed!! Highly recommend. –Tashia Jennings

Book two of the Stormwatch Series by Vicki Hinze. As the worst blizzard in 80 years, Holly, bears down on Portal Colorado, Emma Miller wonders how she can get home. Emma learns this closed airport with thousands of stranded travelers is her next assignment for her undercover job as a security specialist, in training, for the Silencers Agency. Unbelievably the airport sits on top, literally, on top of a High containment lab. Adding the impossible situation of protecting this supposedly highly “secret” bio- contamination lab alone, against an imminent terrorist attack, the man she must work with, the head of the lab, is Dr. Gregory Mason Martin. A man she’s known for many years. The man no other man could live up to. The man who had no interest in Emma but stole her heart. As hard as she tried she couldn’t find any other man, and she went through a lot, who could keep her interest. Together they must defend the lab. He has never even fired a weapon an they must stop the inconceivable theft of one of the worst pathogens in existence. He doesn’t know of her special skills and she’s not allowed to tell him but it obvious as she works to eliminate those bent on stealing what could destroy mankind. All the while a storm rages and thousands of people are oblivious to the dangers that lay below them. Fast paced read as Holly wrecks havoc on the area.  –LoriLou

Emma is a security specialist sent to the airport in Portal, Colorado, just as a history-making snow storm is bearing down on them. Her assignment is very unusual, to protect a secret lab built way underground that houses some deadly pathogens. The action was fast-paced and non-stop, taking the reader deep into the bowels of the airport. In fulfilling her duties, Emma is forced to work with Mason, a scientist who was once well-known to her. The story was believable and terrifying at times, with terrorists striking at the most opportune time but also the time when little assistance was available to those trying to keep the lab safe. Vicki Hinze did a great job of continuing the story line of the Storm Watch series, creating a scenario that kept me enthralled from beginning to end. Fans of romantic suspense will definitely enjoy this book and it is a clean read.–Vickie Watts

Emma is a security specialist sent on a mission to help out. She is sent to where there is a high security needed but sent in as a reporter. She is on an airplane when it they make the announcement that Holly The Storm watch has come into effect. They are now stuck at the Airport. When she call to find out her next assignment and finds out it is to access the situation and protect the the chatter from become truth.
Dr. Mason is in charge of the his faculties and when Emma arrives he is not happy. Emma is there to keep them safe. Even though they have a background together .
He was her through and think he know her but don’t.
During the walk through they get attacked by Holly the storm some terrorists who is trying to blow up the Lab that Dr. Mason has been working at. With the blows it has caused very terrible things to happen.
One of the colleagues of Drs. Child becomes ill during the attack. You will have to get to read from the first page to the last it is no stop from front to back.
This is very non stop action and emotional story. I love the characters and I felt like I was there in the book when I read it. It felt very real to me.

HOLD ON TO YOUR SEATOh Dab burn Deep Feeze was awesome! Almost right at the beginning it took off and kept you on the edge of your seat. This is the 2nd book in the series Storm Watch. Stranded at an airport with 5 thousand people in the middle of Holly. The worst winter storm Colorado has ever seen. With a lab underground level that has the most dangerous viruses. Will they prevent a world wide disaster from happening when CAR tries steal a certain virus from the lab. Wow! A MUST READ. A 5 star for sure. –Amazon Kindle Customer

This Storm watch series has started with a bang. The second installment by Vicki Hinze continues the romantic suspense genre approach. A small plot within a plot caught up in the overarching plot of a moving, devastating storm. Circles within circles. You will love every aspect of it. –Chook