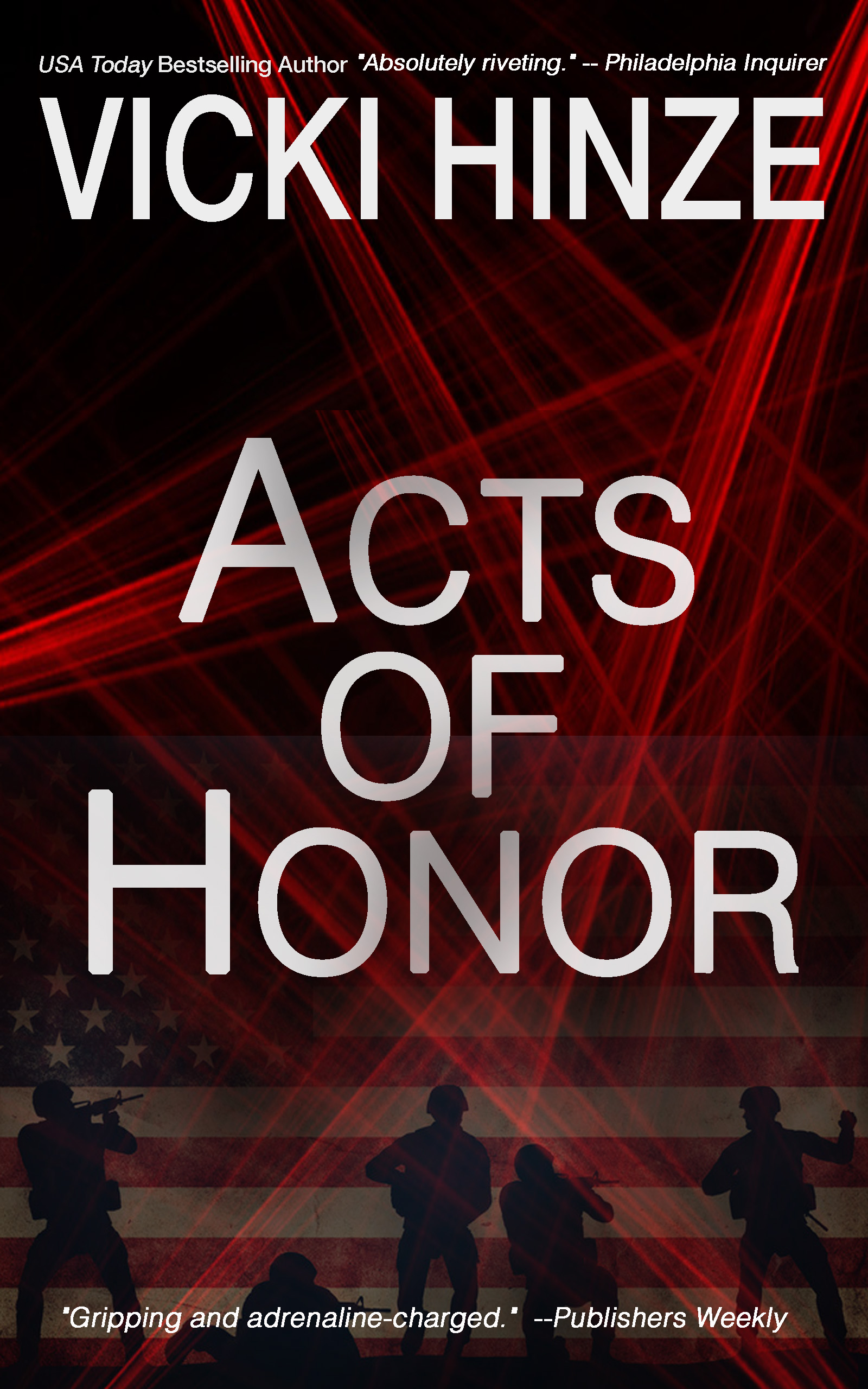 She risked everything inside the darkest recesses of his mind.

He survived a mysterious mission more horrible than the mind can imagine; only she can break through the trauma and get him to talk. But if she succeeds, they both may not survive.

Dr. Sara West knows only that her high-security military patient goes by the name “Joe,” that he’s in a catatonic state and can only repeat the code words, “I wept,” and that his post-traumatic stress disorder is a result of his last mission as a Shadow Watcher—a spy who spies on other spies. Her brother-in-law was also a Shadow Watcher. He committed suicide in the same sinister military facility where Joe, and other military men like him, are now in treatment. Sara wants to learn what caused her sister’s unshakable husband to kill himself and, in the process, to heal Joe, a compelling man who wins her love. But the secrets inside him reveal a shocking truth. One she isn’t sure they can overcome.

Acts of Honor arose from a question in my mind at the time: In the military, you’ve got all these people with Top Secret (or higher) security clearance information in their heads. What happens to them if, for some reason, they become mentally diminished? Then I asked myself: What if some nefarious someone else caused them to become mentally diminished? What happens to them? You couldn’t just release them–not with all the people who’d love to know what these people know. That would be dangerous to them and their families. So what do you do with them? For them? I had to write the story to find out–at least from a fictional perspective. The result is this book. I hope you enjoy the journey!

From Publishers Weekly A lengthy stint as an Air Force wife has provided Hinze (Shades of Gray; Duplicity) with plenty of fuel for her edgy military-themed romances. Her latest romantic thriller centers around a civilian psychologist, Dr. Sara West, who has been coerced into military duty. Acting undercover as an Air Force major, Sara enters a maximum security facility in Mississippi to direct a short-term research project on five patients suffering from post-traumatic stress disorder. All the patients are men, and all have been reduced to a catatonic state, each one repeatedly uttering the phrase “I wept.” It’s Sara’s job to find out what has happened to them. She’s drawn to one patient she calls Joe, a man who worked as a Shadow Watcher (a spy who spies on spies). As Sara helps Joe heal, she finds herself falling in love; through him she learns that “I wept” is an acronym for a place more horrible than the human mind can endure. Gripping and adrenaline-charged, Hinze’s plot will appeal to fans who like their suspense razor sharp. (Dec.) Copyright 1999 Reed Business Information, Inc.

“A military intelligence/romance/mystery…about a secret military hospital and patients who are diagnosed with Post Traumatic Stress Disorder (or are they?) and the civilian doctor who is part of an undercover mission who’s goal is to figure out what happens to these patients and what dangerous secrets have they or have they not told.  The story is very suspense filled and very well written.  You never know who is telling the truth and who the good guys vs. the bad guys are.  One of the main characters I didn’t have truly figured out until the second to the last page!   If you like military–romance–suspense– just a great read–you have to pick up [Hinze’s] books!”  – The Jackson Journal

“Utterly thrilling from beginning to end.  So suspenseful you want to put it down.  Hinze has proven herself a true master of military romantic suspense tales.” – Romantic Times

“FIVE STARS.  Very few authors do military tales quite as well as Vicki Hinze.  This time, Ms. Hinze combines a military espionage thriller, a medical research tale, and romance into a fabulous suspense story…[that] never eases up.   Acts of Honor has cross appeal to readers of romance, espionage, and suspense as an entertaining thriller.”  – Painted Rock

“This was a truly amazing book.  Ms. Hinze had me turning pages and hoping that the book would never end.  This book shows quite a bit of how the secret part of the military works.  It proved that Ms. Hinze has a true talent as a military suspense writer.”  – Old Book Barn Gazette

“A nail-biting psychological military romantic mystery.   Hinze has captured the mystique of covert military actions in her riveting portrayal.  This is one book that won’t let you put it down!”  – Affaire de Coeur

“Vicki Hinze speaks in a voice unique to the genre.  Acts of Honor reads like a mystery with touches of Tom Clancy.  If you seek a story with characters of depth, a different twist, tingling suspense, and bittersweet love, buy Acts of Honor.”  – Reader to Reader

“Acts of Honor delivers.  If you love military romantic suspense, this book is definitely for you.”  – Romance Book Reviews

“The reader develops…a newfound understanding and a deeply rooted respect for the sacrifices of our military personnel, and their families.   Hinze wears her patriotism proudly and unabashedly with an enthusiasm we should emulate.  As with Duplicity and Shades of Gray, Acts of Honor weaves a military background into a relationship between a man and a woman making their love even more meaningful due to the shared admiration for family, country, and freedom.   [Hinze’s] books represent the good things we were brought up on, and while life can be complicated, she clearly demonstrates what should be important to us.  A good, solid feel-good read.”  – Word Weaving

“I have never enjoyed a book more or found a book that difficult to put down.  Acts of Honor is truly the “best” book I’ve read in a long time.  This suspense filled story kept me on the edge of my seat and totally enthralled from the first page to the last.  I’d love to see this made into a “movie of the week” or motion picture…it’s really that good!   Kudos to Ms. Hinze for her stunning new release!”  – New-Age Bookshelf

“A fast-paced tale filled with enough unexpected twists and turns to give a reader whiplash.  A compelling, military thriller that kept this reviewer, who normally is not a fan of military books, clued to her copy long into the early hours of the morning.”  – The Romance Reader

“Intense spine-tingling action.   Shattering conclusion.  I was exhausted when I finished Acts of Honor, it’s that intense, but it’s well worth every draining emotion that you feel.”  – Romance Communications

“My book review today is on Acts of Honor. I ordered this from Amazon and didn’t realize it wasn’t a Christian Suspense. There was a lot of language that is not normally in the books I read but it wasn’t obsessive and it was necessary in story. Men in a mental hospital that had been tortured wouldn’t use Christianeze. I love Vicki’s books and this wasn’t the one to disappoint me.    This is an excellent military thriller. I come from a military family and I found the story very plausible but quite heart stopping. I would hate to think of things like this happening to my son, who was in the Special Forces. I really liked this book and will read the rest of this series.”    –Glenda Parker, Fiction Writer

“Hinze is a brilliant writer who I first enjoyed with her Seascape Trilogy, which I would recommend any lover of romance have in their collection, but this is a romantic suspense and the suspense just keeps piling on. If you enjoy a book that you will not be able to figure out the ending and has a touch (but only a touch) of romance than I recommend this book. You will not be able to put it down.” –Kimberly, Books-n-Kisses

In Trade and Digital.  Published by Bell Bridge Books in 2012.

ACTS OF HONOR TO BECOME A FEATURE FILM! Don Jordan, CEO of Resurrection Road Media will collaborate on an upcoming feature film based on Vicki’s novel, “Acts of Honor.” The movie version of “Acts of Honor” will be produced in association with G-Star Studios, Palm Beach, Florida and film/video professionals Shane Reynolds (www.ColorEarth.tv), Earl Newton (www.StrangerThings.tv), Scott Clements (www.BrownDogSound.com) and Paul Sinor (www.ValhallaMilitary.com). “Acts of Honor” is expected to go into production in late 2013.