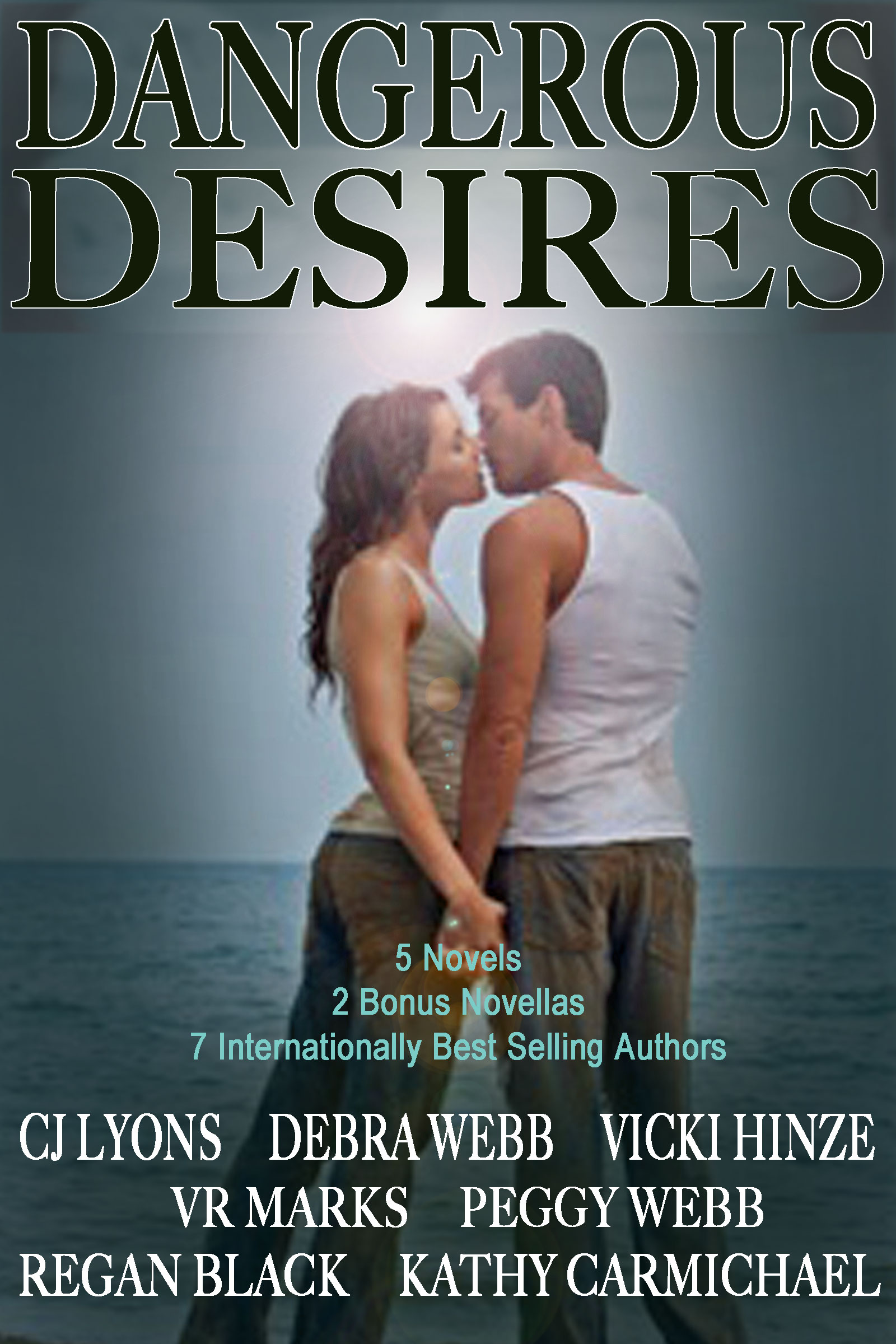 “5 stars Excellent boxed series! Wow, some of my favorite authors in one boxed set. What more could I ask? I’m enjoying each and every story!”  ~Kathy Boswell (Beaufort, SC USA), Amazon
“This book looks like it is awesome. Im into the suspense romance novels and I did the math for all the books and it is a total of 1434 pages. It is the longest book I have ever gotten. How cool!”  ~Hallie Trumbull, Amazon

Don’t miss the summer’s best collection of romantic suspense, mysteries and thrillers from masters of the genres!

Chasing Shadows by CJ Lyons
Going undercover, playing the part of a disgraced former Marine, is easy for Chase Westin–until a Christmas Eve mission takes him back to his hometown and face to face with his estranged brother. When KC, an undercover FBI agent, flies into Chase’s life with her Doc Martens, purple, punk-rock hair, and Hollywood-hype leather and chains, Chase realizes that falling in love is more dangerous than catching bullets.

Dirty by Debra Webb
Jackie Mercer can’t abide deception. A woman who single-handedly built the Mercer Detective Agency from the ground up has a right to expect honesty in a relationship. Tell that to the creep who, only this morning, she thought might be Mr. Right. Wrong! Her day only gets worse when an ominous message arrives accompanied by the photo of a man she hasn’t seen in ten years: You were the last one to see him alive. She’s in real trouble when a second message, this one including a dead body, drops into the mix. Jackie does what any smart Texas woman would do: she kicks butt and takes names, while the mystery spiraling around her long lost lover and her attraction to Derrick Dawson plunge her into a tangled web of shocking secrets and deadly deceptions.

Mind Reader by Vicki Hinze
Caron Chalmers is an empath. A mind reader cursed with imaging only victims. She sees what they see, feels what they feel, endures what they endure. But even with all the sensory perception and insights, sometimes she fails to save victims in time. Sometimes she interprets the signs wrong–and a year ago, she did exactly that. She messed up and a victim died. Caron nearly died with her. Her “gift” shut down. Now it’s back. There’s another victim–this time a child–and because of the shut-down, her police contact, though aware of her many successes, isn’t willing to stake his career on her. Yet he can’t dismiss her and calls in help from a private investigator, Parker Simms: a man with a past as bleak as Caron’s and a specific agenda of his own: proving Caron Chalmers is the fraud he believes her to be. In a hostile alliance, Caron and Parker seek the truth . . . and discover a labyrinth of lies and deceptions…

Witch Dance by Peggy Webb
Kate came to Witch Dance to practice medicine. She expected to fall in love with the tribal lands of Oklahoma and its people. She never expected resistance and hostility to her clinic. And she certainly never expected death threats. But something evil is stalking Kate and the Chickasaw children. Only one man can stop the deadly enemy – Eagle Mingo, son of the Chickasaw governor, destined by blood to follow in his father’s footsteps and by fate to fall in love with a forbidden woman. Eagle will do anything to save Kate except shun the traditions that hold him fast to duty. But can he stop the evil spreading through his land and find a killer who calls himself the Avenger? Can he find a way to have the woman of his heart without breaking the heart of a Chickasaw nation?

The Informant by VR Marks
A dead body is no way to start the day… a fake marriage makes it a special brand of hell.
When her witness is murdered, DEA Agent Hannah Thalberg knows she’s the next target. The only way she can stay close to the case is to lie about getting married and hope her one-time lover goes along with the deception.

My Favorite Corpse by Kathy Carmichael

My Favorite Corpse centers around Ashley Sands, the owner of a mystery-themed inn located on the Eastern Shore of Mobile Bay. An amateur sleuth, Ashley finds a corpse washed to shore at her inn’s private beach. She must learn what happened before her guests begin checking out. While Ashley’s mystery weekend guests usually enjoy the occasional dead body, they prefer the never-previously-animated kind.