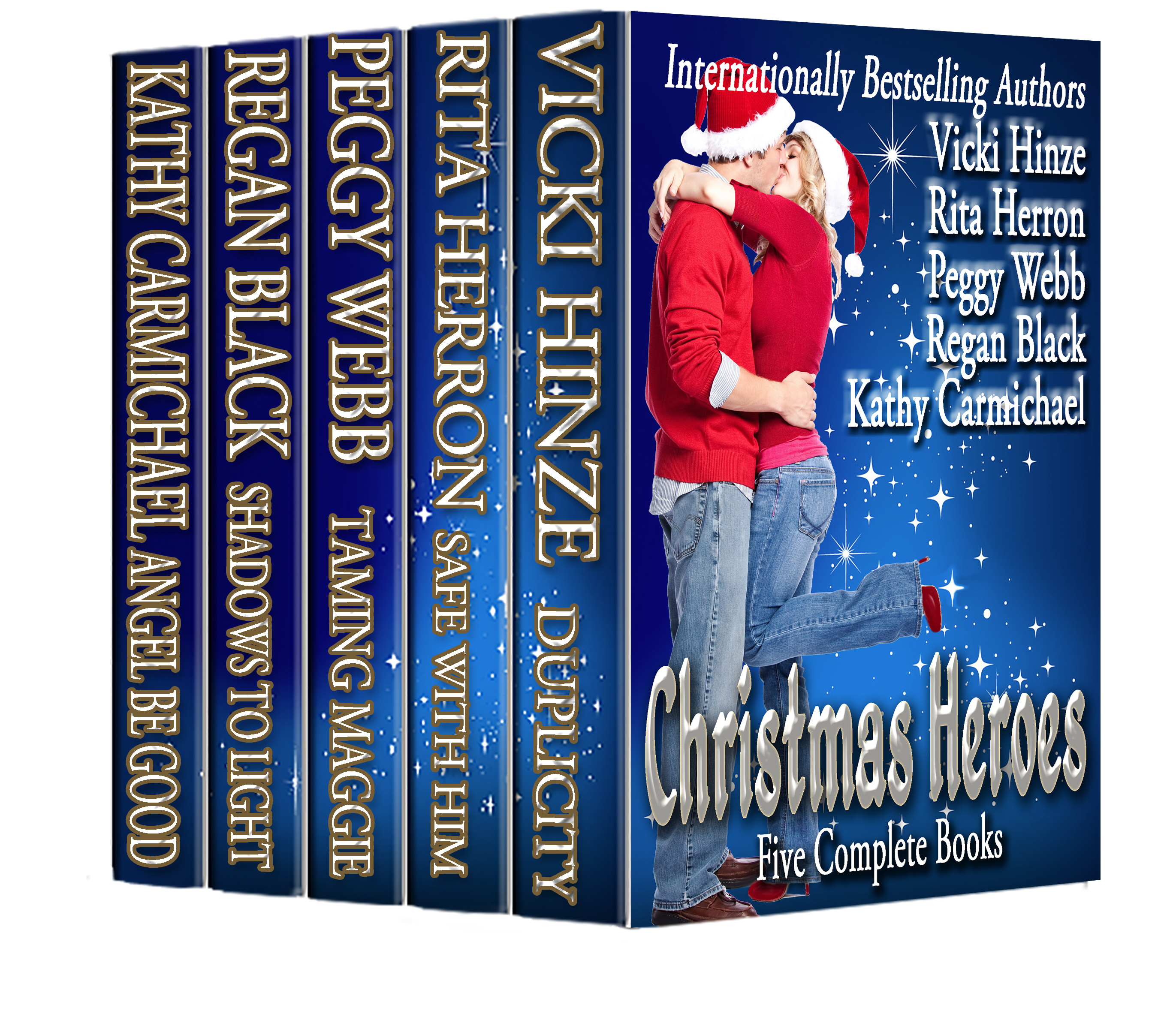 On Angel Be Good by Kathy Carmichael…

“A heartwarming and funny tale.”

With 5 unique Christmas-themed stories, including a mix of genres, Christmas Heroes is ideal for every stocking!

Career military attorney, Captain Tracy Keener is ordered to defend Captain Adam Burke, a Special Operations officer who caused the deaths of his entire team. Everyone knows he’s guilty and defending him will cost Tracy her career, but she has no choice.

Captain Burke swears he acted under orders. Swears things that can’t possibly be true: breaches requiring corruption at the highest levels, the deliberate sacrifice of an entire military team.

Under orders and then threats to drop the case and let Burke go down, Tracy and Adam are targeted for assassination. To their horror, they discover others too are marked for death. To succeed, Tracy and Adam must risk more than their lives–they must risk their hearts.

SAFE WITH HIM by Rita Herron

All Texas Ranger Sergeant Mitch Manning wanted was to drown his sorrows in a bottle. Then Kaylie and CeCe snuck into his abandoned ranch house, looking terrified and obviously on the run, and his detective instincts surged to life. But he’d lost one family because of his job, and he refused to make room for this woman and her little girl in his heart.

Still, he was a Texas Ranger and he would protect them or die trying…

It’s Christmas, and Maggie Merriweather had rather be naughty than nice.

When this feisty grade school teacher sets out to foil opening day of duck season, Maggie never expects to lock horns with Tupelo’s bad boy banker, Adam Trent, let alone feel the urge to rip his shirt off! Can she save the ducks without losing herself?

Adam vows to subdue the spirited crusader. But when a snowstorm strands them, he discovers he’d rather woo than subdue. Can two people whose principles are poles apart ever turn Christmas bells into wedding bells?

SHADOWS TO LIGHT by Regan Black

The year is 2096, and as part of a covert team searching for a missing government scientist, Jameson is tasked with staring at a laboratory building day in and day out during a cold Chicago December. The boredom is overwhelming until the one woman he cannot forget, shows up in a place she should never be.

A supernatural healer, Mira escapes a trial of her peers only to be sent on an impossible mission: Rescue her scientist father from a madman who’s using him to create bio-weapons. But she’s no spy. On her own, with no real clues, she isn’t sure where to turn.

Forced together by circumstance, Mira and Jameson enter an adventure that will push them to their limits – and quite possibly beyond.

ANGEL BE GOOD by Kathy Carmichael

Billionaire CEO Nat Danvers has good looks, money, power, prestige–everything–except the one thing he really needs. But only in the loneliest corners of his frozen heart is he aware something is missing. Christmas Eve arrives to find Nat alone in his penthouse office, filling out layoff notices while his employees unknowingly celebrate at the office holiday party. In breezes the most incredibly beautiful woman he’s ever seen. Daphne, part angel, part human, has been sent by the Angelic Council to teach Nat some tough lessons in the hope his hardened heart will melt. She has only one night in which to help him. With the clock ticking before she must go, can love find a way to touch them both?

A special Christmas Collection for the 2013 holiday season only.

Now out of print.