Why Vicki Hinze Wrote Deep Freeze in the Stormwatch Series 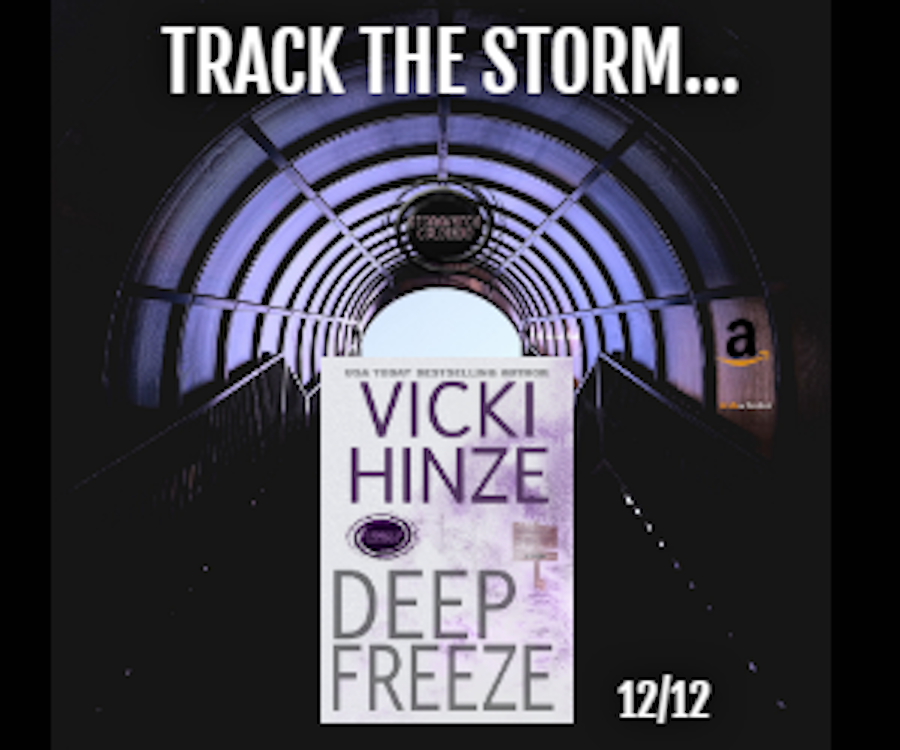 Ideas come from all over and often take a convoluted path, combining with other ideas that come to an author in odd ways.  These are the origins of DEEP FREEZE.  Disparate ideas that merged and blended into a chilling story.

It all began with a blue horse.  Well, a statue of one. 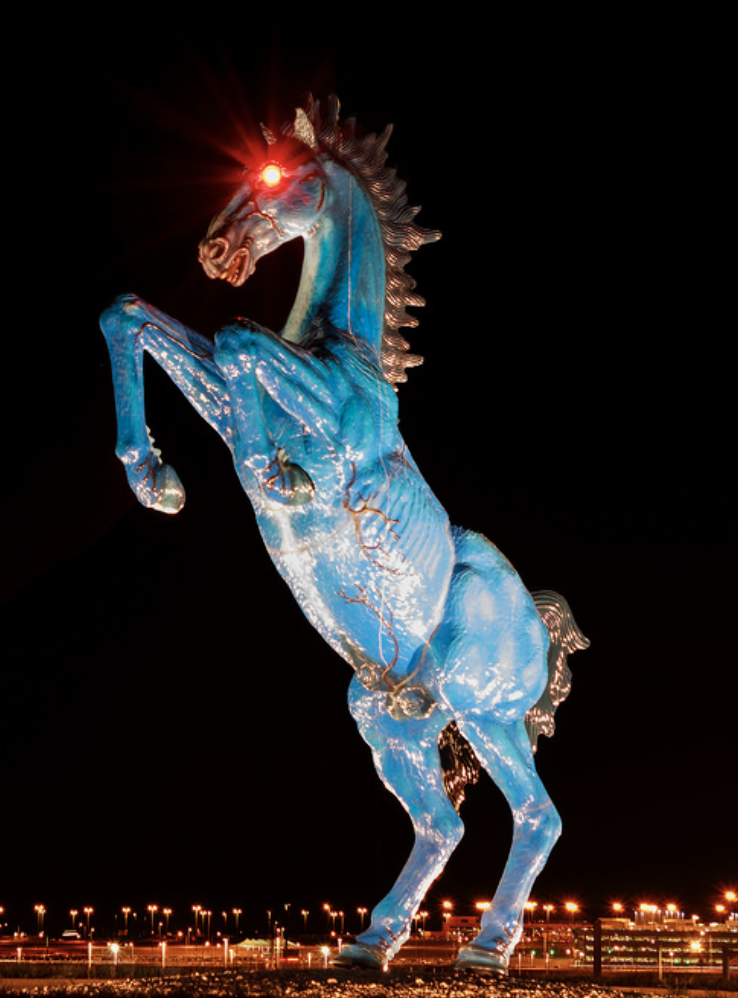 I was surfing the Internet a long time ago and a statue commissioned by the Denver airport snagged my attention.  The Blue Mustang, which is also known as “Blucifer,” was sculpted by Luis Jimenez.  There were delays and problems along the way.  Actually, Luis never saw the completed sculpture.  During the sculpting, part of the horse fell on Luis, crushed his leg and severed an artery.  He never saw the finished work. His sons took over and finished it.

The horse is often referred to as demonic due to its eye.  You can read more about it here.

Why, I wondered, would the Denver airport commission a red-eyed blue horse that people referred to as demonic?   Curiosity got the better of me and so I checked out the airport online. That’s when I discovered murals and more statues and a plethora of interesting fodder.

Search “underground Denver Airport.”  You’ll be amazed at all that comes up (including conspiracy theories which make for good stories).

I also discovered significant construction was going on in the airport.  That could make those in the airport really vulnerable in a storm.  Then I discovered all the tunnels under the airport.  Remember, the “Mile High City” is on a mountain.  Yet tunnels wind all over beneath it and there’s an arsenal nearby…

That all sounded promising for a thriller novel, and there certainly was a lot of potential for strong suspense—provided the arsenal wasn’t a wildlife refuge (which it is in real life now) and something else was at risk…during the worst storm in eighty years.

That’s when I happened upon the High-Containment Lab and a challenge that made it a disparate but viable candidate for that risk.  For years, political leaders were told repeatedly that scientists must safely store dangerous microbes (germs, contaminates) in high-security labs and they did receive assurances that was being done.  Then six vials of smallpox were “discovered” in a storeroom, on their sides with their cotton stoppers sticking out.  That caused a whale of a scare and proved the high-risk security was “flawed.”

That revelation on an issue that being over a half a century earlier was deemed “gobsmacking.”  After anthrax and 9/11, the administration insisted authorities track down an entire listing of “special pathogens.”

And when a lab was eyed as culpable in the anthrax mailing in 2001, we discovered dozens of dangerous pathogen samples were unaccounted for and record-keeping was at best “sloppy.”  The biologist tagged with the anthrax mailings committed suicide, and author of the book I Heard the Sirens Scream, spoke of an inability to provide reasonable biosecurity.  That haunted me.  As much as the suitcase radioactive bombs that went missing after the Soviet Union collapsed.

The research went far deeper and spread wider, and it was extremely interesting and terrifying, especially the manmade microbes that resided in freezers in universities.  One reconstructed a flu from 1918 that is estimated to have killed 60 million people in 18 months, according to one report.  We’re told they are confined and can’t escape, but we’ve heard that before. And that creating synthetics to gain function happens all the time in biology.  It has happened.  The Black Death (plague, 14th century) and the Justinian Plague (16th century) have been successfully sequenced and now they can swap gene sequences to see which is most dangerous and transmittable. Chilling, right?

And while chilled, I spotted an article that plague had shown up again on an island off the coast of Africa.  Madagascar, I believe it was.   The World Health Organisation was warning officials that 124 were dead and over 1300 infected; it would be a short time and it’d reach Africa.  Nine nations were at risk.  From Africa, it seemed logical that it would spread up and through Europe.  It’d happened before, hadn’t it?  And reportedly killed as much as sixty percent of the total population of Europe.

That took the chill down to my bones.  And then I remembered that arsenal near the Denver airport…  And those tunnels.  And the mountain itself.

Then came the challenges.  What nut would put a high-containment lab under an airport?

Today, not even a nut would.  But the lab being built inside a mountain, before there was an airport…?  That could work.  Lots of facilities are built inside mountains.  Cheyenne Mountain, NORAD (think Santa trackers!).

Having the lab predate the airport worked.  But when the airport was built, surely it’d be conditional on removing that top-secret lab…wouldn’t it?  Top-secret. But pathogens?  Surely that would have to be disclosed.  So the building of the airport, common sense insists, would be predicated on if not disclosing the lab, moving it.  So the lab’s slated to be moved.  Only a war happens.  And sequestration happens.  And planes to fight the war are robbing plane parts from the “boneyard” where planes no longer in service are sent to reside.  Money is the issue.  There isn’t any for a new facility or for the move.  One year slips to two then another.  We’re still at war.  Finally, the money is made available and the lab move is scheduled and then this horrific storm brews up and is going to hit.

That seemed a logical and reasonable sequence of events.  Yet another challenge remained…

I didn’t want people to read the book and be freaked out about Denver airport.  Especially since I was adding attributes to it that aren’t there—the high-containment lab and more.  I was born in Denver and I’ve flown into its airport.  It’s huge and busy and flying itself induces enough anxiety these days. So, I did what I consider a reasonable thing:  I created a fictional town, Portal, with a fictional airport.  Portal is based on aspects but cannot induce anxiety in real travelers because it doesn’t exist.

I then remembered that this novel was to be not a thriller but romantic suspense.  (Smiling as I write that.)  And that lab being inside the mountain gave it a great deal of protection from the elements.  A bit more vulnerability due to the construction, but still a lot of protection.  I needed a villain—a mobile villain.  A ruthless villain interested in obtaining the pathogens for the worst possible reason.  A reason, well… it scared my socks off and that’s a good thing in fiction.

By this time, there was no way I could not write the book.  I had to see how it all worked out.  How the other complications would resolve.  And who would resolve them.

A few readers have had an issue with the lab being under the airport.  Even the protagonist in the story took exception with that.  But the rationale worked for me then and does now.  Priorities exist, and there is only so much allocated, so compromises are made.  Happens all the time.

More readers are fascinated and chilled, just as I was, by the story.  I loved it.

You know that’s always been my one writing rule:  I won’t write a story I don’t love.  Deep Freeze was tested on that standard bar I’d set for myself decades ago, and it passed.  It contained elements of suspense, mystery and romance, it scared me half to death—which means the stakes were really high—and I loved it.  Still do, and I hope readers continue to love it, too. 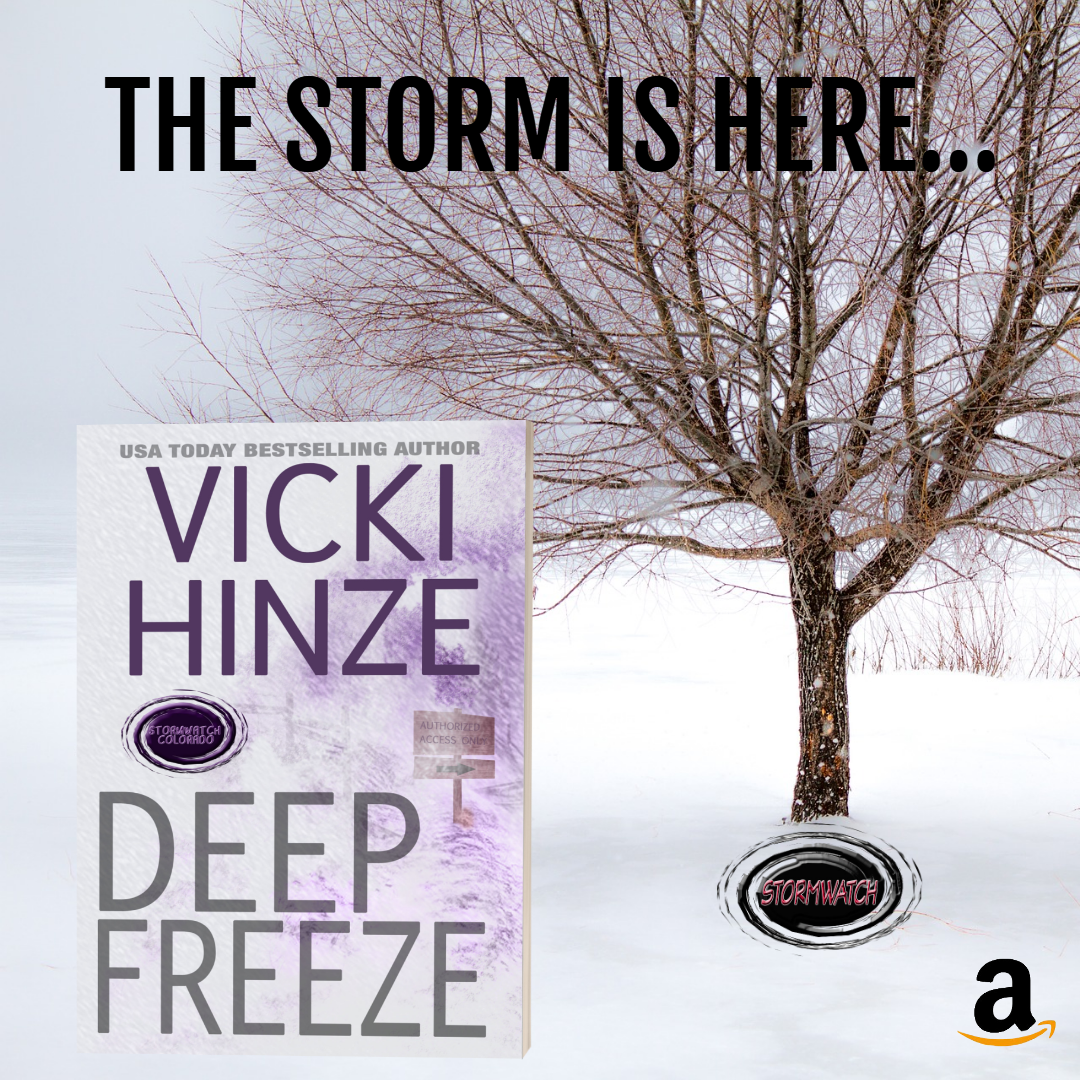 ← Previous Link: Prev: Trouble Finds Us All Next Link: Next: When Dreams Die--What Then? →

END_OF_DOCUMENT_TOKEN_TO_BE_REPLACED

END_OF_DOCUMENT_TOKEN_TO_BE_REPLACED
Manage Cookie Consent
To provide the best experiences, we use technologies like cookies to store and/or access device information. Consenting to these technologies will allow us to process data such as browsing behavior or unique IDs on this site. Not consenting or withdrawing consent, may adversely affect certain features and functions.
Manage options Manage services Manage vendors Read more about these purposes
View preferences
{title} {title} {title}