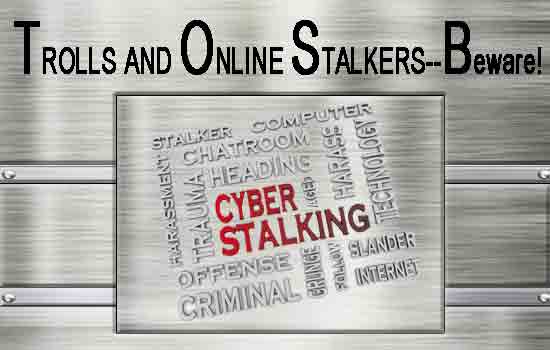 Writers get all kinds of messages from all kinds of people.  Ones who are lost, sad, broken-hearted; prisoners, criminals, victims; ones who are in crisis, losing loved ones, dying.

People read our books and feel they know us, and that we’ll understand their troubles. Many, we do. We either have a similar experience or for other reasons can relate.  Some, not so much.  Especially the ones who threaten, attempt to intimidate and silence us. And, of course, those who have in mind to create mischief in our lives.

Writers typically do what we can to help others in trouble or suffering. But for the trolls and stalkers and mischief-makers, you are likely making a common error:  mistaking kindess for weakness.  And that is why you might want to think twice before marking a writer as your victim to troll or stalk online.

You see, writers tend to have experienced a lot of different situations in life.  Those experiences create a foundation, give them a deep creative well to draw from in creating stories. They also research an array of topics and tend to know a bit about a lot of things.

Experience and knowledge, combined with the instincts one imploys in exposing the soul in the work, does not make for an easy mark.

Intimidation is even more difficult. Remember, a writer creates a cohesive, logical story peopled with characters from nothing. Every project started begins with a blank page.

Any writer who has faced the intimidation of a blank page… well, they’re apt to see trolls and online stalkers as amateurs.  You have to be really good—not just a novice, but an accomplished, seasoned pro—to even compete.  Don’t forget, writers don’t do this creating-something-from-nothing just once, but every time they write.

That’s intimidation on steroids, and they stare it in the eye and conquer it every single time they write.  Not a book, or a chapter, or even a page.  They conquer the intimidation with every word.

Now a book ranges from 40,000 to 120,000 words.  Imagine a writer who’s written many books. Do the math. See?  Lots of experience conquering attempted intimidation.

So you troll and post a nasty note, which proves you know nothing of the person you’re trolling and/or stalking online. And you expect that writer to shrivel into a ball and cower before you.  You’re surprised when the writer doesn’t. Confused and, yes, even a little angry.  You have no idea what’s wrong with that person.  Let me explain…

Remember what I said about writers and their experiences?  Well, let’s take a little look into that. Maybe you’ll better understand your intended victim.

Survived death threats for refusing to be racist.

Survived raising children with a spouse who deployed during crises—like hurricanes and floods.

It’s a longer list and I could go on, but you get the point.  That’s one writer, one life, and only a partial list.  Do you see the recurring theme? Survived.  It’s rare for any writer to not have a long list.  Do you see now why the bar is so high for you to intimidate them?  If there’s a challenge, they’ve faced it—often more than once—and every experience teaches survival and coping skills.

The point is, writing is not for wimps.  Wimps have nothing to say, nothing to write about.  So not many write. Those who do, well, it takes a lot to pierce their rhino hide.  Which is why, before you target one, seriously, slow down and rethink. Do you really want to go there?

The best you can hope for is to get your ears blistered, endure a visit by the police and/or the FBI, and to get buried under a heap of public humiliation. Because writers are tenacious, they push and keep pushing, and they prosecute. They also talk and warn other writers.  Truthfully, writers just don’t make the easiest victims. It’s not their nature.

My best advice?  Never mistake kindness for weakness.  Never assume because you don’t get a rise out of someone, it’s because they’re cowering somewhere. It’s equally likely they’re bored.

Or taking action.  That means, if you elect to troll or stalk online, you’re likely going to meet with unexpected twists in events, with people you never expected to meet, and to encounter other unpleasant surprises that will result in consequential outcomes for you that you won’t much like. Online stalking is a crime. (Imagine yourself in handcuffs here.)  Writers are tenacious, remember? They push and prosecute.

Best to just rethink your plan and make wiser choices.  Find a more constructive outlet for your time and energy.  One that will produce good things that lift you up and enrich your life.  Choose to become a hero or a heroine instead of a would-be villain.

Writers notice these things and, who knows, maybe you’ll be the inspiration for one’s next book.

← Previous Link: Prev: A Gift Before Departing Next Link: Next: Spilling Secrets and Breaking Confidences →

END_OF_DOCUMENT_TOKEN_TO_BE_REPLACED

END_OF_DOCUMENT_TOKEN_TO_BE_REPLACED
Manage Cookie Consent
To provide the best experiences, we use technologies like cookies to store and/or access device information. Consenting to these technologies will allow us to process data such as browsing behavior or unique IDs on this site. Not consenting or withdrawing consent, may adversely affect certain features and functions.
Manage options Manage services Manage vendors Read more about these purposes
View preferences
{title} {title} {title}