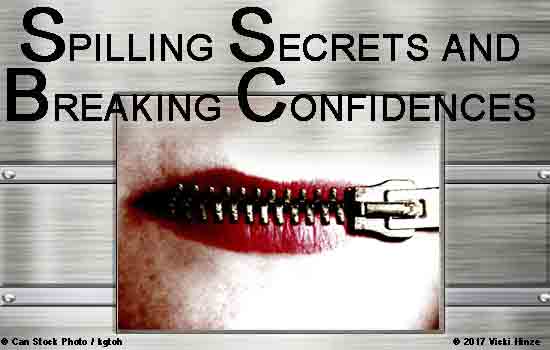 Many decide the trusted confidant betrayed them and just can’t be trusted. And the confidant might have, but it’s equally likely the revelation came about in an attempt to defend and protect and not to harm. Yes, the confidant did the wrong thing, but for the right reason.

While wrong is wrong, it is easier to understand and react with compassion when you know the wrong was to protect and defend and not to do harm. It changes the way we see the offense and the person who committed it.

That’s one reason determining the why of these issues matter. Here are a few others:

COMMON REASONS SECRETS ARE SPILLED AND CONFIDENCES ARE BROKEN

1.  The secret scares the socks off the confidant. That fear ignites an internal war. Should s/he do something? Try to intervene in some way to protect or avoid a catastrophe?

Knowing the secret and what could happen as a result of it instills and feeds fear that nags mercilessly. If the confidant doesn’t act and things go sour, then s/he suffers relentless guilt. Who wants to be responsible for harm, loss, or worse because s/he didn’t speak up or stand up or act? The confidant is typically a friend, and s/he wants his or her friend—namely the person who shared the secret—to be safe and not in danger or in trouble. To avoid a costly mistake that could hurt for the rest of his or her life.

That obvious absence of nefarious motives doesn’t make spilling secrets or breaking confidences right. It does make the confidant’s reason for doing it more human. We better understand the action. And there is a distinction between being betrayed and breaking a confidence out of a heartfelt desire to protect and keep someone safe.

While you might not agree with the action, and you’d would prefer your decisions about your life be left to your judgment, you can relate to the need in the confidant to share a secret in seeking advice from someone s/he trusts to gain reassurance s/he is making the right decision to stay mum or to speak up.

Imagine your secret is that you’re being abused. You tell the confidant. S/he does nothing. Later, you’re murdered by your abuser. So you’re dead and your confidant is choking on guilt and regret for the rest of his or her life because s/he knew you were at risk and didn’t do something to protect you and prevent your murder.

The agony of wishing s/he had said something will be merciless and relentless. And until that confidant’s last breath, he or she will live knowing if s/he had said or done something—anything—you might still be alive.  That’s a heavy burden to bear.

2.  The secret is so juicy that the person simply can’t hold it inside. Either s/he is so happy or sad for you, or so emotionally moved that the temptation to not keep the news to him or herself is more than s/he can manage.  Maybe having the inside scoop elevates the confidant in his/her group. Makes him/her feel special, privileged, significant because of what s/he knows.

That doesn’t make sharing right and it is betrayal. You don’t elevate yourself at someone else’s expense. Ever. It doesn’t matter whether the elevation is real or imagined, just don’t do it. Why? Because the truth is, you can’t do it. No one ever truly elevates if to do it they tear someone else down.

An insight on this person—the one you’re tempted to spill the secret to:    If s/he is a person of character and integrity (and why would anyone risk telling someone they didn’t think was) s/he will refuse to let you tell him or her someone else’s secret.

Why would a person of character and integrity refuse to listen to a third-party’s secret?  Because if you’re willing to break someone else’s trust, you’ll break their trust.  Secrets can be a heavy burden with long-lasting consequences. They don’t want the responsibility or the risks of guilt and regret.  They know if the person the secret is about wanted them to know, then s/he would have told them. It’s disrespectful to ignore that, or to gossip behind someone’s back.

The attempt to tell this third party someone else’s secret says more about you, the confidant, than it does about the owner of the secret or about the third-party. It warns the third party that you can’t be trusted with a secret, and that generally means you can’t be trusted at all. So that you’d be willing to break a confidence puts the third party on notice.  Trust at your own risk. Privacy is not and likely will not be respected.  Is that a message you want to convey about your character?

3.  The secret shared is relegated to memory and the confidant simply forgets that it was a secret.

We all are told tons of things by tons of people everyday and, during the course of a conversation, something we were told earlier—months or even years ago—can just slip out in conversation.  Sometimes we never recall it was said in confidence. Sometimes we recall that fact the moment after we share. Either way, we’ve blown the confidence.

We blew it, we know we blew it, and it is blown. Done is done and while we might regret it, there is absolutely nothing we can do to take the breach back. We must live with it—and live with the fallout from it.

I had an aunt who was a star student at these slips. I adored her, and if I heard her say once, I heard her say a thousand times, “Don’t tell me anything you don’t want repeated. I can’t keep secrets. I just can’t do it.”

Some faulted her for saying that. I considered it admirable that she recognized her limitations and put everyone else on advanced notice.  She had a reputation for never telling a lie also, so when she said what she said, everyone knew the odds were good it was accurate.

THE INSIDE SCOOP ON SECRETS

The simple truth is that secrets burn holes in brains and bellies and beg to be shared. The only way to diminish the risks of your secrets being exposed is to keep them to yourself. Even that offers no guarantee, but it is the one thing you can control: access to that information coming from you.

Many pride themselves on never betraying confidences, on keeping their word, and largely honorable people do try to do that. But people make mistakes. They’re human. They don’t always deliberately break their word (though some do, but they’re rarely the type you’d tell a secret in the first place).  Slips occur. Not always to betray but sometimes to protect, to guard, to make someone else aware they’re stepping on toes—or they are about to step on toes and you’re warning them off. And sometimes we just, bluntly put, mess up.

Breaking confidences never goes down well. It’s rarely appreciated and even more rarely does an apology cure the resulting challenges. Understanding why it happened can sometimes lessen the sting, but it doesn’t always. Still everyone must accept responsibility for their actions—ones made deliberately or in error—and one must do all s/he can to resolve any problems s/he created.

THE LESSON TO US ALL

The lesson in this risky business of secrets and confidences is to share what you will knowing the risks. If you’re determined that your secret stay a secret, don’t share it. If you must share it, limit sharing to a priest, minister or spiritual advisor, or a licensed therapist. While that still doesn’t insure against slips, it’s the best you can do.

← Previous Link: Prev: Trolls and Online Stalkers--Beware! Next Link: Next: What is a Book Snip? →

END_OF_DOCUMENT_TOKEN_TO_BE_REPLACED

END_OF_DOCUMENT_TOKEN_TO_BE_REPLACED
Manage Cookie Consent
To provide the best experiences, we use technologies like cookies to store and/or access device information. Consenting to these technologies will allow us to process data such as browsing behavior or unique IDs on this site. Not consenting or withdrawing consent, may adversely affect certain features and functions.
Manage options Manage services Manage vendors Read more about these purposes
View preferences
{title} {title} {title}