The Wisdom in a Graceful Exit 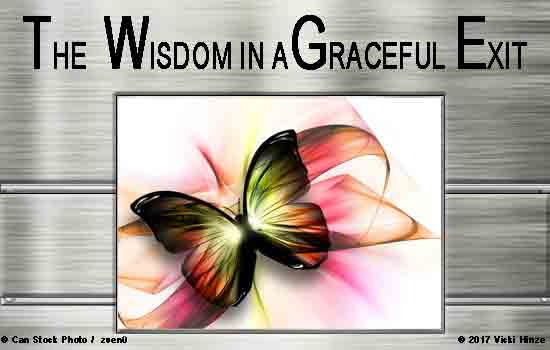 The Wisdom of a Graceful Exit

There is an art to life and to business. We don’t always think of either in those terms, but we should. When we remember or discover the art to life and business and work within its confines, we usually find that things flow more smoothly—which means, we experience less trauma and drama. Who among us doesn’t appreciate life and/or work with less trauma or drama?

1. Ignore the infraction. Typically, this isn’t a good idea because infractions nearly always cause challenges that, if ignored, become bigger problems. Still, there are those who hate upset and discord so much they’d rather deal with huge problems than to address infractions. They play ostrich, sticking their heads in the sand, until they just can’t do it anymore. Then they pay attention because they’ve exhausted all other options.

2. Proceed on as if the infraction had not been committed, seethe and stew about it, but not say a word. Some internalize their outrage but for a variety of reasons find it more palatable to pretend nothing has happened than to deal with what’s happened.

Rather than ignore, they silently seethe which magnifies the infraction to mamoth proportions. Some never realize the impact this has on their own sense of well being, their health, or their attitude. But the impact can vary from ulcers to resentment, and however it manifests, the outcome is never good. Long-term resentment often rides shotgun to the other physical and emotional ailments.

3. Acknowledge the infraction to oneself and others but not address it with the offender who committed the infraction. In this case, bad goes to worse. One doesn’t ignore or pretend, one complains to others who are not the offender.

Not addressing the problem with the offender but discussing it with others is, bluntly put, gossiping, and whether you’re sharing or hearing gossip shared, the result is negative.

Think of it like you would a secret. A secret is a burden to bear. If I tell you a secret, then you have to carry it—whether or not you want to carry it. And you have to carry it knowing that if I’d gossip to you it’s likely I’d gossip about you. If you listen to gossip, you’re likely to gossip about me, too. I can’t know that you wouldn’t, but I would know that if I offended you, even unintentionally, you might never tell me, just hold it against me.

Do you see how this resolution actually complicates your other relationships and solves nothing? The reason is simple. It’s a breach of trust. In this case, the trust is in giving another the benefit of doubt, of seeking peaceful conflict resolution, in being fair to others, and in being honest. The person you gossip with must wonder if you had an issue with them, would you have the courtesy to tell them? Or would you tell everyone else but them? That definitely undermines trust with that person—and with whomever they choose to share what you tell him or her, which colors those persons perception of you and your trustworthiness also.

4. Confront the offender, insisting s/he acknowledge the infraction and your awareness of it. While you want to clear the air, you don’t want to nuke it. Put someone on the defensive and you’ve opened a whole new can of worms that you’ll be sorting through every time you deal with that person.

While there is benefit in talking to the offender and letting them know you’re aware (and not clueless), confrontation isn’t the path to peaceful conflict resolution. When you make someone—even someone who might deserve it for their actions—feel badly, the odds are strong that you won’t have productive interactions with them in this current situation or in future situations. We tend to avoid those who make us feel badly about ourselves, and to shun those who flaunt our sins to us or to others.

5. Confront the offender and insist that s/he correct any challenges created and make restitution for the infraction. Again, watch the confrontation aspect of this. You want the offender in a receptive mood and not a defensive mood. And we all know you get better results when you inform and ask than when you insist or demand. There’s something about demands that immediately raise our hackles. That isn’t a friendly environment for conflict resolution or for resolving anything.

The problem with all of these responses—any of which might be just the ticket in a specific situation with specific individuals—is that none of them actually address the issue of a solution. Resolving the challenge or the conflicts created by it. And that is what we want in an end result: a solution. So let’s look at that.

How you react in a given situation to a given individual largely depends on your relationship with that offender. If s/he is someone you know and like, you’re more apt to be gentle, less offended by a wrong, and more forgiving. The more you like the person, the more leeway you tend to give them. The easier it is for you to tag a “wrong” as an “innocent mistake.”

You might still confront the offender, but it generally isn’t a heated confrontation. You don’t go in loaded for bear with guns blazing. You go in and communicate the offense and give the offender the opportunity to explain and to correct the challenges on his or her own.

In other words, you appeal to rather than accuse the offender. You relate an awareness of the infraction, inform him/her of challenges created, and give him or her a chance to offer solutions. You might suggest solutions and request input on the strongest course of action to solve the challenges. Do you see how that removes the heat from the person and places the heat on a workable solution to resolve the challenge?

That’s a graceful exit. And at some point in time, we all need a graceful exit because we’re all human and we all mess up and create challenges for ourselves and others.

It is important to right wrongs and correct challenges generated by infractions before they blossom into mammoth problems. Once a challenge is identified, switch focus to the solution. Beating the problem to death doesn’t solve it. Solutions do.

When you seek solutions and provide a graceful exit, you set the foundation for building trust and good relationships that extend beyond the current challenge.

If you treat the person with dignity and grace now, then going forward, that person knows from experience to expect dignity and grace from you and usually s/he extends those same things to you. There’s no doubt you’re not out to fry him or her. You’re fair and reasonable. You’re not interested in revenge or getting a pound of his or her flesh for messing up. You just want to fix the problems.

Giving someone a graceful exit often costs you nothing. But it generates a lot of good will. The other person doesn’t have to feel defensive or inferior. Doesn’t have to resent being on the hot-seat or called down. S/he expects to be held responsible and accountable for his/her actions. But s/he also has the right to expect to be treated with dignity.

A little dignity and respect goes a long way in forging and maintaining bonds.

Difficult situations find us all. When we can see beyond any upset and grasp the benefits of giving others a graceful exit, we see that the provision serves as a moment of grace for us, too. 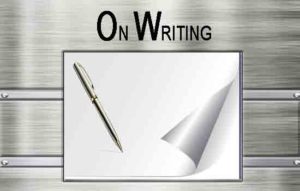 END_OF_DOCUMENT_TOKEN_TO_BE_REPLACED

END_OF_DOCUMENT_TOKEN_TO_BE_REPLACED
Manage Cookie Consent
To provide the best experiences, we use technologies like cookies to store and/or access device information. Consenting to these technologies will allow us to process data such as browsing behavior or unique IDs on this site. Not consenting or withdrawing consent, may adversely affect certain features and functions.
Manage options Manage services Manage vendors Read more about these purposes
View preferences
{title} {title} {title}