Stepping Back: The Upside of an Injury

Nearly 5 weeks ago, I sat at my desk as I usually do, and the phone rang. Now the phone is behind me when I am at my desk, so I turned around for it, had a short conversation, and then rather than swiveling in my seat to put the phone back on its charger, I just stretched back. Something in my shoulder pulled. Pain surged through the shoulder and rolled down my arm in waves. The pain was excruciating. Within seconds, I was in a cold sweat and I dropped the phone. So began this little, seemingly insignificant incident that forced a step back.

With that small motion during a routine task, I set off a chain of events that has impacted my life in ways large and small—and apparently will continue to impact it for at least the next three weeks.

At the time, I knew I was hurt. Three days later, I realized something was seriously wrong. My shoulder and right arm throbbed continuiously and I couldn’t lift even a coffee cup. I saw my regular doctor, who sent me to get x-rays and scans and referred me to an orthopedic specialist. After a healthy shot in the shoulder, the orthopedist referred me to physical therapy.

When you have a heavy schedule and a high-octane life, and you are suddenly sidelined and incapable of doing anything you normally do, it impacts you physically and also your mood. I tried to keep a positive attitude and my grouchiness at bay by reading inspiring quotes, and essays that focused on the beautiful things in the world. That did help, but as the pain persisted and the weeks wore on, the attitude challenge became more demanding. And then I received an email…

The instructions were to look closely at one photograph. (I give full credit to whoever took it; that wasn’t disclosed to me, but to grasp the lesson I learned in this I must include it.) This is the first photograph: 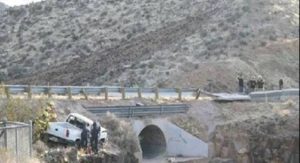 The story goes, that the white truck was traveling from left to right on the road. It broke through the guard rail, flipped and kept flipping, right over the culvert and came to rest where you see it parked.

What a blessing it seemed that the truck had flipped and landed as it did so that the driver was safe. Likely rattled to the core—who wouldn’t be?—but uninjured.

I took one look at it and gasped. That driver hadn’t just experienced a blessing but a blessing and a miracle!

And then I read the words below the second photograph:

Now flipping a truck and escaping certain death is a lot more dramatic than stretching to put a phone on its charger, but the lesson can be the same.

My whole attitude about being sidelined changed. And that’s made all the difference.

I’ve looked at these two photos often in the last few weeks, and will I’m sure in the next few weeks. And when I do, I think of all of the things I did routinely and took for granted. I think of all the therapy and work by the therapists, and the things I am able to do today I was unable to do right after the injury. And I think about how grateful I am healing is possible.

It’s easy to get discouraged when sidelined, or when things don’t go the way we want them to go. We don’t always know why they happen, though sometimes the reason becomes clear later. And the point, I guess, is that whether or not we ever understand why isn’t important. What is important is to not take the routine for granted. To be grateful and count your blessings.

In every life there are many cliffs, and many close calls. Some we see and recognize, but some escape our notice or are beyond our notice. Just as one can’t know the number of lives saved by taking a preventative measure, one can’t know what didn’t happen because something we perceive as being a bad thing did happen. It just might be that that bad thing was a very good thing—like the truck flipping over the culvert and not down that cliff.

And that brings us to the bottom line. The lesson isn’t just if God isn’t done with you, then God isn’t done with you, though that’s one offered. The lesson is also if you’re on the wrong path, or the “less than stellar path” that God has planned for you, He can and will sideline you to give you time to reflect and realize you’re on the wrong path or that “less than stellar” path.

Which sums up nicely an encouraging, mood elevating “secret weapon” that helps keep perspective balanced. It’s waiting for us in the simple verse:

While the next few weeks will have their challenges, I will focus not on what I can’t do, on impatience or frustration, but on the gems being shown to me.

The gifts in those gems are doubtless ones I can carry with me not just during the trials but for the rest of my life. I’m going to seek them. Embrace them. And implement them.

And when I forget, I’m going to reread this article and be reminded. I think there might just be another lesson or two hiding, waiting for me to find them.

“The ICE workbook is something we all should have ready for our families! The author has included everything you might possibly need to have ready in an emergency. When I was paging through it, I realized how little I know of what goes on in our home. It certainly is time to change that and be prepared – just In Case of Emergency.”  ~Betti Mace

← Previous Link: Prev: Special Sale on Not This Time Next Link: Next: Penny Thoughts →

END_OF_DOCUMENT_TOKEN_TO_BE_REPLACED

END_OF_DOCUMENT_TOKEN_TO_BE_REPLACED
Manage Cookie Consent
To provide the best experiences, we use technologies like cookies to store and/or access device information. Consenting to these technologies will allow us to process data such as browsing behavior or unique IDs on this site. Not consenting or withdrawing consent, may adversely affect certain features and functions.
Manage options Manage services Manage vendors Read more about these purposes
View preferences
{title} {title} {title}