Politically (in)Correct: It Is What It Is 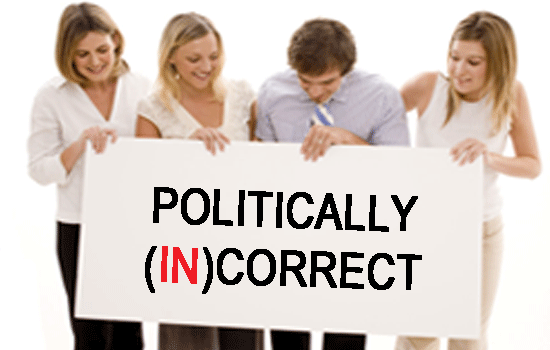 Politically (in)Correct:  It Is What It Is

Politically correct. We’ve been lectured on it, taken to task, borne accusations and been confused by it. It’s been used as a weapon against us, intended to nudge us into accepting what others want us to think, feel, and instructing us on how we’re to act.

In the beginning, many attempted to conform because they didn’t want to seem crass or tacky or unenlightened. They wanted to be accepted, respected, and to come across to others that they were sensitive, aware, and didn’t wish or intend to intentionally offend.

What’s happened however is that being politically correct has gone too far. What began as sensitivity became a sword to manipulate, and along the way, the obvious, the evident, and the logical strained, and the truth got muddy and then obscure. Common sense flew out the window and then departed altogether. The proof of this is all around us. 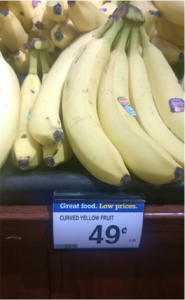 On Facebook, I visited a page and saw a photo (credit is given to original poster [unknown]). Notice, if you will, the tag, “Curved Yellow Fruit.” 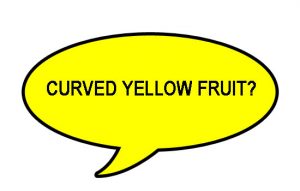 As a writer, I can’t help but love words. Words carry express meaning. They evoke emotion, provide clarity, are a means by which we communicate—understand and are understood. But when I see things such as this—where we can’t call a banana a banana—I worry about us. We’re destroying our tools to effectively communicate, to understand and making it impossible to be understood.

How many times have we heard and uttered, “Say what you mean, and mean what you say?” Many times—and not just during election cycles, but in everyday life. We say it, we hear it, we feel it. It grounds us, makes our positions clear. It sets our expectations; when others say it, we know what to expect. But what are we to make of curved yellow fruit?

I’ve never claimed to be politically correct. I don’t deliberately hurt others and I try to be sensitive, but I just don’t have the patience or see the sense in dancing around something with euphemisms or gangly phrases. A banana is a banana. Whatever something is, it is. Recognizing and accepting that fact is the shortest and surest route to truth and it doesn’t leave open for interpretation a lot of nonsense that causes confusion and misunderstandings that then require a ton of work to clear up.

If we believe that all things and everyone deserves respect, and we speak and act accordingly, then there’s no need to burden ourselves with the politically correct.

Its positive attributes are inherent naturally. And its negative attributes, we don’t want to embrace anyway. (That would be the weapon, manipulation, nudging aspects that stomp on our choices and put our choices in the hands of others who think they know better than we what is best for us.)

Driven to excess, most things head over the cliff leaving sense and logic and clarity behind in the dust. Politically correct clearly is among them.

Splat! That was it, hitting bottom beneath the cliff and landing right beside the curved yellow fruit.

Note:  Republished by request (Sorry for the delay. Took me a time to find it in the articles file!)

← Previous Link: Prev: Integrity: It's Like Being a Little Bit Pregnant Next Link: Next: Safety Tips for Halloween →

END_OF_DOCUMENT_TOKEN_TO_BE_REPLACED

END_OF_DOCUMENT_TOKEN_TO_BE_REPLACED
Manage Cookie Consent
To provide the best experiences, we use technologies like cookies to store and/or access device information. Consenting to these technologies will allow us to process data such as browsing behavior or unique IDs on this site. Not consenting or withdrawing consent, may adversely affect certain features and functions.
Manage options Manage services Manage vendors Read more about these purposes
View preferences
{title} {title} {title}