New Book Alert! Down and Dead in Dixie

It’s Release Day!  I’m so pleased to announce the first book in my Down and Dead, Inc. series, Down and Dead in Dixie! 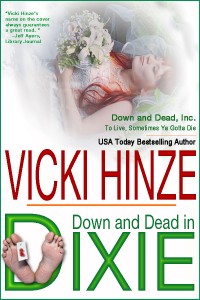 To live, sometimes ya gotta die! Daisy Grant is in a heap of trouble. She stumbles into a mob turf war and now somebody wants her dead. Daisy may be small-town to the bone, not at all the kind of woman to deal with the Southern Mafia, but she knows how to get creative fast!

Enters the way-too-attractive Mark Jensen… He didn’t mean to rescue anybody, and he certainly didn’t mean to go on the run because of a stubborn, sassy woman. Soon they are up to their ears in so many wacky characters they don’t know who’s on their side. Daisy and Mark decide that to live, sometimes ya gotta die. And sometimes to die right takes . . . practice.

A little feedback on Dixie:

Kay Hooper , New York Times bestselling author, (on Not This Time)
“I know I can always count on Vicki for an absorbing story I’ll remember long after I’ve closed the book.”

Peggy Webb, USA Today bestselling author
“Move over Janet Evanovich! Vicki Hinze is romping through Dixie’s criminal underbelly, and she’s bringing the sassiest heroine since Stephanie Plum. Down and Dead in Dixie is a rip-roaring page-turner that delivers laughs, fantastic characters and twists galore. This one is a must read!”

Dixie is available in print and digital (Audio won’t be out until later in the year) at Amazon and Barnes & Noble.  Will be available shortly at Deeper Shopping, iTunes and Kobo.  Trade Paperback is available at Amazon. (Other retailers coming.)

I hope you have half as much fun reading Down and Dead in Dixie as I did in writing it.  These characters cracked me up.

← Previous Link: Prev: Some Things are Worth Waiting For Next Link: Next: Death and Grief →

END_OF_DOCUMENT_TOKEN_TO_BE_REPLACED

END_OF_DOCUMENT_TOKEN_TO_BE_REPLACED
Manage Cookie Consent
To provide the best experiences, we use technologies like cookies to store and/or access device information. Consenting to these technologies will allow us to process data such as browsing behavior or unique IDs on this site. Not consenting or withdrawing consent, may adversely affect certain features and functions.
Manage options Manage services Manage vendors Read more about these purposes
View preferences
{title} {title} {title}