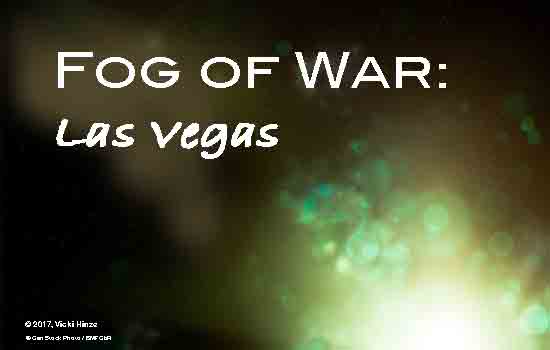 Like most, I’ve never been in a war zone. I have had loved ones—at times, two members of my immediate family—in a war zone. The things the mind does to you during that time is merciless. The constant fear for your loved ones, the edgy nerves that cause you to jump every time the phone or doorbell rings. The inability to focus on other things… it never stops.

During the Las Vegas Massacre, through video and personal accounts, many of us glimpsed what it’s like to actually be in a war zone. And while we never want to be there or glimpse such an atrocity again, the experience does grant us an opportunity to gain some insights that offer us clarity. With it comes empathy and compassion and, yes, outrage at the horror inflicted and lives torn apart and forever altered. We witness man’s inhumanity to man.

We also witnessed the worst and best in us. A person on Twitter condensed the video of the real-time discussion between command and the officers on the ground wearing bodycams. The footage was up-close, in your face, and horrific. People running, screaming, diving for cover, unsure of where to go that was safe, tripping over bodies and people stooped and bent, trying to save the lives of those fallen. Pandemonium reigned chaos. Terror and shock: a war zone.

I watched the video three times. Not because I’m fond of seeing terrorized people in crisis, but because I had to work beyond my own emotional reaction to  witness the fog of war. Events were unfolding at such a rapid pace it was impossible to digest and absorb so much sensory input at once.

Repetition permitted emotional distance, and it became more and more evident to me why the fog cannot be avoided, and why it is the birthplace of conspiracy theories.

An officer gets to a specific gate and sees bloody people. He radios in an active shooter. It’s logical. Reasonable. But there was no active shooter at that location. The officer didn’t lie. He reported an educationed, logical deduction based on his perception and experience. Wounded and bleeding people means someone had to shoot them. Those listening to his report made deductions based on their experience and perception of his report. If the officer radioed in an active shooter, then there was an active shooter present, evidenced by blood-soaked victims. Literally. Again. No one lied. They just perceived their observations based on their experience and knowledge and natural deductions. That birthed the multiple shooters theory.

Victims scattered.  Similar reports occurred in a variety of locations both inside and outside the hotel. All people were acting in good faith and deducing the reality of events they were encountering by engaging their own perceptions—what they were seeing, hearing, thinking, and feeling. We all process our perceptions differently but in ways normal to us. And when we do, our perceptions stick firmly in our minds. That forms our perception, and our perception is our truth.

It’s been a few days now since the terrorist attack occurred. Some conspiracy theories born that night in the fog of war have been examined, explained and put to rest. One that persists is that there was a second shooter firing from the 4th floor, below the known shooter on the 32nd floor.

Why has it persisted? Let’s take a closer look…

The first video I viewed connected to this theory showed huge plumes of roiling smoke at the windows on both the 32nd and the 4th floors. But there were differences. The smoke above lingered. The 32nd floor window was shattered. The smoke on the 4th floor did not linger and the window was not broken. That dispelled a second shooter on the 4th floor firing upon the crowd, yet word that the 2nd shooter had been proven beyond doubt continued to spread. People witnessed, perceived and believed there was a second shooter there.

Then came word that the fire alarm had gone off on the 32nd floor. The smoke generated from all the firing triggered it. And that fire alarm resulted in strobe lights going off in guest rooms—a safety feature to warn hearing-impaired guests. With open draperies in the room on the 4th floor, the strobe lights could be seen from the ground. A guy who worked across the street said he’d seen this strobe light occurrence happen before. When the strobe-light factor was later reported, for many, it solved the mystery of the 4th floor.

But it didn’t resolve the perceptions for all. For some people, the 2nd shooter theory on the 4th floor persisted. Eventually, the media noted that two buildings across the street had mirror-type facades. Some deemed the 4th floor smoke and firing perceived from the ground and on video a reflection of the 32nd floor firings. The image on the 32nd floor had reflected off the mirrored façade of the building across the street and shone back onto the 4th floor. No broken windows on the 4th floor supported that deduction, and the reflection explanation sufficed for some—yet not fully for others.

Yet another speculative theory surfaced. Camera distortion. The lense of the camera taking the photographs, making the video, distorted the image and made the 32nd floor firing also appear below on the 4th floor.

The 4th floor 2nd shooter was a microcosm of a single event experienced by many people who witnessed it and drew different conclusions. All earnestly seeking the truth, all acting in good faith. All seeking a logical explanation for the discrepancies between what they perceived and deduced and what they were being told by others.

In 1928, Arthur Ponsonby’s wrote: ‘When war is declared, truth is the first casualty’. That quote came to mind and stayed. Yet these untruths were not intentional deceptions or misdirections or manipulations. The truth casualties were a direct result of conflicts in perceptions and deductions. Knowing that made it easy to understand why eye-witness accounts aren’t always accurate or reliable or absolute.

This one segment of the larger event showed us how, say, five people can witness the exact same thing at the exact same time and see totally different things. Each person, in his or her own mind, deems specific details of all available details important. And those selected details deemed important claim his or her focus. It is on those specific and important details that the individual makes his or her deductions and perceives the whole segment that becomes his or her truth.

This event made clear the reason it takes time to sort through and study evidence. The reason why we cannot immediately get firm answers and know what happened. Why it’s imperative that hard evidence and logic be applied to every single assertion and be reasoned through and proven or disproven. Distance from high anxiety and heated emotion is essential. Taking the time necessary to appropriately process is wise and critical. Only with this reasoned process in place can one have confidence that what is presented as fact is fact.

If an authority asserts a fact, it must be accurate. If not, then every assertion made is riddled with doubt. Avoiding the creation of doubt—getting it right—is vital. That, bluntly put, takes time and multiple reviews by many sets of knowledgable eyes.

Long ago, I was warned: In a crisis, doubt all news for the first forty-eight hours. Now, I know why—in ways that before this event I could have been told but never would have fully grasped. Experience teaches.

In ways, this event both proved and cleared the fog of war.

Note:  The latest Shadow Watcher novel, The Marked Star, typically $4.99 is on sale for $1.99 at Amazon.com, Kindle edition. Limited time only.

END_OF_DOCUMENT_TOKEN_TO_BE_REPLACED

END_OF_DOCUMENT_TOKEN_TO_BE_REPLACED
Manage Cookie Consent
To provide the best experiences, we use technologies like cookies to store and/or access device information. Consenting to these technologies will allow us to process data such as browsing behavior or unique IDs on this site. Not consenting or withdrawing consent, may adversely affect certain features and functions.
Manage options Manage services Manage vendors Read more about these purposes
View preferences
{title} {title} {title}