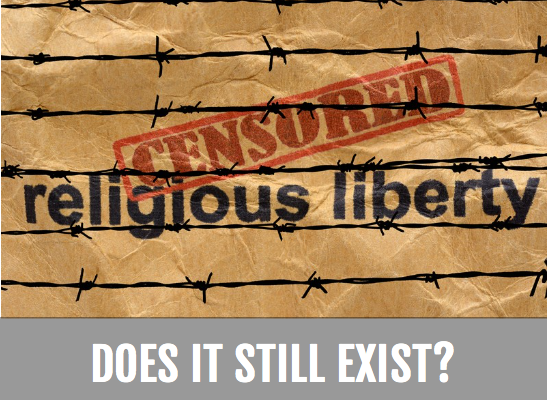 WHY CHRISTIANS CAN’T SIT THIS ONE OUT

This article could be about many topics. Today it’s about politics and religious liberty. Both drastically impact our lives, like it or not, and that’s why we can’t afford to sit either out.

Many Christians feel that we’re Constitutionally guaranteed the freedom of religion and that ends debate.  While it’s true Americans have the guarantee, the truth is, religious and other freedoms are under attack and have been for many years. So what’s different?  Why now must we pay closer attention and use our voices?

Rather than get into a long detailed discussion, let me pose a few questions that will make the reason clear:

This raises concerns across the spectrum of what will be deemed unacceptable or inappropriate religious ties–this time and next.

Evangelist Franklin Graham said he believes Christianity has been attacked and marginalized by “anti-Christ” media and a liberal government and that it is time for Christians to become more active in politics.

I am not going to include the written statements I have seen on that subject.  First, we’re not to judge.  Secondly, we’re instructed to pray for our civil authorities.  Here is an article on that:

Numerous religious leaders have spoken to how much the current president is doing to support religious freedom.  On that, I have strong (and many) opinions.  But my opinions are insignificant.  What is significant is that if our president fails, we lose.   If we lose, America loses.

We all know history has been being rewritten. That faith and its rightful place in our nation is under duress. Many attempt to marginalize it, many attempt to eradicate it.

It happened there.  It’s happened in many countries around the world.  At a time when there is talk of a state banning the bible (see links below), of people of faith not being fit to serve in political office, of socialism, which is a repeatedly failed pathway to communism that often bans religion, being pushed in schools and universities, we must each make the call.  Do we sit on the sidelines and watch the erosion or do we engage, get involved and walk the walk as well as talk the talk?

That is a decision each person of faith must make. There is no judgment on anyone regardless of their decision.  Nor is there absolution for watching religious freedom evaporate and then claiming unawareness or disbelief that it happened.

Let this serve as a warning.  The attempt is being made.  Whether or not you permit it to continue is up to you.

http://joemiller.us/2018/04/warning-state-ban-bible-sales/.  Some dispute this, but it bans books that interfere with the “conversion therapy” on genders.  Ban any work that involves “sexual orientation change.”

The point is only this:  There is dispute on the intention of the cited.  The dispute is not my point.  It is this:  Why in a country where we have religious liberty and it is NOT to be infringed upon, must we be concerned the Bible will be banned?

WHY AM I WRITING ABOUT THIS TODAY?

At the end of last week, a group of students went to DC for the pro-life march.  The following day, they visited the Lincoln Memorial.  While there a native American man playing a drum was observed by the students.  That man later claimed to media outlets that the students slurred him, intimidated him, and he was concerned for his safety.

The media ran with that story.  The students were doxxed online, threatened by “adults”, and school officials threatened to suspend them for their alleged actions.

After being publicly reamed and shamed, raw footage of the purported incident was released.  I watched it.  I saw the drummer get very close to a student–who blinked frequently at being so close to the drumstick.  He stood, smiling, and didn’t utter a word. On watching, I honestly believed the boy was just enjoying the drumming and observing.  At no time did even his expression reflect ill-will.  He didn’t move.  Just stood watching.

Later, it was revealed that this drummer was an activist and had been involved in similar situations before.  If you want more information on that, I’ll leave you to it.

An attorney stepped forward to defend the students at no charge.  The school shifted position and urged people to stand up for the students.  That set off a firestorm on social media under the hashtag .#ExposeChristianSchools, where some were trying to paint them as horrible institutions.

Many stepped forward to defend the students, and yet they were harmed and under threat for something that didn’t happen.  The turmoil in their lives, the dangers heaped on them by those who didn’t wait for the facts before creating havoc, was clear.

That was one reason.  The firestorm against Christians Schools was another reason.  And finally, just thinking back over the past couple of weeks to the things that are irrefutably anti-Christian was the final straw.

Watch the footage.  Read the media reports that haven’t been deleted or amended.  Look at the social media posts and tweets.

The alarms, for me, blared.  We’d better stop sitting on the sidelines and step up.  We’d better stand with the leaders who stand with us.  Pray for them.  Support them.  Because if we don’t, they will lose, and if they lose, we lose.  Religious liberty will be a fading memory.  I–we–can’t let that happen.

← Previous Link: Prev: Protect the Kids Next Link: Next: This Too Shall Pass →