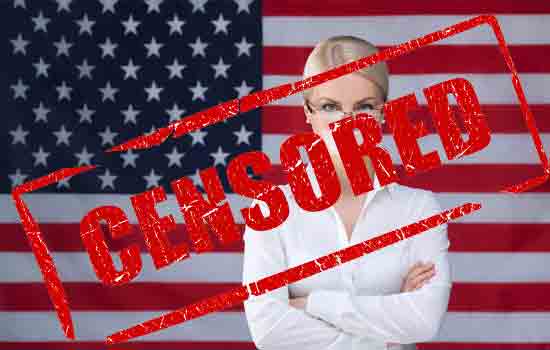 Censorship is quickly becoming a trend in America.  And it is a trend authors cannot afford to ignore.

I heard this after the recent election but blew it off as discontent. Then I saw it again. And again. I was wrong. This isn’t a reactive discontent being expressed by a few. It’s a manipulative, concerted effort, and it is not consistent with the tenets we embrace in this country.

Before speaking about this, I researched. And researched some more. I discovered that those I’d thought were discontent were sounding the alarm, warning everyday people.

What I found was certain media were ignoring or slanting stories. Some were not seated in truth but created then reported as truth.  Journalists, I’m talking about, not commentators who are naturally supposed to give their personal views. Journalists are tasked with, and relied on to present facts. That isn’t always happening. And this isn’t happening in one outlet, it’s in many of them.  Outlets that we have trusted to be reliable.

The Constitution, as amended, affords the press enhanced protections to balance its enhanced responsibility. That responsibility is to the people, not to any demographic or political entity. By slanting and withholding and creating false stories, failing to report the facts accurately, the press, at least sixty-five members and entities in it that I noted from across the media platforms, failed the people. They also failed their entities and their responsibilities to their professions.

Next I noted an attack on alternative media outlets. While they cross the spectrum, too, and some are journalists, some citizen journalists, some commentators, all were lumped collectively into a group the media dubbed “alt-right.”  Actually, those so dubbed are from all walks and persuasions. Some are “just the facts” and some offer commentary.  The objective appears to be to keep these non-mainstream news sources lumped as one and to shut them down, prohibiting them from exercising their free speech. Censoring them.  Some of these sources have audiences that exceed those many deem mainstream media.  These “lumping and deeming” actions are admittedly confusing. By what authority are they lumped? Deemed alternative or mainstream? Are those sources reliable? Should we the people trust them to make these determinations for us?

While seeking a logical explanation and motivation beyond viewership numbers to explain these actions and designations, I stumbled upon a social media incident wherein an account user, 0hour1, had run across thousands of pedophile accounts and appropriately reported them to the social network.

The network’s reaction was not expected.  Honestly, it stunned many including me. The network suspended the account of the user, 0hour1, who reported the pedophile accounts. Many of those pedophile accounts are reportedly still active. Additionally, the accounts deemed “conservative” have been suspended and the owners banned. Also, I’ve seen multiple discussions regarding topics of conversation being suppressed (prevented from trending so more people learn of them).

Today, I noted another social media network is doing the same thing regarding conservative accounts and ones it deems alt-right. What criteria it uses to make these determinations, again only it knows. Regardless, the impact is censorship.

I have seen this type of thing happen before on specific types of fiction. Where authors of those type books were not allowed to advertise, not allowed to post.  Some reached agreements that these authors could advertise and post provided the book covers were discreet, the sites banned to those under the age of eighteen.

What’s happening now is different. The criteria for banning is some nebulous decision by someone obscure, deciding what is real and what is fake news. Until now, in America, that call has always been made by the people.  Historically, what’s real gets the peoples’ support, what’s fake falls away by attrition.  In other words, if you offer fake news, the people don’t watch or read it. They go elsewhere. That’s been our way of dealing with this issue.  The red flags have been hoisted. That isn’t the way this issue is  being handled now. We the people are being excluded from the decision-making.

As writers we rely on the freedom of speech to write our stories as we wish to write them. We also exercise our own freedom of choice. Of expression. The current climate is opposed to that and acting out its opposition.

Having a better grip on the problem, it’s easy to project the outcome. If this censorship goes unchallenged, we know where it can lead. We’ve seen it happen before and want no part of it. So we shift our focus to effectively addressing it.  How do we do that?

Seeking the best answer led me to take a hard look at other social media platforms.  The two above are joined by others and are censoring.  But I found one, a new one, that boldly states its opposition to censorship and its support for free speech.  That platform is gab.ai.

There could be others. I didn’t find them, but if you do, share the information and let others know.

Facebook, Twitter and reddit apparently are all censoring. (Many are condemning them for it, challenging them on it, and I have searched and failed to find any representatives denying it. If they weren’t, it’s logical to expect to see denials.)

While I find their conduct baffling, I look at it like I do iTunes store’s decision to remove an “alt-right” (their designation) Breitbart app from their store that’s been sold in their store for several years. It is their store, and that makes what they sell in it their choice.  The censoring social media sites:  their companies, their choices.  Simply put,

Some agree, some don’t.  Shortly after the election, the CEO of Pepsico told conservatives she didn’t want their business.  I thought that was a bizarre position, and an unnecessary one. Does a bottle of soda care who’s drinking it? Do stockholders care?

Apparently stockholders opposed the CEO’s position because Pepsico’s stock took a tumble.  Every action causes a reaction, and conservatives responded with a loud voice saying in essence, “You don’t want our business. Fine. We’ll buy elsewhere.” Many independents and liberals took exception to this stance also, and objected. They too are buying elsewhere. One put it, “Next time, it could be me.”  Shoesdotcom and others have similar experiences to relate that leaves one scratching the head and wondering, What are they thinking?

Companies don’t have to express an opinion or take a side, and one wonders why they work so hard to build their brands and companies and then do so. Why self-destruct?  Have an opinion, yes. Personally. But the company?  Bizarre. How can a company know the minds of every single individual who works for it? Is that even possible?  And what about the additional people impacted? Families of employees, ancillary companies, who share strategic business alliances?  The ripple is wide…

One CEO sent a note to his employees that if they’d voted for a specific candidate they might as well resign. That went over about like a lead balloon. One report was the company lost $800 million. The author of the letter to the employees ended up removed from the company. The writer in me wonders what motivated him to write such a note in the first place. Did he assume everyone agreed with him? That working at his company gave him license to control his employees very thoughts?  Strange. Very strange and, I confess, I don’t understand it at all.  Respect seems nowhere to be found.

The bottom line is censorship is wrong. We have the right to free speech, choice and expression, and if we don’t use it, we will lose it. While companies, including media outlets and social networking platforms, have their rights and freedom to choose, so do we.  Whether or not we exercise them is up to us. We can change the channel on our TVs, get other apps, shop elsewhere, buy alternate products from different companies (competitors), engage in social media on different platforms—or not. That is our call to make. The danger is in allowing others to deem for us what is real and fake. What we can and can’t see, hear, or view. If unchallenged, what will be removed by obscure people next?

As I write this, a quote comes to mind I want to share. This is courtesy of Wikipedia:

The United States Holocaust Memorial Museum quotes the following text as one of the many poetic versions of the speech:[2]

“First they came for the Socialists, and I did not speak out—

Because I was not a Socialist.

Then they came for the Trade Unionists, and I did not speak out—

Because I was not a Trade Unionist.

Then they came for the Jews, and I did not speak out—

Because I was not a Jew.

Then they came for me—and there was no one left to speak for me.”

In this country, we all have rights. We all have the accompanying responsibilities. And we, separately and individually, choose what we deem real and fake.  When we see an entity take the wrong side on a significant situation, like with protecting the pedophiles and suspending the reporter, we decide how to react.  We choose whether or not to shop at the iTunes store and whether or not to participate on censoring social media platforms.  And we do so knowing that attrition will sort it all out.

I’m a writer. I’ve studied philosophy, business and ethics extensively. I love truth and honesty and freedom, and I rebel against censorship. I don’t want some obscure person saying knock out “alt-right” as I define them today and tomorrow to be silencing more voices.  Permitted to do so unchecked, one day that voice silenced will be mine… or yours.

Until then, I’ll be exercising my rights uncensored in my books, my articles, and on gab.ai.