Hi, everyone. I have some book news to share this morning. (You’ll see now why I’ve been such a blogging scapegrace lately!)

SURVIVE THE NIGHT is about to launch.  This is a new series I’m writing for Love Inspired Suspense.  These are CBA (religious element) suspense novels.  I’m very comfortable with sharing these with teens.

Survive the Night is the first book in the Lost, Inc. series.  In it, After losing everything, Della Jackson tries to begin again as an investigator.  But she can’t forget the past . .. and neither can someone else. Someone who won’t let anyone–even Della’s best friend, former special operative Paul Mason–stand in the way.  As Della is stalked and those closest to her are targeted, both Della and Paul realize there’s only one way to survive.  They each have to face their greatest fears, overcome the scars of the past and dare to love again . . . before it’s too late.

Survive the Night (October 1) is pre-ordering now.  You can read more about it and find bookstore links HERE.

I’ve also written the 2nd and 3rd books in the Lost, Inc. series, Christmas Countdown and Torn Loyalties.  CC will be out in December, and TL will be out in February.

Survive the Night is out in paperback, large print and digital editions.

You can read more about the series, see the character’s photos and homes and more at the series’ website.  It’s located at:  http://www.lost-inc.com.

Shades of Gray is back!  It’s been reissued by Bell Bridge Books.  This was my first military novel, written in 1994 and published in 1995.  I read it again in preparing the new release, and I love the story as much now as then.  That was such a treat!

In SOG, a couple of military friends marry to prevent his alcoholic ex-wife from getting custody of their child.  (Unfortunately, she is deemed the more stable parent because he’s in a high-risk job–and this has happened in the real world.  Amazing, isn’t it?)  They both carry scars that prohibit them from loving each other, but they both love the child and want to protect him–and so they find themselves in the middle of a biological nightmare that impacts far more than just them and their lives.

As you can tell, I’m still crazy about this story.  It proves that the power of the human spirit and the human heart exceeds the power of even the most devious of men.  (Though I confess, this villain scared the socks off me because he’s utterly ruthless.)

Shades of Gray is out in trade paperback and all digital formats.  Audio will follow but I don’t yet have the release date.

You can read more about Shades of Gray HERE.

Duplicity has been re-released!  Those of you who have been with me a while know that I wrote this book at the foot of my mother’s hospital bed, and in the ICU waiting room.  I was fearful about her and about the chemical weapons that were missing, so I did what writers do, and channeled it into a book.  A military attorney is assigned to defend an operative believed to have led his team onto an active bombing range and deserted them.  The entire team perished.  But not from a bomb blast.  While the attorney believes the man is guilty, she soon discovers herself caught in the middle of a conspiracy that astounds her (and me!) and the truth has been buried under layer upon layer of deception and misdirection.  The question of who did it becomes secondary to why–and surviving long enough to expose the truth.

Duplicityis out now in digital formats at Amazon.com, Nook, iTunes and Kobo.  The trade paperback and audiobooks are in the works and will be posted on Duplicity’s page on this site when available.

You can read more about Duplicity HERE. 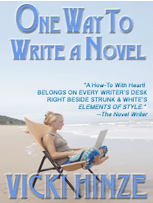 This is a writing craft book and you can learn more about it HERE.

The first chapter of these and all my books are up on the vickihinze.com website in the Book section, on the individual book’s page.

← Previous Link: Prev: New Christians Read post: When I Do What I Do... Next Link: Next: Remember to Vote Today →