TIP FROM THE TRENCH: VISION TO PAGE 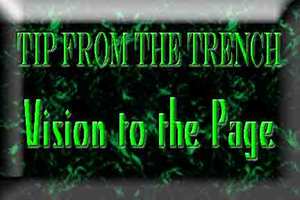 We dream, we write. We’re excited or enthused and we attempt to translate the vision in our head onto the page. We get it down. We’ve manifested the vision.

Then we go back and read what we’ve written. In our minds, we see the same visions that we saw when we wrote. We know what we meant, what we were feeling emotionally, what motivated and prompted the actions depicted and why they’re happening now. We know the people acting–and being interacted with and upon. We have insights.

But are those insights effectively translated onto the page? Really?

Or does the vision in our minds add depth to what’s written that isn’t actually depicted there?

And that’s the heart of this tip from the trench.

Writing cinematically and developing that emotional attachment is imperative to the reader-to-work connection. And too often, our vision clouds what is actually on the page.

Some suggest letting the work cool–and we should. Set it aside long enough to let the visions dissipate and then read the work again to see what is actually there.

One problem. We’re creative and that makes our imagination a vivid partner. That’s of course an asset, but in determining what’s actually on the page, it’s also a challenge. Because what triggered the visions in our minds to write also triggers the remembrance when we attempt to rewrite and to look at the work objectively.

The point being, we might gain some distance, but we cannot gain objectivity. And that makes it seriously important that we find someone who can be objective to give us a “clean” read on the work.

Naturally, we must be extremely selective in our choice of objective reader. A family member or non–writer can give us an opinion, but even at their most frank and honest, they often have difficulties in pinpointing what is or isn’t working. They know what they like or dislike but when it comes to pinpointing specifics that relate to writing elements or devices, they’re at a disadvantage. They simply don’t have the usual resources that another writer has to call on. That’s experience and expertise that’s outside their field of expertise.

That does not mean that their insights lack value. Absolutely not. They’re readers and there is no more important opinion.

But because writing isn’t their field, they often can’t relate specifics on what is wrong or how to fix it. And that’s where the value of a clean read by another writer shows its worth. Because s/he does have writing expertise and experience, s/he can give you the specifics from within your realm. And that often turns the light switch on for you.

So the tip from trench is to hook up with a partner to clean read your work. Read for each other, or pay someone qualified to read for you. But get a clean read from someone you trust who will be open and honest and give you an unstinting opinion (and not massage your ego).

This tip helps to ensure that the vision in your head is the same one you intended to convey and place on the page.