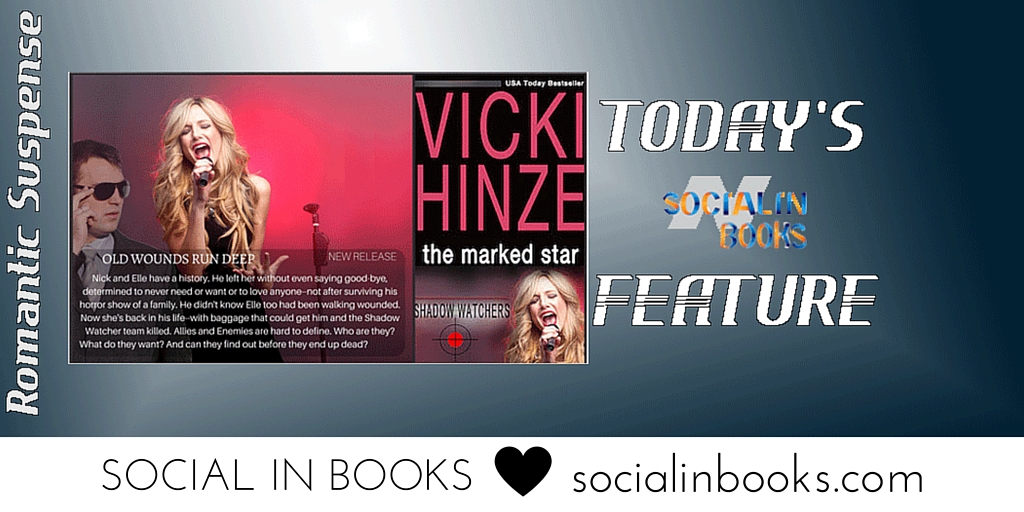 Superstar Elle Bostwick is kidnapped in London. But who has kidnapped her? NINA, a group of powerful and ruthless opportunists who will do anything to anyone to gain access to something Elle has that they want? Or the CIA, who is equally determined to prevent NINA access to what it wants? And why a singer? Why Elle? And why does she not know what they’re after?

Days later, Elle mysteriously turns up at a Shadow Watcher’s wedding reception, and the Shadow Watchers, Nick Sloan specifically, is ordered to keep her safe—indefinitely. But the top secret entity issuing the orders doesn’t say why or who is pursuing Elle. All information is being atypically withheld. That has never before happened. Why now?

Nick and Elle have a history. He left her without even saying good-bye, determined to never need or want anyone—not after surviving his horror show of a family. Nick learned the hard way to never dare to love anyone. He didn’t know Elle had been walking wounded, too.

Now she’s burst back into his life–with baggage that could get them and the other Shadow Watchers killed. Who is on their side? Who is their real enemy? And what does that enemy really want? Most importantly, will they find out before they end up dead.

CAN LOVE HEAL THEM—IS IT ENOUGH?

Nick willingly risks his life for her, but does he dare to risk his heart? Does Elle? Both have little reason to trust. Little reason to dare, except for the hope of love they find in each other. But neither is certain… Is love enough to heal deep wounds? To spare the lives and hearts of Nick and The Marked Star?

The Shadow Watchers were introduced in Crossroads Crisis Center series:

And continue in their own Shadow Watchers series:

← Previous Link: Prev: Believe in Your Story Next Link: Next: The Weary Season →

END_OF_DOCUMENT_TOKEN_TO_BE_REPLACED

END_OF_DOCUMENT_TOKEN_TO_BE_REPLACED
Manage Cookie Consent
To provide the best experiences, we use technologies like cookies to store and/or access device information. Consenting to these technologies will allow us to process data such as browsing behavior or unique IDs on this site. Not consenting or withdrawing consent, may adversely affect certain features and functions.
Manage options Manage services Manage vendors Read more about these purposes
View preferences
{title} {title} {title}