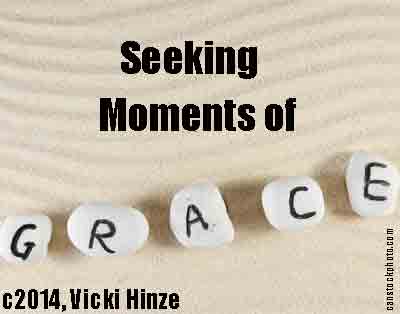 Everything in life relates when you’re a writer. Every single incident, no matter how seemingly insignificant it may be at the time. Sometimes incidents combine and we just don’t notice them. We’re too busy with the mundane details in life. Sometimes we ignore them, because to notice them requires we step outside our comfort zones and actually do something we don’t want to do.

But then there are other times. Moments when we are graced (or body-slammed) with magnificent insights.

At times those insights flow over us like heated silk and, like the butterfly, we emerge from them transformed. At other times, we rebuff the wisdom and then too often, later, we’re sorry for having done so.

But we shouldn’t be sorry, and I guess that’s the message in this–at least, for me. We get what we need when we get it and when we need it.

Sometimes we have to wait for events and insights to line up like the proverbial ducks, so that we have the foundation we need to be able to grasp and interpret accurately the insight and wisdom coming to us.

Perhaps, if we grasped the wisdom too soon, we would misinterpret it. Then, in implementing and sharing that wisdom–as we inaccurately perceived it–we’d lose the proper place for it in our lives and the wisdom would end up doing more harm than good.

These are the meanderings in my mind on why things happen as they do. I worried about these types of things early-on. When you have a brother who’s left a vegetable at five-months old and he lives for eighteen years, you think about these kinds of things a great deal.

As I type this, I remember once asking a pastor about hell. I couldn’t understand why, if God loves us as much as they say and He is perfect, then why would He condemn us, his beloved children, to hell forever. My parents were not perfect, but I knew that they would never do that to me. So did that mean my parents loved their children more than God loved His? The pastor was furious, and kicked me out of church. I was six years old.

How would I ever tell my parents I’d been kicked out of church? They’d be so angry with me. But you know, I was angry, too. Until that time, I thought that pastor spoke for God. Kind of translated so the rest of us could understand what God wanted and what He had to say.

I realized that morning that this particular pastor did not, because even my little six-year-old mind knew God wouldn’t throw out or throw away one of His kids.  We might go to hell, but He’d be right there with us because He promised never to leave or forsake us.  God doesn’t lie.

I went home, terrified I’d be busted until I died of old age. I, of course, went to Mom, because she was the soft touch. Dad was heavy-duty and all business. Much to my surprise, my mom thought mine had been a reasonable question. And she explained that God doesn’t condemn His children. He kind of puts them on restriction so they learn not to hurt themselves that same way again.

Her response made sense then, and makes sense now. That was a moment of grace for me, and a moment when I believe God spoke through my mother to my child’s heart.

Characters emulate real people. And real people have all kinds of experiences that help shape them into the individuals that they become. It isn’t one incident that makes a person. It shouldn’t be one incident that destroys them. The best characters are more complex. More real. They’ve known sadness and joy, they’ve feasted and hungered, they’ve lived. They’ve been kicked out for crossing proverbial lines. And they’ve been blessed with unexpected moments of grace.

I’m still working through these things with my characters (and self). The Down and Dead characters have made this a real challenge.  They’re wacky, cross lines all the time, but they’re good people, complex people.  Messy people.  They’re so smart in many ways–in some amazingly wise.  But they have soft underbellies and dark sides, too.  In other words, they’re as multi-dimensional as the rest of us and that makes them a little unpredictable and yet very interesting.  In the writing, one of my characters had a wonderful opportunity to embrace a moment of grace. Yet she didn’t. She wanted to, she was inspired to, she actually yearned to embrace that moment and claim it as her own. But fear battled her for that moment, and she chose to let it win.

I was sorely disappointed. But I kept writing, hoping she’d not blown it for good. Because it’s true, you know. Some opportunities do only come once.

I’m reminded of a woman who in her old age was asked why she never married. She responded that because the last time she’d been asked, she hadn’t known it was going to be the last time she was asked. I thought of that, and I hoped this wasn’t this character’s last shot. That there would be one more so that she could be content with her life.  I so want content characters.  Happiness is so transient, but content–we can be content through anything with the right foundation supporting us.

I was nearly at the end of the book. Almost there, just pages away. And I had absolute knots in my stomach because there was no sign of that second chance. I prayed, pleaded, begged, but it just wasn’t happening. And honestly, the writer in me had no idea what to do. The woman in the writer was in a full-out rebellion, and mutiny was a pencil point away. I can’t condemn her to less than she could have. I can’t.  A life without contentment?  Not in my book!

But the answer didn’t come.  I felt a lot like an imperfect parent, wanting the best for my child yet unable to help her get it. I felt a little lost and helpless and, yes, angry.  I’ve trudged through all of this with her for . . . what?  Turmoil?  Discontent?

Then it hit me.  This is how God must feel, wanting the best for His children. Light bulb ON!  And I experienced the answer through emotions connected to the question I asked at six. And I knew God never gives up. Never. And I might be hanging onto hope for my character by a thin thread, but I couldn’t give up on her.  And so I didn’t.  I kept writing.

And scant pages later, there it was. That moment of grace.

And she took it.

WARNING:  This is a no-edit zone.  I edit books and professional correspondence. I do not edit email or this blog. This is chat time for me, fun and not work–and I don’t want my time with you to become work.  So if the grammar is goofed or a word’s spelled wrong, please indulge me and just breeze on past it. I’d appreciate it–and salute you with my coffee cup. 🙂

END_OF_DOCUMENT_TOKEN_TO_BE_REPLACED

END_OF_DOCUMENT_TOKEN_TO_BE_REPLACED
Manage Cookie Consent
To provide the best experiences, we use technologies like cookies to store and/or access device information. Consenting to these technologies will allow us to process data such as browsing behavior or unique IDs on this site. Not consenting or withdrawing consent, may adversely affect certain features and functions.
Manage options Manage services Manage vendors Read more about these purposes
View preferences
{title} {title} {title}