Happy New Year!  I hope you’re off to a good start for having a great 2013.  I have a lot to share and want to respect your time, so I’ll keep this short.  Know that I’m grateful for your interest in my work and for your support.  Also know I’m wishing you much joy and many blessings! 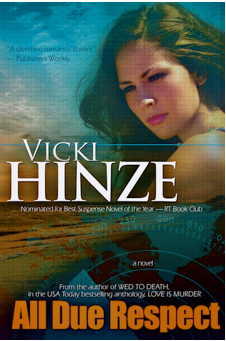 1.  All Due Respect, a general market romantic thriller I wrote some years ago is being re-released by Bell Bridge Books.  It’s available now in trade paperback and ebook formats.

Can a first-grade teacher from Grace, Alabama stop a terrorist group from its deadly mission?

Can she trust her heart again?

Terrorists have stolen the missile system Seth and Julia designed, and they fully intend to use it. Seth needs Julia’s help to find, outwit and halt them, but he and she didn’t part on the best of terms. He doesn’t know that Julia has a secret enemy who might kill them both. Can she fight that threat and the terrorists-all while keeping Seth in the dark? How can she refuse to try, with millions of lives at stake?

“When it comes to military romance, Vicki Hinze is a four-star-general.” – Harriet Klausner, Book Browser

Military attorney Tracy Keener is ordered to defend Captain Adam Burke, a man accused of cowardice and killing his own special operations team.  Everyone believes he’s guilty, including Tracy, but she must discover the truth—even if it jeopardizes both of their lives.  She’s eager for honesty, but not for the attraction she feels for her unwanted client, and discovers both are equally dangerous.   You can read the first chapter here. 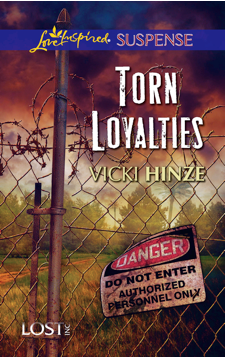 2.  Torn Loyalties, Book 3, Lost-Inc., (Madison’s Story hits the shelves February 1st. These are Love Inspired Suspense novels and are available in print and ebook formats.  Both are available for preorder now.

It’s finally former POW Madison McKay’s turn!  Because she’d been deserted, she doesn’t trust.  Not in her work, and certainly not with her life.  But when she’s accused of a security breach, she has to choose:  to trust Captain Grant Deaver with both or disappear forever.  She takes the leap—and discovers he’s been lying to her all along.  Now, she must again choose to trust him or not trust him, only this time, she’s risking more than her job and life, she’s risking her heart.

3.  Reissue by Bell Bridge Books, Legend of the Mist, will be released the last week of January.  (I don’t yet have the cover).  You can read a bit of it here and learn why I wrote the book also.  It has a very special story behind it.  This was first published in 1997 as Festival by Victoria Barrett.  Legend of the Mist will be published under my real name, Vicki Hinze.

I don’t yet have the cover, but it should be in any time.  Will post it to Facebook as soon as it’s in.

4.  Heads up!  Maybe This Time will be reissued mid-February!  Paranormal, time travel, past life regression and more, written in 1988, long before there were paranormal romantic thrillers much less a sub-genre of them.  More on that next time. 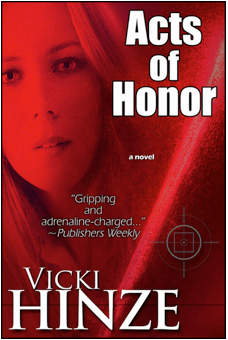 5.  And a special treat!  Mark your calendars.  On January 11th Acts of Honor will be free on Kindle!

This is a general fiction romantic thriller with a military element (akin to Shades of Gray, All Due Respect, and Duplicity).  One of my all-time favorites centered around the question:  when soldiers with top secret (or higher) clearances become mentally unstable, what do you do with them?  What happens?  Or could happen in a twisted world?

You can’t just cut them loose.  Others want and need that info, and will do anything to get it.  So how do you protect the soldiers, their families?

Is this what’s really going on here, or is it something even more dark and sinister?  Are these Acts of Honor, or Betrayal to the most shocking degree?

You can read the first chapter here.

6.  I now have 7 different titles that have become audio books.  You can find them at audible.com, acx.com, or through your usual outlets.  The titles are:  Mind Reader, Duplicity, Not This Time, Deadly Ties, Wed to Death in Love is Murder, and two books on writing:  One Way to Write a Novel and Writing in the Fast Lane.

I’m doing a weekly column for the Social In network called Writing—Live!  Enjoying it very much.  But please don’t think it’s “just” about writing.  Remember, everything in life is fodder, so that’s what I’m writing about—bits of everything.  Mentioning that in case you’re interested.

Until next time, be well, stay safe.  Drop by to visit on Facebook or Twitter and let me know what’s going on in your world.  Know that I am wishing you much joy and many…

← Previous Link: Prev: New Release: All Due Respect Next Link: Next: Keeping Those New Year's Resolutions →

END_OF_DOCUMENT_TOKEN_TO_BE_REPLACED

END_OF_DOCUMENT_TOKEN_TO_BE_REPLACED
Manage Cookie Consent
To provide the best experiences, we use technologies like cookies to store and/or access device information. Consenting to these technologies will allow us to process data such as browsing behavior or unique IDs on this site. Not consenting or withdrawing consent, may adversely affect certain features and functions.
Manage options Manage services Manage vendors Read more about these purposes
View preferences
{title} {title} {title}