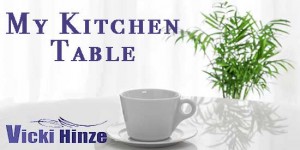 I don’t care how long you’ve been writing, or how many books you have released, there’s always an electricity in the air on the day a new book is released.  Okay, so part of it is elation, and part of it is anxiety, hoping readers will receive it with the same enthusiasm you release.  Either way, it’s a day of seeing another segment of your writing dream realized.  I thank readers for that.  Readers and mentors and publishers and all who have helped me in the pursuit of this dream, and I’m thankful all of you are here to share it.

I first wrote this story as a novella a long time ago and St. Martin’s Press published it in an anthology with two other stories.  Now, it’s been rewritten and is on its own.  That increases the anxiety a little, but bless my BETA Readers, because their reactions have come in and have been extremely positive and, as always, helpful.

I do hope you’ll enjoy the story!  Here’s a little more about it: 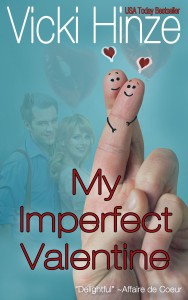 Is it possible to be in love with a man you’ve never met?

Card Shop owner Amanda Jensen admits Jonathan, the illustrator she’s worked with for two years via email and texts, touches her in ways no man has ever touched her. But how does he feel about her?

Having no idea, she’s been dating Bradley. He’s rich and successful, well able to offer her security and a lifestyle that assures she’ll never want for anything, and he wants to marry her. But he does not touch her. Could he ever? Could love between them grow?

Already confused and lacking confidence in her own judgment, a customer’s intriguing nephew, Max, enters her world, encourages her to follow her dreams, and tests her heart, but he has secrets he won’t share for reasons he won’t state.  Is it possible to be in love with two men simultaneously?

Making decisions to keep the shop she’s wanted all her life afloat, to settle her confusion about what she really wants in a man, Amanda has more questions than answers. She’s torn and riddled with doubt. This is one time, she can’t afford to make a mistake.

Three men. Three very different relationships. Jonathan, who touches her soul and might or might not love her. Bradley, who doesn’t touch her soul but offers her security and a life free from worries. Or Max, a man who attracts her, supports her, but carries secrets he won’t share.

Amanda must decide. Which man will be perfect for her? Her soul mate?  The man with whom she can build her best, most fulfilling life? Which man will inspire her to say, “He’s the one. He’s My Imperfect Valentine?”

My Imperfect Valentine is available in digital formats at the following retailers:

To celebrate the release of MY IMPERFECT VALENTINE, Vicki is giving away a new Kindle Paperwhite.  Winner randomly drawn on Valentine’s Day. 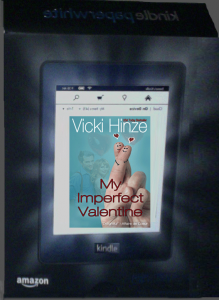 For details to enter, visit:

← Previous Link: Prev: Less than Creative Next Link: Next: Why Writers Write the Books They Write →