Inspire Me! Part 5 with Kathi Macias: Practical Experience on Sorting Through Advice

The Part 5 segment of the Inspire Me! series: Practical Experience with Author and Speaker, Kathi Macias, posted on the Social In Network. Adding it to the On Writing Library here.

Inspire Me! Series Part #5:  Sorting Through the Advice

Practical Experience on Things Writers Should Ignore with

Continuing with the Inspire Me series, we’ve finished the fourth installment, the second video:  Things Writers Should Ignore.  (If you missed it, you can view it here.)

Let me tell you a bit about Kathi, so you know the caliber of woman speaking to you.

She’s a multi-award winning writer who has authored nearly 40 books and ghostwritten several others. A former newspaper columnist and string reporter, she has taught creative and business writing in various venues and has been a guest on many radio and television programs. Kathi is a popular speaker at churches, women’s clubs and retreats, and writers’ conferences. She won the 2008 Member of the Year award from AWSA (Advanced Writers and Speakers Association) and was the 2011 Author of the Year from BooksandAuthors.net. Her novel set in China, Red Ink, was named Golden Scrolls’ 2011 Novel of the Year and was also a Carol Award Finalist; her October 2012 release, Unexpected Christmas Hero, was named 2012 Book of the Year by BookandAuthors.net.  Kathi “Easy Writer” Macias lives in Homeland, CA, with her husband.

As you can see, Kathi isn’t a rookie, and in a career spanning over thirty years, she’s run into a lot of situations and both received and given a lot of advice.  Kathi reviewed the Inspire Me! articles (listed below) and adds this on sorting through the advice:

There’s an old Hebrew proverb that goes something like this. If you’re walking down the street and someone comes up to you and calls you a jackass, ignore them. If an entire crowd of people come along and call you a jackass, maybe it’s time to buy a saddle.

Successfully sorting through the many streams of advice and opinions that come our way can be a lot like that. So much of the advice we receive, in life generally and in writing specifically, is subjective, simply because it is based on opinion. For instance, I occasionally go to Amazon to read the reviews posted about my books. Ninety percent of them are quite favorable, but occasionally I spot one that flies in the face of what everyone else has said. One of my most recent releases, The Moses Quilt, is a blending of a contemporary romance with a historical background. 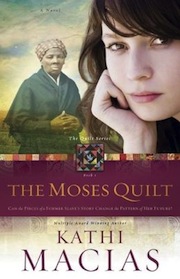 The Moses Quilt
by Kathi Macias

Interesting—and confirmation that opinions are often subjective. Because opinions drive advice, it is therefore vital that we find an effective way of sorting through all the advice that comes our way before making a decision to heed it. Is the advice to turn left coming from one or two individuals, while the balance of the crowd is saying to turn right?

Of course, there are occasions when even the crowd can be wrong, and we have to make the choice to heed the advice of one or two trusted and knowledgeable individuals instead of following the more popular idea. I found that to be true when it came to pursuing my personal passion to write issues-related fiction from a Christian worldview.

When I first came into the publishing industry, way back in the Dark Ages (early 1980s, actually), it scarcely resembled what it has become today. We authors—unless we were household-name celebrities—didn’t have agents or publicists, and we certainly didn’t have to be involved in marketing our own books. We simply wrote the manuscript, turned it in, did editing/corrections if/when they came from the publisher, and went out on a book-signing or two if the publisher set it up. That was the end of it—except, of course, waiting anxiously for a royalty check (which sometimes came, sometimes didn’t).

That transition required me to listen to the advice of those in the industry who saw the change coming. Trusted colleagues told me I needed to establish a web presence. Seriously? I didn’t even know what a blog was! But I heeded their advice and got on-board with as great an Internet presence as possible. I also ended up with an agent and a publicist, both of whom have been huge helps in growing my career. And finally, I caved in to the need to develop a speaking platform. Now I belong to two speakers’ bureaus, both of which have helped me tremendously to expand my name recognition and, consequently, sell more books.

However, when it came to my ongoing desire to write issues-related fiction from a Christian perspective, I refused to heed the voice of the “crowd”—those who said there was no room for such “heavy” writing in the Christian publishing world. I just couldn’t believe that the passion that burned inside me to write such books should be squelched or denied. And so I persisted, though my pile of rejection slips continued to grow. At last I found a publisher who shared that passion. Though they had never published fiction of any kind before, they were willing to partner with me to take a chance and launch what we together termed “fiction with a mission.” As a result, we’ve now put out a dozen novels with social justice themes, and I have become known (much to my amazement!) as a modern-day “freedom fighter.”

And you know what? I consider it a great honor. I am grateful that in the midst of so many voices crying out to turn right instead of left, I listened to that quiet voice inside that said, “Turn left. Follow your passion.” Now, each time I receive a note from someone, saying how one of my books has inspired them to get involved in fighting human trafficking or writing letters to try to help free religious prisoners and prisoners of conscience, I know I have made the right choice.

Many thanks to Kathi for sharing her practical experience with us.

Note that Kathi had skills (writing) and had to acquire skills (web, blog, public speaking), but she had the ability to acquire those skills.  That’s significant.

As discussed in the second video, we are often called upon to do things we want to do and ones we really don’t want to do or know how to do.  Few writers like spending so much time blogging, speaking, and doing other non-writing tasks that are necessary in today’s writing career.  But they do them, and the wise ones work diligently to become good at them.  They consider these efforts part of the “writing package.”

Another significant thing to note is that Kathi received advice to stay away from issue-driven stories and was encouraged to write other types of stories.  For writers, rejection letters can be potent advice.  But Kathi heeded the voice inside telling her to stick with fiction with a mission.  That’s purpose-writing, and it is purpose-writing that harvests a sense of accomplishment and fulfillment in the writer.

Sometimes it’s hard to say no.  When you’re eager to publish and you’re being encouraged to write something other than what you want to (or feel driven to) write, you’re tempted to just do it.  There are times when that decision will prove wise. And times when it proves to be nothing more than a distraction that keeps you from writing the work you’re meant to write.  Knowing which is which—wise or distraction—is where that little voice inside comes in handy.  While we might have trouble distinguishing between the two, the little voice seldom does, which proves that:

While we should listen to what others have to say, we should ultimately make our own decisions.  Others, unfortunately, can’t hear our little voice.  We can and do—unless we allow ourselves to have our attention diverted by distractions.  Which is why distractions will be the topic in our next installment of the Inspire Me! series.

The previous installments in the Inspire Me! Series:

Part 1:  When You Get Knocked Down (video)

Vicki Hinze is the award-winning bestselling author of nearly thirty novels in a variety of genres including, suspense, mystery, thriller, and romantic or faith-affirming thrillers. Her latest releases are: Torn Loyalties (romantic suspense), Duplicity (mystery/thriller), Maybe This Time (paranormal romance), One Way to Write a Novel (nonfiction). She holds a MFA in Creative Writing and a Ph.D. in Philosophy, Theocentric Business and Ethics. Hinze’s website:Facebook. Books. Twitter. Contact. www.vickihinze.com

END_OF_DOCUMENT_TOKEN_TO_BE_REPLACED

END_OF_DOCUMENT_TOKEN_TO_BE_REPLACED
Manage Cookie Consent
To provide the best experiences, we use technologies like cookies to store and/or access device information. Consenting to these technologies will allow us to process data such as browsing behavior or unique IDs on this site. Not consenting or withdrawing consent, may adversely affect certain features and functions.
Manage options Manage services Manage vendors Read more about these purposes
View preferences
{title} {title} {title}