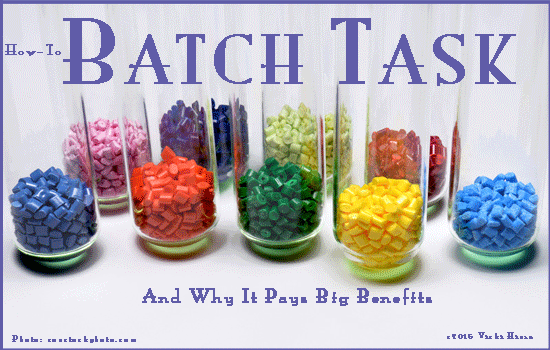 We all have routine, repetitive tasks. They include everything from paying bills to preparing blog posts to finding posts by others we consider helpful, useful to our readers. We’re clear on the value of a priority to-do list and understand that working with one allows us to accomplish more in a shorter period of time and to stay ahead of tasks so that we spend a lot less time functioning in crisis-mode.

Many of us have learned that those priority lists are an extremely valuable asset. They work. We also know the value of seeing a task through, start to finish, before moving on to another task. But many of us haven’t considered batching repetitive tasks so that they don’t eat a chunk of our time every day.

We can batch together a group of the same or similar tasks and complete them as a unit. Why should we? Let me share a personal example.

I write multiple blogs, columns, and interviews. My first batch-task test was on interviews. I needed one per month and I thought this would be a good test because those interviews needed to be timely, relevant and accurate when published. Due to the timeliness factor, I didn’t want to interview people too far in advance, and yet the core questions on the interviews weren’t really impacted by time.

I slanted the interviews even more on personal preferences and tastes to diminish the risks of time working against advance preparation further. That permitted me to ask questions that others were not asking, and to prepare the interviews in advance without running into the challenge of them containing information that was no longer relevant.

The result was that I could do quality interviews with unique content three to six months in advance. And I discovered that once I was in interview-mode, doing multiple interviews that contained substantive information were prepared in a shorter time than when I prepared them singularly. I concluded that batch tasking worked well for interviews.

Finding merit in that, I naturally wondered what else I could batch task.

Frankly, I doubted I’d conclude it a good idea to batch task blog posts, but I wanted to try it because I do an awful lot of them. If I could save time and do them more efficiently, it’d make a big difference in my daily schedule. So without much hope for success, I gave it a shot.

I set a weekday, rotating schedule for four blogs. That gave me the number of each type of post I needed for a period of two months. Then, I created all of one type of post for that time period. When blog one’s posts were completed, I moved on to the posts for blog two, and so on until I had two months of posts for each of the four blogs.

Next, I created the graphics for each of the two-months of blog posts, working one blog at a time until finished.

After that, again working one blog at a time, I assigned key words, tags, and categories to each of the posts.

Next, I did edits and final reads in the same fashion. When all the posts for all the blogs were ready, I uploaded and scheduled them.

And I spent less than half the time I normally did doing them.

Batch tasking worked for blogs. Even better than for interviews because there were far more of them. So the time spent was efficient, and production increased. Interestingly enough, so did the quality of the posts.

That saved enormous amounts of time because from post to post the focus was already active. And one post spurred thoughts for another, and another, so the flow of the content was smoother. Because I was creating them back-to-back, it negated the need to double-check recent posts to be sure no two were too similar. That too was a time-saver.

The biggest benefit was that day-to-day for two months all my posts were done, uploaded and schedule. I didn’t have to stop what I was doing to write more. I had only to verify that the scheduled posts had published. Otherwise, there was no interruption to the daily schedule. That enabled me to intensely focus elsewhere, which created efficiency benefits for those projects also.

Now maybe you enjoy the constant shifting of focus when executing your tasks. Maybe batch tasking seems more like a chore than an efficiency tool for you. For me, it enables me to accomplish a lot more without working harder, longer hours. The absence of constant focus shifts alleviates stress and enhances the sensation of working more smoothly with fewer interruptions. In other words, without reality jerking my creative chain every two minutes.

For me, the positives far outweigh the negatives, and I’m constantly on the lookout for other batch tasking opportunities. I love working with fewer to-do items hanging over my head, and fewer voices inside my mind nagging me to do this or that next. Having a shorter to-do list every morning is pretty nice, too.

If there’s even a remote chance that you might benefit from those kinds of perks, I recommend you try batch tasking. It’s a great way to accomplish a lot in a short period of time that pays benefits over a long period of time. That translates to free time you can otherwise use. Maybe even to splurge on a full hour for lunch!