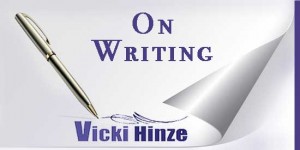 My point is that writers are not, by nature, indecisive people. By necessity, they can’t be. Because from the first glimmer of an idea, writers must make choices—and writers must continue to make choices constantly and continually, non-stop, throughout the course of a story or a book or an article.

Writers decide who and what goes in, who and what doesn’t, and why every word belongs (or doesn’t belong) on the page exactly where it appears on that page. They know that if space is given, it must be earned, and the more jobs every novel element included does, the more cache it earns. That cache is earned ink and novel space.

Writers know to kill off as many secondary characters as will die.  That it’s only the ones who refuse to die because they prove they’re essential to the story are permitted to live and occupy novel space.

Expressing ideas, thoughts, beliefs, opinions, attitudes, observations—all of these things and more make writing honestly essential. From the heart is a phrase commonly heard as is book of the heart.  Translated to non-writer speak, it means the writer is stripping off the veneer and party faces and boldly expressing the truth of the story as he or she sees it. Readers, of course, are free to agree or disagree, and they do.

That stripping away makes writing an occupation unsuitable for wimps, or for indecisive people.  Because every single thing disclosed within the pages the writer creates reveals who the writer is inside.  Yes, even revelations from those deep and dark places writers don’t like to visit much less talk about.

That writers do it—reveal those secret parts of themselves—whether they’re in the way they structure, craft characters, the themes they choose, their personal author themes, or in the setting details they incorporate or shy away from, writers reveal.  And that, simply put, takes courage.

As events unfolded in Paris, I thought about the courage of those writers. About the threats against them, which admittedly angered me. We tend not to think much about the freedom and liberties we enjoy until they’re threatened, but when they are, and when attempts are made to censor through intimidation, all writers take it personally.

What drove this home for me was a news clip of one of the writers killed.  In an earlier interview, he said he’d deliberately chosen not to have children because he knew he would be killed for what he wrote. This wasn’t his first death threat.  He lived with the courage of his convictions—that he would not be silenced.

There was a writer who knew the costs, deduced he would pay them, and chose to write his truth anyway.

Writers deliberately make themselves vulnerable—emotionally and physically. It takes courage to write without being under death threats. It takes more courage to write while under them. And, whether or not you personally appreciate the art created, we all should appreciate the courage required in those taking on the battle for freedom of expression.  It is not, you see, a battle fought for one man, or any one group, but for all, including all others who write.

Regardless of what is written or who writes it, we aren’t all going to approve of or even like it. That’s a blessing really, because if we all did, we’d only need one writer. We are human beings. Diverse. Blessedly diverse, and richer for it.

Yet by virtue of calling ourselves writers, we share an obligation to protect the right to write what we choose, and we must have the courage to do it. With the freedom to do it comes the responsibility of never forgetting that this privilege has been earned and paid for in blood.

The privilege and responsibility, of course, extends beyond writers to all people. Saying what we think, choosing what we wish to do or to not do—all the freedoms we enjoy—weren’t gifts but fought for and won by men and women of courage.

The question now is one of retention. Will we continue in their courageous tradition to retain freedom? Accept our responsibility to it?

This is a question each of us must answer, and the time to answer it is now.

© 2014, Vicki Hinze. Hinze is the award-winning, USA Today bestselling author of nearly thirty novels in a variety of genres including, suspense, mystery, thriller, and romantic or faith-affirming thrillers. Her latest release is My Imperfect Valentine. She holds a MFA in Creative Writing and a Ph.D. in Philosophy, Theocentric Business and Ethics. Hinze’s online community: Facebook. Books. Twitter. Contact. www.vickihinze.com.

← Previous Link: Prev: Not So Jolly Flu Season Next Link: Next: Less than Creative →

END_OF_DOCUMENT_TOKEN_TO_BE_REPLACED

END_OF_DOCUMENT_TOKEN_TO_BE_REPLACED
Manage Cookie Consent
To provide the best experiences, we use technologies like cookies to store and/or access device information. Consenting to these technologies will allow us to process data such as browsing behavior or unique IDs on this site. Not consenting or withdrawing consent, may adversely affect certain features and functions.
Manage options Manage services Manage vendors Read more about these purposes
View preferences
{title} {title} {title}