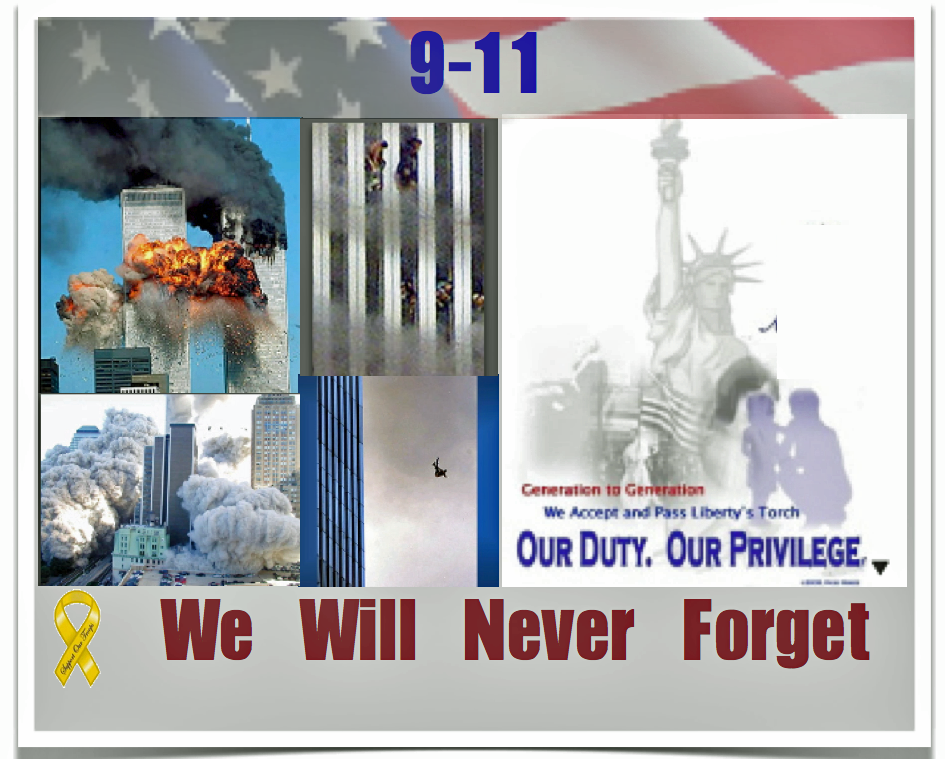 The war continues.  Four major planners of the attacks on the towers, the Pentagon, and the attempt on the Capitol that, due to the efforts of individual Americans, failed and crashed into a Pennsylvania field, still remain alive and incarcerated.

Heroes and heroines were in abundance on 9/11.  Many sacrificed themselves for others.  They were ordinary Americans, not endowed with supernatural powers.  They made choices to do what they could to spare others.  Some knew their lives were on the line.  Some knew they were doomed to death.  Some made a conscious decision to forfeit themselves.

As I look back at that day, which still rings so vivid in my mind, I recall image upon image, and story upon story of those who exhibited enormous courage.  Those who climbed up aware the towers could come down.  Beemer’s, “Let’s roll.”

In my mind, I fast forward to today where corruption and and the skewing of facts is deemed so normal it’s rarely reported.  I look at the changes in our nation, and I wonder where has courage gone?  Honor and integrity, patriotism?  Respect?  What of respect?

We are not the America we were on 9/11.  Much has been done to divide us and tear us into warring factions.  I don’t blame others for that.  I blame us.  To our detriment, we allow it.  Because we do, we have exactly what we deserve.  We’re not ignorant of the fact that when we forget who we are and why we are who we are, we become what we believe we are.

Many of Americas enemies have devoted much to divide and conquer us.  And they’re succeeding only because we allow it.  Divide and conquer.  It’s simple, yes, but still effective.

And so this morning, I remember our heroes.  I remember the sacrifices of our troops in the years since, their continued sacrifices.  I think of the heroes of 9/11 who gave all, and I imagine them looking down on us and see what they see, and I wonder about their reaction.  I wonder if they search the hearts of the many who never spare a thought to their nation, to the future, and find them worthy recipients of their heroism.

I wonder if they search the hearts of those who hold dear values and integrity and honor and dignity and respect and wonder why they are silent.

And I wonder if they feel their sacrifice was a worthy one.

America is hard.  Its people must not only want freedom but must be willing to sacrifice for it, as our 9/11 heroes sacrificed.  Our founders, when forming America, pledged their lives, their fortunes and their sacred honor.

Perhaps today, on this day of remembrance, we’ll remember those heroes, too, and weigh the value of their gifts to us, and we will pause to think again how blessed we are to know freedom.  Perhaps we will pray for our nation.

Eleven years today.  There will be no public speakers this year.  The president has nudged and now has eliminated asking for prayers for our nation.  No God.  Again.  Instead, he calls for a day of service.

I fear he has not yet learned that the greatest service any and all can give is to pray.  With God, all things are possible.  Even the healing of a divided and broken nation.

Please visit www.usaprayitforward.com and join me in praying for our nation.  Let’s remember our heroes . . . and that they were ordinary people who rose to the occasion to do extraordinary things.  Let’s in remembrance find that hero inside us and offer the very best service we can offer:  prayer.

END_OF_DOCUMENT_TOKEN_TO_BE_REPLACED

END_OF_DOCUMENT_TOKEN_TO_BE_REPLACED
Manage Cookie Consent
To provide the best experiences, we use technologies like cookies to store and/or access device information. Consenting to these technologies will allow us to process data such as browsing behavior or unique IDs on this site. Not consenting or withdrawing consent, may adversely affect certain features and functions.
Manage options Manage services Manage vendors Read more about these purposes
View preferences
{title} {title} {title}