3 REASONS WHY WE TALK AND TALK AND NOBODY LISTENS 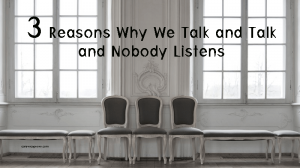 We all have a voice and a need to speak. But we also have a need to be heard, and when we aren’t, we get frustrated. Sometimes we get angry, sad, depressed, and sometimes we just give up. Why bother talking if nobody listens, anyway?

If we’re of a mind to quit trying, nothing will dissuade us. But if we truly want our voices heard, then rather than quitting, we should be asking ourselves questions. Here are a few to ask to help us identify the root problem:

1.  Why is nobody listening?

A. Is it the message? Are we, like in the photo above, standing in an empty room and sharing our message with empty chairs? If so, that’s the challenge. We have to, as my agent, Chip MacGregor, is fond of saying, “find our audience and stand in front of it.” To do that, let’s look at the other side of this: the messenger.

Is it the messenger? Are we conveying a concise, well-reasoned message to an audience likely to relate and engage?

Example. If you stand before a group of millenniums (or any other group with a commonality) and degrade them, odds are slim they’re going to be receptive to anything you say. If you talk books to people do not read, you might as well be standing in the empty room talking to the empty chairs. The message and messenger must be in sync, talking and listening to something of mutual interest—if from different viewpoints.

To determine who your audience is, talk with likely candidates and listen to them. Find out what they need or want, and then provide it.

Sometimes it’s not what you say as much as the way you say it that turns people off. When turned off, they shut you out and don’t hear or listen. So do your best to objectively determine how you’re coming across to others.

Example. If you talk down to people, or as if you’re better than them, they’re not apt to care much for you or what you’re saying. Competence is respected. Arrogance is not.

People listen better and grant you more latitude if they like you. When you respect them, they know it. When you admit what you don’t know, they respect that, too. No one knows it all, and those who think or act as if they do irk others. Those who make us feel inferior, unwise, belittled—we just don’t like it, and generally we don’t like them. If they were as smart as they thought, they’d know better than to treat people like this, right? Since they don’t, well, are they really that smart?

A long time ago, my father told me a story about a man who constantly told everyone else he was brilliant. He actually thought others would find that appealing. I asked my dad what happened, and he gave me one of those flat looks. “When you’re smart you don’t have to tell people. They know.”

I thought about that for a long time. I still do. I enjoy being around smart people. They’re fascinating. But I so don’t enjoy being around people who continually tell me how smart they are. It isn’t just the modesty or humility factor. It’s that we truly do know when others are smart, and if they have to tell us, they’re either assuming we’re too stupid to figure it out on our own, or . . . Well, there is a third reason—and it’s one we are apt to forgive them for employing.

Sometimes we say things to others to remind ourselves. We hope if we say something often enough, we’ll believe it. That if we imagine it, it will become reality. We need the confidence, the reassurance, the affirmation. Perhaps the man my dad told me about kept telling others he was brilliant for himself and not others. I wonder. Because if so, he wasn’t arrogant, he lacked confidence. And lacking confidence—we’ve all done that at some time on something—he needed the boost. Now, that’s human. We all understand feeling shaky. We relate and empathize—provided we know that’s the root cause of his comments.

I remember, when I first started speaking to large groups, I was so nervous. It wasn’t that I didn’t know my topic, I did. I made sure I’d studied up and was prepared. I just didn’t want to step on my tongue. You know what I mean. Embarrassment or shame doesn’t sit well on anyone’s shoulders. I mentioned that I was nervous to a friend. She said, “It’s okay to be nervous. Just tell them you are, and then don’t talk to them, share what you know with them.”

That advice resonated with me, so I took it. My mouth was so dry I drank a full bottle of water before getting to the stage. I stood at the podium and said, “I haven’t done much speaking to large groups and frankly I’m scared to death. But the information I want to share with you can really help you, so I’m going for it. I’ll give it my best.”

That group was fantastic to me. And the strangest thing happened. Once I started talking, I wasn’t nervous anymore. My point is that people understand fear. They understand struggling through fear, and that no one wants to look or sound foolish.

I also discovered something that touched me deeply that day. When you struggle, put yourself in an uncomfortable position to help people, it moves them. They too are touched.

That said, know this exchange was genuine. Not convenient and not planned to manipulate them. People pick up on genuine emotions and honesty, too. And they know when they’re being played. Never play others. Respect others. They resent manipulation. They respond to real and genuine.

The key is to speak to others where they are in a way that expresses your genuine desire to share what you can on something that appeals to them.

In other words, it isn’t all about you. It’s about them. Your listeners, your readers. What are you offering them? If they listen, what do they gain? How does it apply to them, in their lives?

Find that and you’ll see people in the chairs and listening to what you have to say.

2.  We’ve all heard to write what you know. That goes for talking, too.

Well, if you’re doing that (talking) and no one is listening, and you’re sure you’re talking to the right people—those who are typically receptive and interested in your subject matter, then clearly something else is wrong.

It could be that what you know is what your listeners already know, and if you dig deeper into the subject or take an atypical approach to the subject, you’ll strike a receptive chord with them.

The key isn’t really to write what you know, it’s to know what you write. Don’t be afraid to look at your subject through a different prism, in a different light, from a different perspective.

You have things you want to say that you want others to hear. So does everybody else. Friends, family, coworkers, clients, readers. We all have ideas to share, opinions to express, and we all want listeners so our voices are heard.

That brings us to a question that might not be comfortable to answer, but it is important: Are you a good listener?

If you always talk and never listen, others grow weary of that one-sided conversation. If you never listen, then the other person is never heard. And s/he feels that frustration and anger, and sadness, and upset that you feel when you’re not heard.

Once, I had a chat with an executive who carried a lot of clout in my industry. It was just a simple chat—we’d just met. I did a lot of listening and asked a couple questions on the topics he’d raised that he enjoyed discussing. Later, he told a third person I was one of the most interesting people he’d met in a long time. What, she wanted to know, had we talked about. Nothing, really, I admitted. Just normal stuff.

He’d talked about growing up in a small town, fishing as a kid, and how he’d loved that lifestyle so much, when he grew up, he went back to that place with his kids. Lots of fond memories for him of that time in his life, and fond memories with his own children there.

I wasn’t interesting. That’s my point. I was genuinely interested. I’d never had a place like that in my life. His attachment to it was compelling so I listened. But my interest in his life generated his takeaway: that I was an interesting person.

Now think about that a second. It’s very powerful, really. I said very little, but he wanted to talk about something other than business. Something he fondly recalled. It was interesting; he was animated, and his joy shone in his eyes. You know what I mean. He loved discussing this. And that fascinated the writer in me.

I learned a lot of lessons about people during that brief conversation—about listening but also about engaging on things of interest to the other person. Taking joy in their enthusiasm.

When you talk and nobody listens, maybe the first question should be one to yourself: When others talk to you, are you hearing and listening to them?

There’s a big difference between the two, and we intuit those differences. Think about it. Uninterested people’s eyes glaze over, they look beyond you not at you, and sometimes even fight not to yawn. When engaged, they make eye contact, hold it, and nod their agreement—we hold their focus and give them our focus. We pick up on the amused twinkle in their eye, the half smiles, or other emotions they are experiencing. And we know that we’re both engaged in the free flow of sharing between us.
Answering the three questions help us prepare:

Then we’ll talk and some will listen.

We greatly improve our odds when, before we do those preparations, we we stop talking long enough to hear their voices. Hear and listen. If we do, then we reap a treasure of a reward: they will tell us what they want and need.

© 2015, Vicki Hinze. Hinze is the award-winning, USA Today bestselling author of nearly thirty novels in a variety of genres including, suspense, mystery, thriller, and romantic or faith-affirming thrillers. Her latest release is The Marked Bride, Shadow Watchers, Book 1. She holds a MFA in Creative Writing and a Ph.D. in Philosophy, Theocentric Business and Ethics. Hinze’s online community: Facebook. Books. Twitter. Contact. www.vickihinze.com. Subscribe to Vicki’s Newsletter.