Down and Dead in Dixie 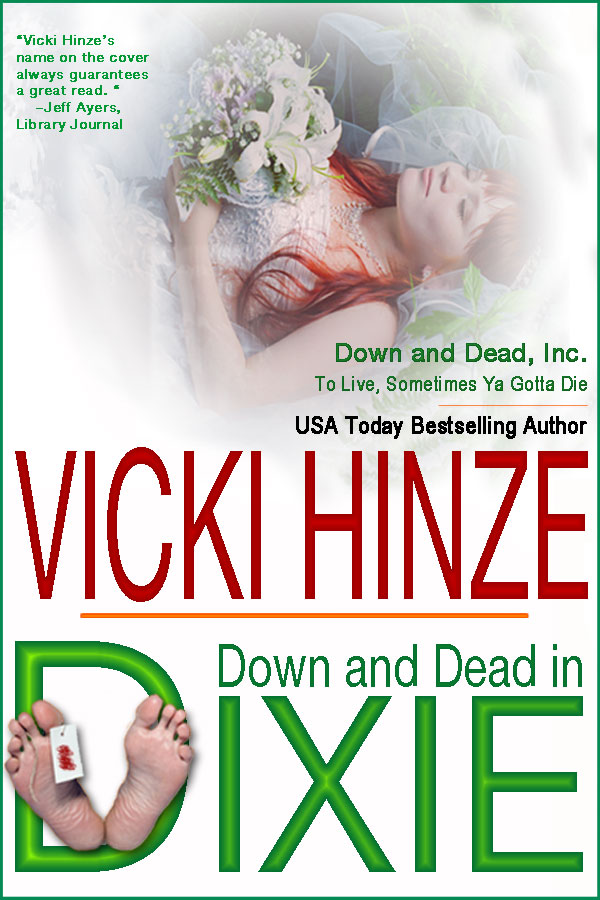 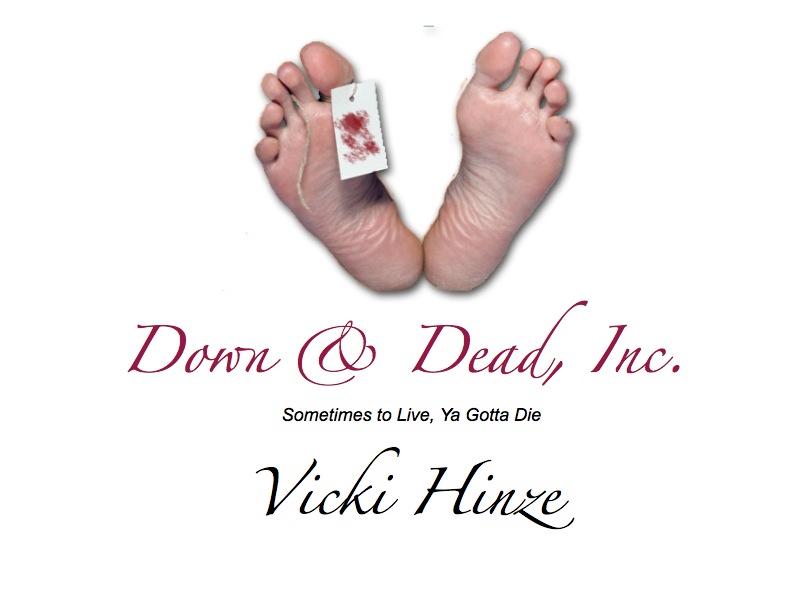 “Move over Janet Evanovich! Vicki Hinze is romping through Dixie’s criminal underbelly, and she’s bringing the sassiest heroine since Stephanie Plum. Down and Dead in Dixie is a rip-roaring page-turner that delivers laughs, fantastic characters and twists galore. This one is a must read!”

To live, sometimes ya gotta die! Daisy Grant is in a heap of trouble. She stumbles into a mob turf war and now somebody wants her dead. Daisy may be small-town to the bone, not at all the kind of woman to deal with the Southern Mafia, but she knows how to get creative fast!

Enters the way-too-attractive Mark Jensen…  He didn’t mean to rescue anybody, and he certainly didn’t mean to go on the run because of a stubborn, sassy woman.  Soon they are up to their ears in so many wacky characters they don’t know who’s on their side. Daisy and Mark decide that to live, sometimes ya gotta die.  And sometimes to die right takes . . . practice.

Clean Read.  This book is suitable for most readers.

Down & Dead in Dixie

If I’d known I was going to die today, I’d have worn more comfortable shoes.

I’m not fond of heels, but I have to wear them, and knee-length black dresses for my job. I’m a hostess at Biloxi, Mississippi’s best four-star restaurant, The Summer House, and believe me, I’m not a whiner and I’m not complaining about the black dress. If I hadn’t been wearing it, and I hadn’t bumped into the garbage dumpster left behind after Hurricane Katrina, and my dress hadn’t snagged on the rusty sucker (which probably had me flashing anyone caring to look), then the two jerks in the dark sedan who shot Edward Marcello dead on the street probably would have seen and shot me, too, and I’d have died then with him.

As it was, catching my hem was catching a break—odd for me, because my standard requirement to catch-a-break is to need both hands and a net to just miss out on any luck at all. I guess I was saving it all up for tonight.

So my dress snagged on the dumpster, I stepped back to keep it from ripping and hit a crack in the concrete. My heel sank and wedged in the crack—ruined my brand new shoe—I turned my ankle and went down hard, face first and kissed the dirt. Well, actually, I kissed the concrete. So I’m also sporting raspberry scrapes on my face, arm and knee. The ankle is shot.

That was the fall by Daisy Grant, Star Klutz (though usually I’m at least a little bit more graceful), which kept me from getting my chest blown open.

As it turns out, all I managed on the being murdered front was a short-term reprieve. Instead of dying on the street, I’ll apparently die elsewhere. But at least I get to pick the spot the second time, and for an orphan who’s been on her own since her sixteenth birthday (I’d maxed out on foster care and being forcibly separated from my only living relative, a baby brother, Jackson) getting to choose anything is pretty special. Even if it is something most people consider morbid like where you die.

Before you judge me, remember that this morning I had no idea I’d die at all. And I didn’t bring this on myself. I was just leaving work and walking to my car, minding my own business and not bothering anyone. Now listen, I work, I pay taxes, and since Jackson moved to Dallas last year, I call and check on him at least three times a week. I feed stray cats because I can’t stand the thought of anything being hungry (been there, done that, it sucked) and I don’t even gripe about Lester, the old man in the apartment next door who stomps around at three in the morning—he’s an insomniac; what’s he supposed to do at 3:00 a.m.?

Lester forgets his pants half the time but I don’t complain about that, either. Nobody’s perfect. So he’s forgetful; he can’t help it. I just bought him some new boxers. His briefs were kind of ratty anyway, and he’s pretty fond of dollar bills, so I figured he might remember to wear money-print boxers and, so far, it’s working out. The cops haven’t hauled him in for indecent exposure in almost two weeks—pretty harsh consequences for walking to the mailbox—and that means I haven’t had to go bail him out in almost two weeks. That’s progress, but it’s all beside the point. The point is I’m a reasonably good person. I didn’t ask for this fate twist. I didn’t want my fate twisted, and I sure don’t deserve it. Trust me, I’ve had a bellyful of that business already.

The thing is we don’t always get what we deserve, do we? More often than not we get what other people, who might or might not be good people, shove in our faces. They make us choose either to suck it up and take whatever they dish out or to kick up dust. Unfortunately, I’m not much good at sucking it up, and when I kicked up dust this time, I didn’t know who would be standing in the cloud.

Okay, I’ll take the hit for that. I should’ve looked first and I didn’t. I didn’t, and done is done. Now I know, but now it’s too late and there’s no sense whining about something you can’t change. All it does is make you sick inside and it doesn’t fix a thing. The bottom line is this dust cloud won’t settle . . . not so long as I’m breathing.

Some things you just never see coming. I mean, who could have expected something like this to happen at all, much less twice—in one day?

Yeah, if I’d known I was going to die today, I’d have worn more comfortable shoes.

New Release not yet eligible.
Readers’ Group Guide is not yet available.

Read:  How I nagged Vicki Hinze into Writing Down and Dead in Dixie by Daisy Grant

“A lovely recipe of suspense and tenderness seasoned with a clever wit that only Vicki Hinze could cook up!”  ~Debra Webb, USA Today Bestselling author
“Down and Dead in Dixie is an edge of your seat, thrilling suspense. It will give you laughing, crying and touching sweet moments.  You will love all the people in this book.  This is a great start to a new series by Vicki Hinze.”    ~Read Your Writes
“I’d recommend this story to anyone looking for a fun, exciting read filled with romance.” ~Hannah Alexander
“Hinze tells this clever tale with a wonderful, intelligent voice that I could listen to all day. Highly recommended!” ~Karla Miller
“This wonderful story shows off Hinze’s gift for humor without missing a beat on the romantic suspense. With dynamic characters and a non-stop plot, this is one book you don’t want to miss! I loved it!” ~ Regan Black

“Sometimes you get lucky and get to read a book that masterfully draws you in and leaves you with a great sense of contentment and compassion, a story that you remember and makes an impact that lasts over time. This is one of those stories, and a must read. Vicki Hinze is one of my very favorite authors, and this is one of her best!” ~Kristen, a Reader

“The best part of this story was that it is appropriate for any age and proves that you can write a successful story without adding graphic details. This is a very enjoyable book that I would recommend to anyone.”  ~Kimberly T. Ferland
“A book I recommend for a laugh and some food for thought. I was thrilled to see another side of this authors writing style. It was so much fun to read and laugh!” ~ Nora St. Laurent, Founder TBCN and Finding Hope Through Fiction
Released in Trade and Digital on May 4, 2014 by Magnolia Leaf Press. Thorndike Large Print Edition Hard/Soft cover release December 2014. 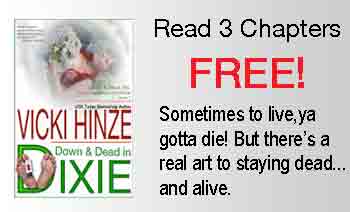